It’s week 142 of our new reality and it’s also the last week of the year for this roundup in 2022. So in this edition we are looking back on what we learned this year and also looking forward to how we can make the most of the year ahead.

In our first newsletter of 2022, as schools across the country were shuttering again in response to the Omicron wave, we opened with a quote from David Leonhardt: “For the past two years, Americans have accepted more harm to children in exchange for less harm to adults. In education, that has meant one disruption after another for children’s schooling, with the most disturbance and harm forced upon working class families.”

We fought hard over the past year, side by side with our partners, to put the focus back on the needs of kids. We also called for greater transparency from districts and states in reporting out how federal recovery funding would be spent, pledging that states in our network would make parents’ right to know this information a core part of their advocacy.

As 2022 draws to a close, we draw energy from the number of wins we have secured but also a sense of purpose from the huge amount of work ahead. Over the past year, we covered the historic drops in achievement shown on the nation’s report card, the failure of several blue states to provide timely information to parents regarding their children’s performance on state assessments and examined strategies that continue to show promise on digging out of this crisis: tutoring for all, summer programming that blends camp with academics and retooling literacy instruction around the science of reading.

2022 was a major year for 50CAN as well, with our campaigns achieving 26 policy victories, the successful inaugural cohort of the Believe in Better fellowship for elected leaders, new voices brought to the work with our fourth cohort of the National Voices fellowship, a new Executive Director in New Jersey and our annual summit in New Mexico, where we were able to experience the team’s multifaceted impact across the education system.

Stay tuned to your inbox, because this week we’ll be exploring more of these results:

In looking back at the year that was, we are determined to do even more for kids in 2023. Today, we look at two areas for recovery and reform that show deep promise if advocates begin working with elected and district leaders now to make them a reality.

We’ll be taking some time to finish up our work and recharge over the holidays, so the New Reality Roundup will return on January 9. We’ll have a lot to cover, including the ambitious set of campaign goals our teams will be pursuing in the new year, new opportunities to partner with 50CAN’s growing network of advocates and builders, the announcement of the fifth cohort of National Voices and a couple of surprises that we think will excite and inspire.

In closing, I’m reminded of G. K. Chesterton, who wrote in his autobiography: “I hope it is not pompous to call the chief idea of my life … the idea of taking things with gratitude, and not taking things for granted.”

We are grateful for traveling with us over the course of this year, striving to put all of our children first and for the progress we have made together in doing so. We look forward with hope to the year ahead and the opportunities to do even more to build the education system America’s children need and deserve.

“Perhaps no state in the country has had as successful a summer as Arizona when it comes to ushering in the future of the American education system,” we wrote in August, as we profiled the efforts of 50CAN board member Lisa Graham Keegan to bring a joyful, inspiring and impactful summer experience to the children of the Grand Canyon State.

It was an encapsulation of the central theme of this newsletter: that big ideas, strong leadership and hard work are all around us; and we need to spread and scale the best ideas, policies and tactics for implementation to do more for our children. Embracing greater summer opportunities for kids is proven to make a difference and 2023 should be the year this best practice becomes common practice in all 50 states.

A recent report from the Wallace Foundation found that the vast majority of school districts–94% in total–mobilized to provide some level of summer school, camps and other programming to students, reaching close to 1/5th of America’s children. Yet as noted in the Hechinger Report, even among that 20% the quality of summer school experiences is far from equal, with attendance and quality concerns limiting their potential impact.

That means that there’s a huge opportunity for states and districts in 2023, by not only scaling up their summer programs but placing a focus on engaging experiences that combine academic recovery with a sense of fun. RAND notes that a robust plan for attendance, at least three hours of academics a day and teacher quality are among the most important factors for high-quality summer programming.

Models already exist: Back in 2021, we profiled Josh Phillips, the CEO of Change Summer, who created a summer camp that blended traditional camp activities with academic enrichment for charter students in the tri-state area. This year Bloomberg Philanthropies  helped launch SummerBoost to offer full summer programming to the Big Apple’s charter school students.

A lesson learned across our network in 2021 and 2022 is that advocates have a key role to play in establishing and expanding high-quality programs. TEN’s Nicholas Martinez expanded summer tutoring in Colorado through the passage of HB1234, TennesseeCAN passed a law in 2021 mandating districts to provide summer learning for their students and JerseyCAN secured over a million dollars in funding for a summer tutoring corps that was so successful it was expanded to a year-round program.

For both advocates and school leaders, however, the planning needs to start now. In Arizona, where we previously covered former Governor Doug Ducey’s promise for the continuation of summer programming, officials have already announced their plans for free summer camps in 2023. Other districts would be wise to follow their lead in order to design the quality experiences that will attract and retain students.

Make 2023 the year of CTE breakthroughs

When we announced our Believe in Better policy framework, we identified the creation of clear pathways to meaningful careers as a needed building block for the American education system of the future. In doing so, we called for high schools to expand internships and work-based study programs, for dual-enrollment options to provide college credit and for high school graduation to be tied not only to college acceptance but also career credentialing as an alternative.

This has long been a priority for Executive Director David Miyashiro of HawaiiKidsCAN, whose partnership with elected leaders, universities and the business community created momentum for a number of bills that have strengthened the state’s offerings of meaningful career pathways, including an $2.6 million innovation fund for CTE programming and bills that mandated computer science education and funded universities to develop and train more computer science educators.

And now 2023 appears to be the year when innovations in career and technical education will breakthrough, with mayors and district leaders from Chicago to Washington DC captured by the promise of the programs. Expanding and strengthening these programs are a key priority for the majority of states in our network over the upcoming year, including in Hawaii, Tennessee, Colorado and Georgia.

The creation and expansion of these programs is only part of the work, however, as advocates will also need to share that new systems will address, rather than replicate, racial disparities that have long plagued vocational programs.

As Fordham’s Mike Petrilli wrote earlier this year, “We should embrace models from Germany, Switzerland, and Austria, where many sixteen- and seventeen-year-olds spend most, if not all, of their time in apprenticeships, at workplaces, while finishing coursework that purposefully connects academics to technical skills. We might, in other words, allow students to choose to finish their core academic courses after their sophomore year, and spend junior and senior years getting ready for the real world, as Maryland’s Kirwan Commission recommended.”

The team at NewMexicoKidsCAN are preparing to launch their new podcast, “New Mexico Rising.” Founder and Executive Director Amanda Aragon explains what it is all about: “For decades New Mexico has ranked at or near the bottom in education, a reality that’s become far too comfortable. But we know the story doesn’t end there.” Listen to the trailer and tap the follow button to be alerted when the first episode drops.

GeorgiaCAN launched an interactive data tool for parents and advocates to examine how school districts have spent the federal dollars provided by the American Rescue Plan. “A common thread with every parent we’ve met has been a desire to understand this information,” Outreach Director Steven Quinn tells us.

50CAN President Derrell Bradford moderated a panel on the science of reading featuring Emily Hanford, Kareem Weaver and Kymyona Burk at Excel in Ed.

HawaiiKidsCAN David Miyashiro was featured on the Hawaii Boss business podcast to speak about the state’s CTE innovations and students’ digital literacy.

Cohort 4 of 50CAN’s National Voices Fellowship completed their commitment, obtaining over 40 media hits including Real Clear Education, the 74 Million, EdSource and the Fort Worth Star-Telegram.

We re-read the hundreds of resources we shared over the course of 2023. Here are the top ten we think are worth revisiting:

APM Reports’ podcast “Sold a Story” featured powerful journalism by Emily Hanford, sparking a national conversation over how reading is taught and educators are prepared.

Brookings found low parent interest in and knowledge about tutoring, summer school and other learning loss recovery strategies, suggesting leaders have significant work to do to inform and excite families.

Chalkbeat provided one of the best overviews of the NAEP results and the two decades of student growth that were wiped out by elongated school closures.

Future Ed and 50CAN released the latest report in the AdvocacyLabs project, focused on what social simulations can teach public policy advocates. One big finding: the way an increasingly interconnected world through social media allows for the emergence of leaderless revolutions.

Harvard’s Center for Education Policy Research calculated that the economic cost of pandemic-era learning loss will be more than $900 billion.

Andy Smarick wrote about microschools for The Manhattan Institute, including how to expand and resource the growing sector.

EducationNext >looked at the growing and changing nature of homeschooling, diving into its history to understand its potential future.

Alexander Russo at The Grade spoke with education reporters about their reflections and lessons learned from covering the pandemic.

Transcend’s interviews and surveys with school-age kids found that students want more rigor, relevance, agency and choice in their education. 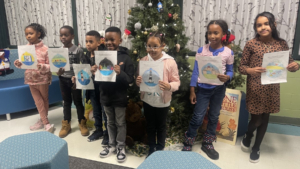 Students from Young Woods Elementary School in Providence, RI spent the last few weeks creating ornaments that will be displayed on a Christmas tree at the White House, with each ornament having a Rhode Island theme. Working with their art teacher, the students designed and then crafted their ornaments as part of the America Celebrates Ornaments Program.

While there will be many ornaments for the First Family to view, one student hopes President Biden pays particular attention to his: “I want to see if he likes it because I made it for him.”