It is week 134 of our new reality and we are reflecting on what we learned from the past week as the 50CAN team and our partners gathered together in New Mexico for the 2022 CAN Summit.

The Land of Enchantment certainly lives up to the name, not only because of the sheer beauty of the desert landscape but also the rich history, culture and community that powers the work of the NewMexicoKidsCAN team and its many partners throughout the state.

Reading through the comments on our end of summit survey, I found myself nodding in agreement with the reflections on the power of learning about a state through the love and commitment of local advocates and recapturing our sense of passion by uniting together with advocates across the country:

Last time in the New Reality Roundup, we took a hard look at state achievement data in DC and explored CRPE’s new report, The State of the American Student. This week we spotlight several reflections–told through four lessons and four photos–from the CAN Summit that we hope we all can keep front and center in the year ahead.

Be candid but optimistic about the challenges in front of us

NewMexicoKidsCAN Executive Director Amanda Aragon opened the summit by explaining how student achievement in New Mexico is the lowest in the country and walking through all the challenges facing the state. That kind of candor is far too rare these days, where leaders paint a happy face on the state of education rather than helping us all confront the truth.

The recently released New Mexico assessment results show only a quarter of children are proficient in math and only a third are proficient in reading. As Amanda, her partners and board members noted throughout the week, this is an emergency. 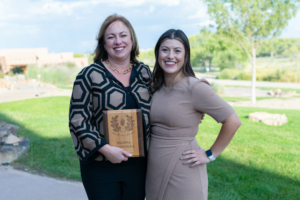 Despite this, throughout the week our discussions were infused with an optimism about the real progress that has been made over the past several years in New Mexico. Emerging signs of hope include the growth of high-quality charter schools, a focus on the science of reading and a growing parent movement to demand results for kids.

Many of these promising reforms took root more than a decade ago, when Hanna Skandera committed the state to change in her role as New Mexico’s Secretary of Education. Amanda started and ended the summit with a reflection on the key role Hanna played in the growing movement for change, including her mentorship during the crucial period when Amanda was getting NewMexicoKidsCAN off the ground. 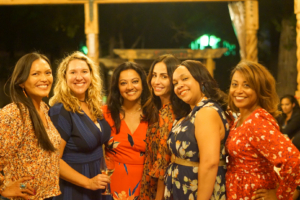 For the first time since 50CAN began the tradition of an annual summit, this year we made the choice to invite the entirety of the 50CAN community: not only our state advocates and national staff, but also our National Voices fellows, our fiscal sponsees and elected officials from across the country who make up the first cohort of the Believe in Better Legislative Fellowship.

That choice was a reflection of our belief that over the coming years we’re going to need dramatically more people, working together in ways that have a symbiotic effect on improving opportunities for kids. Whether it’s the alarming learning loss and chronically absent students or the demand from parents for an education system that’s fundamentally different, we need to create as many opportunities as possible to support a multitude of efforts to drive change in every community in our country.

Before the start of the summit, we gathered together the Executive Directors of our CANs with our national leadership team for a day of workshopping goals for the 2023 legislative session.

As we wrote in the Science of Advocacy, “advocates looking to maximize their impact should not aim for a series of small wins but instead shoot for a win worth fighting for.”

That lesson was clearly taken to heart. While our Executive Directors are still meeting with coalition partners and legislative champions as they continue finalizing their goals and plans, the draft presentations–from ESA expansions to CTE programs to giving students the opportunity to learn and receive credit from outside a school building–are focused on charting a path to a parent-controlled and student-centered education system of the future. 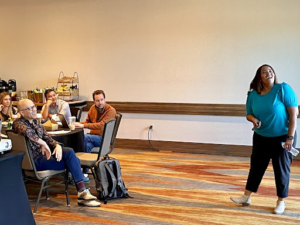 The 74 Million reports on Tennessee’s state exam results that show a return to pre-pandemic levels of reading proficiency. Intensive tutoring and implementing the science of reading are behind the growth.

The National Parents Union announced the grant winners for their EPIC program. Congratulations to the selected parent advocates.

Brightbeam’s Chris Stewart appeared on the State of Black Education podcast to discuss the failings of progressive cities in educating students of color.

Canva launched a series of graphic template resources for teachers, ranging from lesson plans to flashcards. 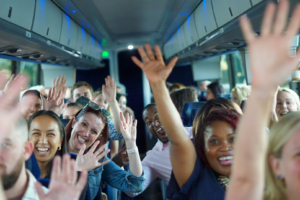 Members of the 50CAN community throw their hands up in a bus on the way to the opening of the International Albuquerque Balloon Fiesta. 50CAN was invited to watch the first balloons launch with two elementary schools in Bernalillo, New Mexico by superintendent Mathew Montaño. Watching the faces of the students light up as the balloons took to the sky will be memories we will never forget.