It’s week 114 of our new reality and while local leaders are working late into the night in statehouses to expand opportunities for kids and ensure a more equitable education for all, the Biden Administration seems determined to roll back opportunities for students of color in public charter schools.

“New rules proposed by the Education Department to govern a federal grant program for charter schools are drawing bipartisan backlash and angering parents, who say the Biden administration is seeking to stymie schools that have fallen out of favor with many Democrats but maintain strong support among Black and Latino families,” writes Erica Green in The New York Times. “Leaders across the charter school community have said the new requirements would quell the growth of such schools, which serve 3.6 million students — 69 percent of them students of color and two-thirds from low-income households — and have waiting lists of millions more…On Wednesday, an estimated 1,000 parents and advocates from across the country rallied at the Education Department and the White House in opposition of the rules.”

“The most revealing aspect of the administration’s rules is its defense of them—or rather, its lack thereof,” writes Jonathan Chait for New York Magazine. There has been little justification for the changes, which “impose a blizzard of new conditions for accessing funds for charter schools” and “unnecessarily onerous application requirements that will make it hard for small charter schools to comply” at a time when parents are desperate for options that can help their kids get back on track. “Hopefully, the administration will grasp the damage it is incurring and rethink its proposal.”

The conclusion of Erica Green’s story captures the intense frustration felt by so many who share that sentiment through a quote from Naomi Shelton, the chief executive of the National Charter Collaborative, which supports charter school leaders of color: “The people who are fighting for this don’t even look like the folks who would be impacted. And the students who come to us are not students they’re even engaging with.”

Last time in the New Reality Roundup, we highlighted a big win by TennesseeCAN in shifting the way the state funds schools to a student-centered model, and looked at the promise of the Kahn World School, a new program that matches mastery-based online curriculum with coaching, tutoring and small group discussions.

This week, we look at the progress being made in career and technical education, and the importance of advocates participating in the upcoming elections.

When people hear “career and technical education” (CTE), their minds may drift back to their own time in school and the idea of a woodshop class tucked away in a forgotten corner of the building. But work is underway in states across the country to rethink what CTE can be to help parents and their children in what they often say is their top goal: to secure the skills and experience needed for meaningful careers in our modern economy.

One state campaign leading the way forward in this work is HawaiiKidsCAN. Last year, under the leadership of Executive Director David Miyashiro, it passed a law that requires clear reporting on how schools are or are not preparing students for the workplace, significantly expanded access to computer science education courses and created WiFi On Wheels, a program to bring internet access to rural areas of the state.

In the recently completed legislative session this year, David and the HawaiiKidsCAN team built upon these wins by passing three new bills that shift computer science from an elective to a core graduation requirement, provide $1 million to the University of Hawaii to prepare computer science educators, create a $2.6 million innovation fund for schools that assist students in obtaining industry-recognized credentials and establish a new program focused on making digital learning more accessible to individuals with disabilities. The team also modernized the requirements to serve on the State Board of Education in a way that ensures that the business community and leading industries will be better represented so their perspectives help drive a more relevant and rigorous CTE program.

“With computer science, CTE certification and minimum requirements of the Board of Education, these bills are going to help our keiki for years to come,” Senator Donovan Dela Cruz celebrates. “A big mahalo goes out to David Miyashiro and HawaiiKidsCAN. Their efforts and support really helped get the bills past the finish line.”

“We’ve assembled excellent partnerships between the business and civic communities with educators and elected officials, and it’s allowed our state to be leading the charge in infusing career and technical education through the entire system, instead of just a single school site,” David shared.

Engage in elections now to make legislative change in the future

With the 2022 midterm elections still months away, many Americans may not have noticed the school board elections in Delaware that occurred last week. Yet the results in the First State add to the evidence that voters are ready for something different. Four of DelawareCAN Action Fund’s endorsed candidates were successfully elected, including three who defeated incumbent candidates in tight contests. One of these races was decided by just 26 votes, a reminder of how important every vote can be in local races and what a difference getting involved in politics can make. “As a result of these races,” DelawareCAN Action Fund Executive Director Britney Mumford said, “we have increased leverage to fight for student-centered changes that families are hungry for.”

As 50CAN Executive Vice President Jonathan Nikkila wrote in the free The 50CAN Guide to Political Advocacy, “You make your job so much harder if you are not involved in electoral politics. In many cases, your issue is doomed before it starts because, for whatever reason, the elected officials who are in office simply do not agree with you … by identifying, recruiting and supporting candidates that share your vision, you can help blaze a path to your legislative advocacy success.”

Tomorrow, May 17, Jonathan is hosting a free webinar at 2pm ET on the top 10 simple tactics that advocates who are relatively new to politics can implement this year if they want to impact elections.

Over the course of the summer and fall, we will continue to share stories about how education advocates are engaging in the upcoming elections–from school boards to state legislatures– and what the outcomes will mean for kids.

The team at ConnCAN achieved a pair of wins in the current legislative session. One bill builds on the team’s work to diversify the teaching force in the state by establishing a minority teacher scholarship program, with grants of up to $20,000 available to interested high school graduates while also easing the requirements for teachers from other states to begin teaching in Connecticut. Another directly addresses student mental health by providing rapid and mobile behavioral and mental health services for children in a program that will be available 24 hours a day.

Last month, we profiled CarolinaCAN’s Marcus Brandon and the importance of his work to educate parents on their options. Like parents, however, schools need assistance in navigating scholarships and tax credits as well. At GeorgiaCAN, Outreach Director Steven Quinn continued these efforts by hosting a call with over 60 school representatives to provide information and ease the navigation of the approval process to accept Special Needs Scholarships.

NewMexicoKidsCAN’s Amanda Aragon was celebrated by her alma mater, the University of Tulsa’s Collins College of Business, as a recipient of the Outstanding Alumni award for her work advocating for improvements to New Mexico’s school system. In addition, she and her Student Success Coalition partners received a 2022 Great Grant from the Albuquerque Community Foundation.

The National Alliance for Public Charter Schools announced the recipients of their 2022 Changemaker Awards, featuring educators from across the country who have an outsized impact on kids.

FutureEd profiled the deputy chief academic officer at a Dallas school district that is extending their school year to start in early August and end in late June.

Brookings spoke with the leaders of six major school systems, finding that they all believe major changes are needed for schools and individual classrooms in order to recover from the pandemic.

Urban Institute is out with a new report looking at the beneficiaries of New York’s Excelsior Scholarship that provides free college. Among the findings: the majority of scholarships are going to middle-income families. 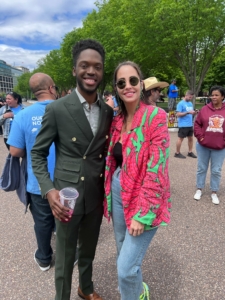 AFC’s Walter Blanks (an alumnus of 50CAN’s National Voices fellowship) poses for a photo with Oakmont Education’s Cris Gulacy-Worrel (a current member of the fellowship program) at a Washington DC rally for National Charter School Week. Alumni of the fellowship are an increasingly important part of the growing movement to create an education system of the future that empowers families with limitless options.