“Every weekday morning, Sharde Mercier drives her daughters, Aleeah, 8, and Alyssa, 10, past their old neighborhood school in the Alum Rock Union School District to get to a charter school in San Jose,” writes Kayla Jimenez for the Mercury News. “When she toured Rocketship Fuerza Community Prep one month before schools closed due to the pandemic, she was immediately sold on the school’s cultural diversity and parent involvement …More and more, Bay Area families – rich and poor – are opting out of nearby public schools in favor of charter, private or homeschool.”

It is one of the many trends in education that was already in motion before the pandemic but was accelerated by the disruption to normal routines and the choices made by traditional districts. Our challenge in this new reality is to find ways to guide all these changes into a new, more just era of education where we break down the old barriers while expanding opportunities for all kids.

Last time in the New Reality Roundup, we focused on the opportunity to make summer a much more central part of that student-centered recovery plan, and the importance of insisting that any additional federal funding go directly to helping those students most hurt by our response to the pandemic.

This week we look at the continuing student absenteeism crisis in our schools and the importance of educating parents on their options.

“School leaders across the country are struggling with a wave of chronic absenteeism that’s worsened over the course of the pandemic,” reports Mark Bomster for Education Week. Chronic absenteeism is declared when a student misses more than 10% of the school year for excused or unexcused absences, which for most states translates into 18 days or more of missed school. A persistent problem even before the pandemic, when 1 in 7 students across the country were chronically absent, the issue has grown over the past two years to the point of crisis we find ourselves in now.

In New York City, more than 4 in 10 students have been chronically absent this year and those numbers might not even capture the full extent of the crisis. “The rate is likely worse because principals say schools were told to mark Covid-stricken or quarantined students present if a teacher or administrator simply made contact with the kids or their parents in an email or phone call,” the New York Post writes. “‘We were told they have to be marked present no matter what,’ a Brooklyn principal told The Post.”

This is the latest chapter in a problem that emerged in the first weeks of the pandemic. In the fourth issue of this newsletter, published April 5, 2020, we implored district leaders to “find the lost children” after noting that 40,000 students in Los Angeles were not attending online class or had any meaningful contact with their schools. That problem has only grown in size in the nation’s second largest city, with the Los Angeles Times reporting that nearly half of students in the district–over 200,000–have been chronically absent this year: “In the three years just before the pandemic the district’s chronic absentee rate, already considered high, averaged about 19%. This school year it has been about 46%, according to the data provided to The Times in mid-March.”

In Akron, Ohio the percentage of chronically absent students has increased 40 points this year. In Camden, New Jersey the rate is nearly 60%. It is clear that this is a nationwide problem that isn’t going away on its own.

Educate parents on their options

“In the past year, I’ve met with so many parents with students with special needs who are incredibly thankful for the legislation that we expanded last year,” Marcus Brandon, executive director of NorthCarolinaCAN tells me. “But for every parent I’ve met with, I know that there are so many others that could take advantage of our state’s special needs scholarship if they knew about it and how it worked.”

Marcus points out one of the most important lessons in advocacy: passing a law is just the beginning. “The state has made an effort to inform parents of the options, but there’s so much more that needs to be done,” Marcus shares. That’s why, with the legislative session nearing a close, Marcus is turning his full attention to informing parents of the education options available to them and ensuring that they have the tools and resources needed to apply for and access these choices.

“I have particular concern about low-income parents of color throughout the state, many of whom live in what could be called information deserts,” Marcus points out. “We need to give them access to the same information that wealthier families have received through their networks.”

As legislative sessions across the country reach or near their close, our local advocates are making the final push to get priority bills across the finish line and raising public awareness through powerful op-eds and other communications. In Colorado, Transform Education Now’s Executive Director Nicholas Martinez penned a powerful piece on the need to immediately improve Commerce City’s schools.

HawaiiKidsCAN is also making progress on four of their priority bills which we covered extensively in a previous issue of this newsletter. The four bills, including a direct aid bill that will put money for educational expenses in the hands of parents for tutoring and other services, have passed out of their chambers and are now in the conference committee.

Amanda Aragon, executive director of NewMexicoKidsCAN, wrote a piece for the Albuquerque Business First journal where she called on the business community to take a more active role in solving problems throughout the education system. She was also profiled by CharterFolk, where she expressed her confidence that she’s never been more convinced that change is possible.

The 2022 Cohort of the National Voices Fellowship (Cohort IV) will be announced this Thursday. Stay tuned to meet a tremendously impressive group of emerging education leaders.

A Brookings Institution report finds that the expansion of the child tax credit resulted in a number of positive results including “long term educational investments for both parents and children.”

Writing for FutureEd, Greg Toppp, Jo Napolitano and Tom Toch examine the rise of the new generation of parent organizations in education.

CRPE explores the growth of the learning pod ecosystem during the pandemic and lessons learned for ensuring equitable access.

The Fordham Institute explores how to create a fairer system of measuring schools’ impact on student attendance and makes the case for a value-added approach.

In Education Next, Daniel Hamlin and Paul Peterson examine the rise of homeschooling during the pandemic and how an option that once looked like a throwback to the past increasingly looks like the future. 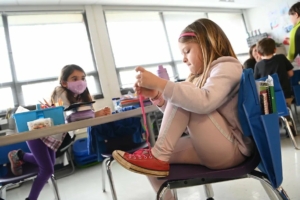 When Fairfax County first-grade teacher Christine Jarboe welcomed new students to her classroom this fall, she was shocked: “You’d say, ‘Okay, can you show me how to tie your shoes?’ and most of them would just kind of look at me, like, really confused,” Jarboe said. “They really weren’t sure even where to start.” Here, her student Lucy demonstrates her new skills, while reminding all of us of the importance of educators and the hard work ahead.