“A thundering boom rocked Tatiana Poladko’s home near Kyiv as she slept a week ago. Terrified, Poladko awoke with a feeling of doom,” Cris Barrish writes for NPR’s WHYY.  “Poladko, her husband Atnre Alleyne, and their children — Zoryana, 7, Nazar, 3 and Taras, 2 — returned to her homeland last year. Her mother Lyudmila died in 2020 and Poladko left Delaware to be with her father Eduard, who has health issues.”

Atnre was a 50CAN Education Advocacy Fellow in 2016 and served as the founding executive director of DelawareCAN from 2017 until his family moved to Ukraine last year. His updates on his family’s harrowing experiences have served as a constant reminder to the 50CAN family of the dangers all families in Ukraine are now facing.

“By the time they left, Ukrainian troops had flooded the area around her town in hopes of repelling a possible Russian attack, blocking off the route they had planned to drive,” Barrish writes. “The next stop, they hope, is Poland or southwest into Hungary, and maybe then to a US Embassy … Returning home to Delaware might not be an option now, however. Her father needs her assistance and does not currently have the proper paperwork to travel to the United States.”

At times like this, it can be difficult to know how to help. Atnre and Tatiana have suggested a Linktree page on Ukrainewith places to donate money, ways to get involved as an advocate, opportunities to support refugees and more. They have also shared a GoFundMe page specifically organized to support Afro-Caribbean students fleeing Ukraine. Finally, friends and supporters have also organized a fundraiser for Atnre and Tatiana’s nonprofit, TeenSHARP, which, to-date, has helped more than 400 students on their path to college.

If you are looking for a way to do something, I hope you will join me in making a contribution and using the Linktree page above to get more involved.

Last time in The New Reality Roundup, we called attention to the importance of holding the line on learning time, as well as a unique opportunity for aspiring education leaders who want to raise their voices on behalf of kids.

This week, we offer a snapshot of our local campaigns currently in session, with a key victory in New Mexico and meaningful progress in Hawaii and Georgia.

At the beginning of Hawaii’s 2022 legislative session, HawaiiKidsCAN Executive Director David Miyashiro laid out four priority bills. Now, as the session reaches the midpoint, David shares an update: “Every one of our four priority bills aren’t just alive, they’re building momentum. We feel that we’re on the verge of making some big changes.”

Taken together, the four bills have passed out of 16 committees, setting them up for final votes on the floor.

“After two years of disruption, these bills collectively represent a new chapter for Hawaii’s children,” David tells me. “Imagine a world where every child throughout the Aloha State gets the resources they need to be academically successful through direct funding and one that recognizes the opportunity that exists in Hawaii’s growing technology and business communities, jobs that will be filled by students after graduation, given their participation in credentialed programs. Every kid in Hawaii should have a career that’s right for them and that requires outside-the-box thinking that creates more capstone pathways than college graduation.”

NewMexicoKidsCAN’s Executive Director Amanda Aragon and the New Mexico coalition of vision-aligned advocacy groups achieved an important win last week when Governor Grisham signed HB43 into law. As Amanda explains via NewMexicoKidsCAN’s newest project, NMEducation.org, the governor did so only after unanimous passage in the legislature and the signing of the bill was left out of her public event where other education bills were signed.

The new law does two important things. First, it expands the amount of facility funding available to high-quality charter schools by creating a new, $10 million fund to use for low-interest loans. Second, it modernizes the approach for how schools are reimbursed for facility funds to both strengthen and streamline the process.

“Prior to this bill becoming law, charters were being reimbursed by the amount of instructional square footage,” Amanda shared. “That led, of course, to a lot of illogical discussions that weren’t serving kids: is this just a cafeteria or is it also an art room? How many classes need to be held in the gym in order for it to count for our facility funds. The new law doesn’t just add significant money to the pot, it also reimburses schools for facilities based on a per-student amount instead of the nonsense of instructional square footage.”

That wasn’t NewMexicoKidsCAN’s only victory of the week. The organization also supported the efforts of school leaders to ensure passage of HB13, which expands eligibility for teacher residency programs. With the bill passed, NewMexicoKidsCAN will convene a network of high-quality schools that will create their own residency program, giving them the ability to develop their own future educators in ways that align with their curriculum and values.

Right on the heels of GeorgiaCAN releasing a poll showing that 72% of Georgians support education dollars following students to the school of their choice, the team is making progress in its effort to secure passage of HB517. The bill would double the size of the state’s tax credit scholarship to $200 million over the next five years. “If we’re successful,” Outreach Director Steven Quinn tells me, “this would make Georgia competitive with Florida and other leading states in embracing a parent’s right to choose the schools that work best for their kids.” HB517 passed a full-vote in the Georgia House last Thursday and now heads to the Senate.

TennesseeCAN’s Victor Evans has been instrumental in shaping a proposal announced by Governor Lee to reform the student-based funding formula. As chair of the Economically Disadvantaged Students Subcommittee, Victor advocated for the formula to include weights for economically disadvantaged, SPED and ELL students and nearly every one of his recommendations was accepted by the Governor, who Victor appeared with at a press conference. The proposal heads to committee with the first hearing later this week.

In Colorado, TEN’s Co-Executive Director Nicholas Martinez was appointed to serve on the state’s charter authorizing board after a successful confirmation hearing.

JerseyCAN released a new poll on parent views in the wake of the pandemic and Co-Executive Director Janellen Duffy published an op-ed discussing the results, including the fact that 63% of parents want to see federal funding utilized for bold changes rather than a return to normal.

yes. every kid’s Adam Peshek asks, in a new blog: “Why not also figure out how to support 100 ten-student environments while also focusing on transforming the big school down the road?”

FutureEd and The 74 Million continue their analysis of how districts and charter networks intend to spend the federal stimulus dollars, with academic recovery and facility improvements topping the list.

The 74 Million also looks at how Ukrainian-born students are struggling to balance their studies with news of war.

Writing for the Manhattan Institute, Andy Smarick explores the policies that can help support microschools.

Professor Morgan Polikoff publishes a new report for CRPE focused on the pandemic’s effect on curriculum, with a particular focus on rigor.

The RAND Corporation looks at which type of credentials actually pay off for students in the marketplace.

The Los Angeles Times examines why public perception of schools in California is nosediving, with over a third of parents rating schools as a D or F. 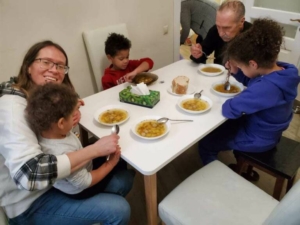 After a long journey, Tatiana Poladko, her children and her father, Eduard, were able to enjoy some food at a friend’s apartment in Lviv. “It’s perhaps naïve,” she shared, “but I’m really, really hoping that there’s going to be a world in which, in the next couple of months, we may be able to come back to our home in Ukraine.”