It is week 108 of our new reality. For many students across the country, there are only two full months left before summer break begins. Summer, traditionally an educational afterthought, has emerged as much more important as we try to help kids get back on track from a third disrupted school year. We know we are just beginning to scratch the surface of the problems created by the disruptions to their lives.

“New research from the Centers for Disease Control and Prevention on adolescents’ mental health during the coronavirus pandemic suggests that for many teenagers who were ordered to stay at home, home was not always a safe place,” writes Ellen Barry in the New York Times. “Under normal circumstances, clinicians would ‘mobilize support to those families and really wrap around them and provide people in the home with resources’ … But during periods of intense spread, public health conditions required much more isolating at home, which is ‘exactly the opposite of what we try to do for kids who are at risk.’”

The result? “After much of the country went into lockdown, emergency room visits for suicide attempts rose 51 percent for adolescent girls in early 2021 as compared with the same period in 2019 … A CDC report released in February found that emergency room visits by teenage girls relating to eating disorders had doubled during the pandemic … More than one in three high schoolers experienced poor mental health, with 44.2 percent reporting persistent feelings of sadness or hopelessness.”

We can’t turn back the clock to ensure a response to the pandemic that made students’ overall well-being much more central to our plans and provided them with the connections they needed outside the home, but after all the mistakes we made, we owe it to these students to do much more right now to help them get the support they deserve.

Last time in the New Reality Roundup, we took stock of the learning losses from two years of disruption and the new policy ideas, such as a grant program in Tennessee, that are pointing the way forward.

Today, we focus on the opportunity to make summer a much more central part of that student-centered recovery plan, and the importance of insisting that any additional federal funding go directly to helping those students most hurt by our response to the pandemic.

Give kids a great summer

“At least 17 Governors emphasized the importance of efforts to support students in their academic recovery, including through afterschool and summer learning and enrichment opportunities,” reports the National Governors Association Center for Best Practices, after analyzing every one of the State of the State addresses across the country.

Yet, whether all these promises translate into real summer opportunities for all kids is still unclear.

What does seem clear is support for families is unlikely to come from an expansion of the school calendar. “Chalkbeat reviewed 45 large districts’ spending plans and found that while virtually all of them mentioned more afterschool or summer school programming, very few planned to add minutes or days to the normal calendar,” reports Matt Barnum. “That means that although most American students have fallen behind academically due to the pandemic, only a subset appear likely to get more school time. Some fear that this take-it-or-leave-it model could leave many kids behind.”

Last year, we looked at the important role that free summer programming and camps could play in providing socialization activities that would support students after a year of isolation, including an interview with Josh Phillips, the CEO of Change Summer, who spearheaded a new summer camp initiative for the Achievement First and Uncommon Schools Charter Network. “We are kidding ourselves if we think only academics will level the playing field … This is about kids from under-resourced communities being able to be themselves … and just have fun,” Phillips told me in an interview.

Across the country, civic and philanthropic institutions are stepping forward to provide families with many more free opportunities to make the most of the summer. In Philadelphia, the William Penn Foundation is providing $4.6 million to offer 22 free programs to students, from swimming lessons to literacy programs run by the Free Library of Philadelphia. In Pittsburgh, local officials have focused their energy on providing unique career opportunities for low-income students of color, including learning opportunities for students interested in education, architecture and health professions.

With the school year ending for many students in just over two months, education leaders and advocates don’t have any time to waste in getting their summer programs in front of families so they can decide on the best opportunities for their children.

After commiting $190 billion in new funding to states and districts for education as part of the American Rescue Plan, the White House is calling for an additional $20 billion in new Title I funds to support low-income students, alongside a slew of other funding proposals. The proposed package includes, “$350 million to improve school staff recruitment and retention; $1 billion to double the number of school counselors, psychologists and social workers; and $438 million in new funding for community schools with wraparound services for students,” reports Mark Lieberman for EdWeek. US Secretary of Education Miguel Cardona stressed the urgency of delivering additional funds in a statement last Monday, saying it was needed to support students through pandemic response and recovery.

It sounds like the kind of initiative that could make a difference in students’ lives, but given the lack of transparency in the past several rounds of federal pandemic spending, it’s worth asking: will this new round of funding actually make a difference for kids?

One big problem is that schools haven’t spent much of the funds already passed. “Across the country, schools are struggling to spend their Covid relief dollars as quickly as planned,” writes Matt Barnum for Chalkbeat. “Their efforts are running up against a national labor shortage and supply chain issues … When the consulting firm Education Resource Strategies recently surveyed officials in 21 large school districts, nearly all said they were behind on their plans for spending federal dollars.”

For example, “In Jefferson County, Colorado, a suburban area outside Denver, chief financial officer Brenna Copeland says the district had wanted to hire family engagement liaisons to help schools work with parents. But officials realized they couldn’t fill many of the positions they had posted at the beginning of the year, much less hire more.”

One problem may be the federal approach to helping students is too restrictive, with the Biden Administration trying to send nearly all the money through school district bureaucracies that struggle to quickly adapt to new plans.

In the initial months of the pandemic, 50CAN issued a report, Fund Everything, which called for increased federal aid to school districts but also a much more expansive approach to supporting education that included providing education aid directly to families. That kind of innovative thinking has led to bills under consideration right now in red and blue states alike, but appears to have been sidelined in the Biden Administration by special interest groups who see it as a threat to the old way of doing things in education.

ConnCAN’s top priority this legislative session has been to build on last year’s momentum to address inequities in how the state funds its schools. Their student-centered funding bill, HB5283, funds every student based on their individual learning needs regardless of school type, and reduces the racial funding gap by over 40% in the first year. The bill passed out of the education committee and is heading toward a full vote on the House floor. Buzz is beginning to build, with the Hartford Courant running an above-the-fold feature on the legislation and WTKR running an on-air story that features Executive Director Subira Gordon.

TennesseeCAN is also making progress in its push to simplify and improve the state funding formula, a key priority for Governor Lee, who tapped Executive Director Victor Evans to help lead the reform. The Tennessee Investment in Student Achievement Act provides even greater funding to economically disadvantaged students and requires districts to not only report how they are performing against key metrics but also how they will spend the resources. Victor’s op-ed in support of the bill appeared in both the Tennessean and the Knoxville News Sentinel.

GeorgiaCAN’s recent poll–which found that 73% of Peach State respondents approved of state education dollars following a student to the school of their choice–was the anchor for an op-ed on The Center Square.

EdChoice released a poll of parents of children with special needs, finding that two-thirds of these parents wanted to homeschool their child at least one day a week.

Annenberg Institute is out with a new brief that presents research-based strategies for reducing chronic student absenteeism.

FutureEd discusses where standardized testing stands after two years of disruption during the pandemic.

Fordham’s Chester Finn laments a recent school board vote in Denver that will limit innovation and discusses the challenges of strategies that embrace “charter-lite” school models. 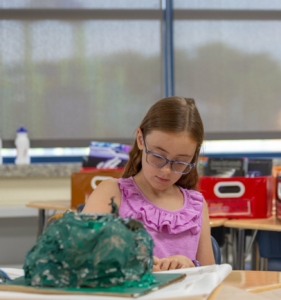 A student in Tulsa, Oklahoma’s Ready. Set. Summer! program works on a project to construct a volcano and chart her findings. The program mixes learning and camp-like activities in a partnership between Tulsa Public Schools and the Opportunity Project, a community organization that provides youth activities and additional summer programming. From sword-fighting clubs to remedial instruction, the district hopes that enrollment for the 2022 program will reach over 10,000 kids.