We are now in the first week of year three of our new reality.

Over the past two years, we’ve used this newsletter to spotlight how to keep learning going when schools closed, focus attention on children missing from the system, celebrate innovative efforts to connect families with food and resources, share the insights of countless experts and local advocates, launch a whole new approach to our policy goals, express concern over signs of a worsening mental health crisis among kids and take stock of the dramatic and tragic learning loss that resulted from extended school closures across the country.

After two years of constant disruptions, poll after poll, including ongoing tracking polls by the National Parents Union, show that parents are ready for a school system that feels tangibly different. At 50CAN, we’ve embraced that opportunity by setting goals aligned to our Believe in Better policy framework, updating our strategic plan to meet the moment and joining with partners to marshal our collective efforts around an emerging new vision for the education system of the future. We believe this third year of our new reality can be the one where the school system of the future takes shape.

Last time in the New Reality Roundup, we offered mid-session updates on our local campaigns, with deep dives into Hawaii, Georgia and New Mexico.

Today, we take stock of the learning losses from two years of disruption and the new policy ideas, like a grant program in Tennessee, that are pointing the way forward.

“Two years ago this month, schools closed their doors in 185 countries,” writes Anya Kamentz for NPR. “According to UNESCO, roughly 9 out of 10 schoolchildren worldwide were out of school. It would soon be the biggest, longest interruption in schooling since formal education became the norm in wealthier countries in the late 19th century.”

After a few months, most countries moved to reopen their schools by categorizing them as essential services, but America chose a different path. “In the United States, compared with wealthy countries in Western Europe and East Asia, schools were typically closed longer,” Kamentz writes. “A majority of Black, Hispanic and Asian students stayed remote through early 2021.”

It will take years to fully understand the consequences of this choice, but perhaps USC Professor Morgan Polikoff put it best when he wrote: “I don’t think even the most alarmist takes have really captured the scale of the catastrophe.”

A new story by Perry Stein for the Washington Post provides one window into this crisis. Using results from the DIBELS (Dynamic Indicators of Basic Early Literacy Skills) exams administered in fall 2019 and fall 2021, the Post reports that the percentage of Black students in DC schools scoring proficient in literacy dropped from 44% in 2019 to just 28% in 2021. By contrast, rates for white students dropped only three points from 73% to 70%.

Put another way, the Black/White literacy gap in DC jumped during the pandemic from 29 points to 42 points. You might think DC Council members would have a lot of questions about these shocking results. You would be wrong.

“The literacy scores were published last month as part of a large data dump ahead of the DC Council’s oversight hearings,” writes Stein. “The council questioned the DC schools chancellor for more than two hours about topics including school nurses, teacher recruitment and out-of-school programming, though never asked about the literacy scores.”

Stein did ask questions for her story. In response, Alison Williams, the deputy chief for content and curriculum at DC Public Schools, responded: “Our second graders hadn’t been in regular school since kindergarten. We know for a fact that in-person instruction is critical, and the results of that are seen in some of the data.”

HawaiiKidsCAN Executive Director David Miyashiro was invited by Representative Ed Case to speak on digital equity and how the state can spend more than $100 million of federal funds to advance broadband connectivity throughout the islands.

GeorgiaCAN’s Outreach Director Steven Quinn and his coalition partners are helping parents make use of the state’s special needs scholarship program by launching a resource site, Facebook group and providing a calculator where parents can determine the amount in real dollars they can obtain from the scholarship program. Steven is also hosting a call this Wednesday for Peach State parents seeking to obtain scholarships.

DelawareCAN Executive Director Britney Mumford created a legislative scorecard that tracks how state legislators have voted on priority bills, along with the rationale for DelawareCAN’s support or opposition. “We’ve had a tremendous response to the scorecard so far,” Britney shares, “and more is coming soon, including tracking votes related to transparency around federal spending.”

Transcend shares a case study of the school redesign effort at Van Ness Elementary School in Washington DC with a focus on SEL and student well-being.

The 74 Million chronicles two years of Covid through a series of interviews with parents, educators, students and researchers.

The Grade’s Alexander Russo speaks with journalists about their reflections covering two years of schooling during the pandemic, and finds many still needing time to process their reflections.

CRPE interviews the leaders of five school systems to understand, in their own words, the challenges of responding to student needs through the pandemic.

The Urban Institute examines disparities in AP course enrollment and testing, finding that there is a gap between Black and Hispanic students relative to their white peers in every state in the country.

Brookings asks why education, unlike other industries, isn’t seizing upon technological advancements to disrupt and evolve learning even after the Covid-19 pandemic. 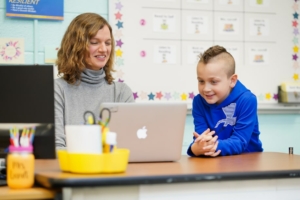 Graydn Betz, a second grader at Atholton Elementary School in Columbia, MD meets with his teacher Monika Locraft. Graydn lost both his uncle and father to cancer in 2019, leading to panic attacks that were turning a corner until the pandemic hit. “Illness and death were everywhere, and so was Graydn’s fear,” the Washington Post reports. That fear turned around after Graydn established a one-on-one connection with Ms. Locraft, who made him feel safe. Now a third grader, Graydn is thriving, and he and his mother nominated Ms. Locraft for an award in recognition of her love and support.