“American children are starting 2022 in crisis,” writes David Leonhardt in The New York Times. His clear-eyed recitation of the facts is required reading as we prepare for the work ahead:

At the core of all these problems is one common thread: “For the past two years, Americans have accepted more harm to children in exchange for less harm to adults.” In education, that has meant one disruption after another for children’s schooling, with the most disturbance and harm forced upon working class families.

While many of us had hoped that the 2021-22 school year could be one of recovery for America’s schoolchildren, it increasingly looks like this will be a year where they slip even further behind.

Last time in the New Reality Roundup, we focused on the facts about Omicron and the progress education advocates made across the country in 2021. This week, we argue that in order to move to recovery, we urgently need to reopen schools and keep them open through the rest of the school year. We also explore whether the huge influx of federal dollars that was meant to keep schools open and help students in need is actually doing so.

As the old adage goes, “If you find yourself in a hole, stop digging.”

The harm done by the school closures of 2020-21 are currently being compounded by a new wave of closures in 2022. “More than one million of the country’s 50 million public school students were affected by districtwide shutdowns in the first week of January, many of which were announced abruptly and triggered a wave of frustration among parents,” Dana Goldstein and Noam Scheiber report in The New York Times. “As has been true throughout the pandemic, most of the temporary districtwide closures — including Detroit, Cleveland, Milwaukee — are taking place in liberal-leaning areas with powerful unions and a more cautious approach to the coronavirus.”

The costs of districtwide closures were also made apparent by a Washington Post profile this past weekend of parent Latoya Hamilton, who “had just taken a job as a medical assistant when she got a notice last week that her daughter’s school was going online temporarily. The single mother asked for time off. When it was denied, she did the only thing she could: quit.”

At 50CAN, we know there are many parents who want and need in-person instruction for their kids, and we support them in that desire. Every family deserves an education system that meets their needs.

Shuttered school buildings fall into two categories with different challenges and solutions. First, there are districts that preemptively shut down, as a result of concern over community infection levels or union pressure. This is the case for the most sweeping closures, including the suburbs of Washington DC, Newark, Detroit, Milwaukee and Chicago.

Reversing these closures will require strong local leadership that recognizes the essential service provided by in-person education. As New York City Mayor Eric Adams argued when he held the line on keeping schools open last week: “The safest place for our children is a school building.”

This leadership also came from Baltimore’s school chief Sonja Santelises, who held to a commitment to keep schools open at a press conference: “We will continue to persevere in these efforts because we know that schooling is critical for our young people,” Santelises said. “The last two years have shown that young people need to be in school and we have the means to do this safely. And we will continue to adjust as the conditions change.”

It also means keeping the needs of kids and their families front and center in our conversations about schools, as Giulia Heyward did in her New York Times article on the fallout of the school shutdown last week in Chicago: “The possibility of more online school for John Christie’s fourth-grade son, Ian, is enough to bring Mr. Christie to tears. Mr. Christie said his son, who has been diagnosed with autism, thrived with the schedule that in-person instruction gave him during the fall. But in earlier parts of the pandemic, when school was online, Mr. Christie said, the circumstances were dire for his son and for the family.”

The second reason that school buildings are closing reflects the upheaval being felt across many industries: staff shortages triggered by ill or quarantining workers. “Insufficient testing can snowball into staff and student absences,” reports Anya Kamenetz for NPR. “Aaron Neimark, who teaches kindergarten in San Francisco, missed the first few days back from winter break because he was waiting for the results of a PCR test after being exposed. He said a lot of his colleagues were out too. ‘It was about like eight or nine teachers [out] with only one substitute.’”

What’s needed is a “whatever it takes” approach to school staffing, including deploying district and central office staff to schools, boosting pay for substitute teachers, removing the red tape to getting more teachers certified and ending unnecessarily long quarantine periods by adopting the CDC’s five-day guideline.

Insist on parents’ right to know how federal funds are spent

“These funds from the American Rescue Plan and the extraordinary steps the Department is taking to get these resources to states quickly will allow schools to invest in mitigation strategies to get students back in the classroom and stay there,” Secretary of Education Miguel Cardona said last March.

Yet 10 months later, many parents are wondering how much of this money has actually been used on behalf of their children and what exactly it has been spent on. Answers to those questions are harder to get than you might think.

As we wrote back in September when we launched Believe in Better: You have a right to know “– line by line and dollar by dollar – exactly how much money is being spent on your child and how those dollars are put to use.” Yet, with little federal oversight or transparency built into the program, parents are left mostly in the dark.

Last September, the GeorgiaCAN team took on this challenge by reading through every plan that was submitted by the state’s 180 school districts, examining their spending priorities and compiling it into a spreadsheet for their parent advocates. The ConnCAN team followed their lead a month later with their own effort, resulting in a webpage that brings together every district plan alongside analysis of the spending proposals.

Now, an important new report from FutureEd–drawing on information gathered in partnership with Burbio–expands on this approach by providing analysis and insight into the plans of nearly 2,100 school districts serving about 40 percent of the nation’s public school students. Among the findings: “​​Remote instruction and technology remain key priorities despite the widespread return to in-person school. A third of the districts and charters in the Burbio sample intend to use American Rescue Plan funds on student mobile devices, spending an estimated $201 per student, and 605 plan to pay for ‘technology that supports learning and enables students to learn anywhere.’”

Yet, key barriers to fiscal transparency remain. The categories of spending from this kind of analysis can help identify national and regional trends, but can’t say how effective the specific programs will be. That requires a careful review of the specifics. At the same time, the information available covers what districts say they will do in the future, rather than the spending choices they have actually made. As FutureEd points out, districts are already changing spending in ways that differs from their plans.

One of the most important things we can do right now for children is make sure we are directing our public resources and public policies in ways that provide them with immediate support that is better than normal. That’s what the local leaders of the 50CAN network are aiming to do in state legislative sessions across the country:
Next week, we’ll be releasing the ambitious policy goals of our network for these sessions. 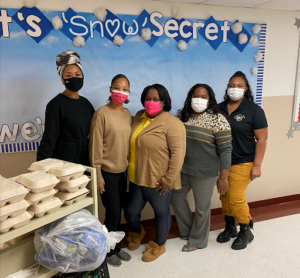 At a time when school staffing is creating challenges all over the country, many parents are stepping forward to help. At Cecil Elementary School in Baltimore last week, moms of Cecil graduates served as temps to support students and staff in the safe return to school.