It is week 72 of our new reality and in many areas of the country the first day of school is only a couple of weeks away.

This will be the third school year in this new reality. After the 2019-20 school year was abruptly cut short for many students and the 2020-21 school year often resulted in a disrupted and dimminshed experience, the question now is: how can we put the needs of students first through a belief in better?

That starts with upholding the idea that in this new school year every family should be able to choose from a variety of personalized, individualized choices of in-person schools, virtual schools, learning pods or homeschooling. As 50CAN President Derrell Bradford noted on Fordham’s Education Gadfly podcast last month, “I’m as against depriving a parent of an in-person option as I am of depriving a parent of a virtual one after giving it to them for a year.”

Yet, while this kind of education choice is crucial, it is not enough. We must go much further, building on the lessons learned this summer, to provide a whole range of free educational services and supports including: summer camp, high-quality tutoring, mentorship and mental health services from a caring adult.

Last time in The New Reality Roundup, we took stock of the early evidence of learning loss and spotlighted 50CAN’s National Voices fellows who are utilizing the media to call for an improved education system across the country.

This week, I speak with Josh Phillips, the CEO of Change Summer, an innovative new program that provides free, high-quality summer camp to students and is inspiring a movement to reimagine the experiences we can provide students when they are not in school.

Changing summer, one camp at a time

“We’re kidding ourselves–those of us who have been doing education reform for a long time–if we think that only academics is going to level the playing field,” Josh Phillips, the CEO of Change Summer tells me in our new video interview. “I think we’re sort of head-in-the-sand unless we just start to think through all of these things in a real holistic manner … unfortunately, the students that we serve don’t have opportunities to do a ton of really fantastic things during the summer.”

Change Summer is an innovative new nonprofit currently running summer camps in partnership with the Uncommon Schools and Achievement First charter networks, serving over 1,000 students this year. “Our campers and students have been cooped up for a long time… many students were out completely for the 2021 school year,” Phillips reflects, “You mentioned your own kids getting to go outside and spend time socializing and being curious and building independence–that’s exactly what we’re doing here. This is about kids from under-resourced communities being able to be themselves … and just have fun.”

Giving parents and students exceptional and creative summer programming is a core policy promise in 50CAN’s Believe in Better framework and with the vast amount of federal funding now available to districts, we have an opportunity to expand the reach of programs like Change Summer across the country.

With two-thirds of states’ American Rescue Plan relief dollars released and 39 state education agency plans submitted to the US Department of Education, researchers are starting to dig into how this influx of federal money is being spent. Helping make this kind of analysis possible is an initiative by FutureEd, which brings all the plans together in one place.

Yet, the effort to understand, dollar by dollar and cent by cent, whether this money is being spent in ways that will help kids is challenging in part because so much of the decisions will be made not through these state plans but at the local level. As FutureEd writes, state agencies “have discretion over only 10 percent of the total allocated funding with the remaining 90 percent going to schools districts or charter schools, i.e. local education agencies.”

That’s why advocacy victories like Transform Education Now’s recent win in Colorado, which requires districts to submit a detailed plan on how federal funding will be utilized, are so important. Ensuring this money is well spent starts with ensuring transparency on how it is being spent.

The team at DelawareCAN is celebrating a pair of advocacy victories this week. Governor Carney’s signing of House Bill 198 ensures Black history education will be taught in K-12 schools. The bill itself was a key goal of DelawareCAN’s Youth Advocacy Council. The team is also encouraged by the state Senate joining the House in passing a bill that, if signed by the Governor, will reduce the length of terms for school board members, giving the public increased accountability.

HawaiiKidsCAN’s David Miyashiro continued his summer push for districts across the Aloha State to create a permanent online option, securing a key endorsement of the idea from the state’s paper of record, the Honolulu Star Advertiser. Miyashiro also participated in a PBS debate, opposite the head of the state’s teacher union, state superintendent and a local principal on the future of public schools.

Transform Education Now, fresh off their victory in ensuring districts must submit a plan on how federal dollars will be used, are out with a new op-ed by co-Executive Director Nicholas Martinez, demanding that Denver Public Schools increase transparency. “The adopted budget doesn’t lay out clearly how stimulus funds will be spent,” Martinez writes for Westword. “The proposed budget presented for the board’s consideration in May indicated that most of the federal stimulus dollars will go to maintain the status quo.”

ConnCAN released their 2021 Field Guide to Education in Connecticut, an informative resource for families and policymakers that looks at the state of the education system and how children are performing within it. The guide places a particular focus on issues of equity.

The National Alliance for Public Charter Schools launched a call to action to protect charter schools from a provision in the federal budget proposal that, as CNN reports, could cut charter funding by $40 million.

Education Week’s Stephen Sawchuk analyzes the problem of missing and chronically absent students and provides recommendations to district leaders on how to bring them back to the classroom.

EdChoice released their new poll of teachers and educators, finding that most would prefer to be back in the classroom. A majority of teachers also support school choice.

The 74 Million presented research on child abuse over the past year, suggesting schools must be prepared to assist large numbers of students with trauma.

The Aspen Institute hosted the Moonshot Conference on the Future of Education, focusing on students’ ability to access a quality education and the advancement of youth mental health.

Stand Together is out with a new video, featuring Derek Johnson, calling for a revolution to the outdated American education system, including a new system for grading based on mastery. 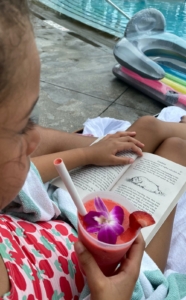 “I love reading on the beach or near a pool when I can, but since we live in NYC I mostly read in bed!” reports Ella, a second grader at Success Academy, seen here in her favorite reading spot with Charlotte’s Web. “It’s really nice that she helped him and he didn’t become bacon.” Making the most of summer comes in all different forms but one of the most memorable is also the simplest: getting lost in a great book. For parents eager to get their kids reading in the dog days of summer, Success has compiled a useful list of some of their students’ favorites.