“Public school enrollment dropped more sharply in school districts that remained remote longer compared to those that reopened for in-person learning sooner,” writes Lauren Camera for US News. “While enrollment in the country’s K-12 public schools has declined nationally–dropping roughly 3% during the 2020-21 school year, according to the National Center for Education Statistics–it’s rebounding in districts that reopened for in-person learning faster and continuing to decline in those that did not.”

At the same time, after more than two years of constant disruptions to their children’s education, a new NPR/Ipsos surveyfinds that parents rank education as a top issue, behind only inflation and crime, while expressing some optimism that things may finally be getting better. Yet, while parents’ overall perceptions of their child’s school are improving, the survey finds that 32% of parents believe “my child has fallen behind in school due to the pandemic” and 29% believe “my child dislikes school more now than before the Covid-19 pandemic.”

Who do these parents blame for their child falling behind? The survey finds a broad range of answers with 25% saying state education officials, 22% the local school board, 20% school administrators and 17% teachers.

Clearly there is a lot more work to be done.

Last time in the New Reality Roundup, we focused on the continuing student absenteeism crisis in our schools and the importance of educating parents on their options.

This week we look at a breakthrough win on education funding in the Volunteer State and exploring an exciting new educational model from Khan Academy that points the way forward to a more open and connected world.

“It’s time for TISA,” TennesseeCAN Executive Director Victor Evans triumphantly declared from the steps of the Capitol in Nashville, following successful votes in both the House and Senate on a funding reform bill he and his team first started working on six years ago.

One of the key lessons from our AdvocacyLabs report on The Science of Advocacy was “Persistence Is Power.” We wrote: “Advocacy demands a long-term commitment to your cause. Typically, advocates must invest years of work before their campaign shows results.” This year, that persistence paid off in the Volunteer State. 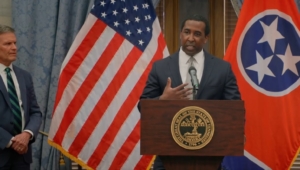 “At its core, TISA–The Tennessee Investment in Student Achievement–is about moving on from an outdated funding formula that was about adults, with schools funded based on the size of their teaching staff,” Victor shared.

“Now, education dollars will be distributed by a formula that is focused not only on the number of students in a given school but also on those students’ needs, with economically disadvantaged students, students with special needs, English Language Learners and students in rural communities and areas of concentrated poverty receiving higher per pupil funding to match their greater needs.” Schools receive an additional 25% of the per-pupil expenditure for each economically disadvantaged student in their care, for example, or up to 150% of the expenditure for students with special needs.

The new TISA law will pump more than $750 million of new spending into the system, including $32 million for charter facilities costs, which will now be permanently baked into the per-pupil funding charter schools receive. As consequential as that new money will be, equally important is the empowerment of individual schools and districts in deciding how that money will address the needs of their learners. True to our network’s commitment, the money also comes with transparency and accountability reporting requirements that give every parent line of sight into specifics of how schools and districts will spend the dollars.

The impressive policy win was powered by six years of work by Victor and his small but mighty team of advocates. Starting work on the legislation back in 2016, the TennesseeCAN team has worked with multiple administrations on shaping and advancing the legislation inch-by-inch until a policy window opened with a governor looking to make bold strides forward on education policy. “With Governor Lee’s focus on addressing the challenges of the pandemic through major investments and reforms, I had a feeling early on this might be our best shot.” As such, Victor committed early on to working side by side with Gov. Lee to make this moment count. He joined the Governor’s task force on funding reform as a subcommittee chair and put a spotlight on the urgency of the moment in multiple op-eds and media appearances, while fighting to ensure the final bill included equitable weights for the neediest students.

Behind the scenes, Victor and his team met with countless legislators to secure their support, including targeted legislative advocacy to bring co-sponsors onto the bill. The result: Tennessee is now leading the country forward to a student-centered future, making the Volunteer State the new benchmark for putting kids first that other states should emulate. As Tennessee Education Commissioner Penny Schwinn told the Tennessee Holler: “I feel really good for the kids of Tennessee.”

“It’s all about putting students at the center, having students invested in each other, having collaboration,” Sal Khan said as he announced the launch of the Khan World School, a full-time, online high school developed alongside Arizona State University. The program builds on the lessons Khan and his team have learned over more than a decade of delivering their series of popular online, mastery-based courses. The World School combines those prior efforts with a new program of real-time instruction and seminars to connect students to a community of learning.

The new initiative will start small with enrollment capped at just 200 students when the first school year begins on August 15, 2022. It will be free for students in Arizona, with tuition paid by the state, while US students in other states will have the opportunity to join at $9,900 a year and students outside of the United States at $12,900. It is an early example of one way education could evolve if we commit to Believing in Better and one we will be watching closely. The program:

As students and families look for a better way forward from the disruptions of the pandemic, the Khan World School is an early indicator of how dramatically we can rethink education to better work for all students.

With the Aloha state wrapping up their legislative session on Friday, HawaiiKidsCAN celebrates the passage of three of their priority bills, all focused on ensuring that students have a clear pathway to a career that matters: SB2826, which creates the first state-funded incentive program to reward schools that help students with career readiness; SB2824, which modifies Board of Education qualifications to include members of important industries in the state, an important step in solidifying emergent career readiness programs; and SB2141, which moves computer science courses from an elective in high school to a requirement for graduation.

At GeorgiaCAN, the team is also celebrating Governor Kemp’s signing of HB517 into law, which increases the tax credit scholarship available to Peach State families. The new law, whose progress we’ve followed in past issues of this newsletter, will provide scholarships to an additional 4,000 students so they can select the school of their choice.

DelawareCAN’s Britney Mumford penned an op-ed for Delaware Online urging a rejection of the charter school moratorium being considered by the legislature.

We also launched the fourth cohort of 50CAN’s National Voices Fellowship. Meet the ten impressive education leaderswho will be elevating their voices to a national audience.

Urban Institute tracks the amount of money being spent on students in poverty, rural vs. urban communities and race/ethnicity for each state, finding flatline trends over 20 years and students of color receiving 4% less funding nationally.

On May 3, Brookings hosts a conversation with Dr. Dana Suskind on how policymakers can support parents with family-centered policies that invest in students.

On May 4, Teach Plus hosts a webinar for Mental Health Awareness Month on how educators can prioritize students’ mental wellbeing.

CRPE’s Katherine Bateman offers a deep dive of the Arizona Autism Charter School, learning among many lessons that many students benefited from continuing in a virtual environment after school buildings reopened.

Brown University’s Emily Oster, alongside several other scholars, released a new study further analyzing the cost of school closures on student learning. A core finding: the more in-person learning that was lost, the larger the decline of student pass rates.

Urban Institute studied third graders in North Carolina, finding a 20% decrease in math proficiency between 2019 and 2021 and that the “learning lag in third-grade mathematics is equivalent to … a full year of learning.” 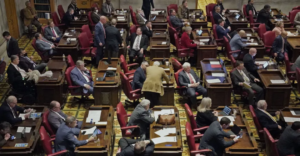 The Tennessee House of Representatives, in this image provided by Chalkbeat, meets on the floor shortly before passage of the Tennessee Investment in Student Achievement Act. Each legislator in the picture is an important relationship, nurtured through six years of work by TennesseeCAN. The bill now heads to the desk of Governor Lee, who calls the legislation “the most substantive reform to education funding in more than 30 years.”