It’s week 130 of our new reality and over the last few days the conversation in the education world has centered on the shocking results from the 2022 National Assessment of Educational Progress (NAEP), the longest-running nationally representative assessment of American students.

The results put an end to the debate about whether widespread learning loss during the pandemic is real: it is and it is just as bad as so many parents feared.

It sometimes felt over the past two and a half years that every time someone raised concerns about the risks of historic learning loss from our failure to prioritize the needs of students, the retort was: it’s way too early to say for sure.

Now that the definitive results from our best source on student achievement are in, a new retort has emerged: what good can come from looking backwards?

This kind of thinking has to be rejected outright. If we fail to face head-on the consequences of the choices we made, we will be doomed to repeat them over and over again in the recovery.

When schools first closed, it wasn’t too early to predict what would happen next. In fact, in March 2020 in this newsletter we cited rigorous research that showed a long-term interruption of in-person instruction would lead not only to lower test scores and grades but also lower graduation rates and college enrollment. This same research also showed that when students miss long stretches of schooling it leads to lower life-time earnings and higher levels of unemployment not only for these students in adulthood but–shockingly–also for their future children.

The data wasn’t missing. What was missing was a willingness to confront uncomfortable facts about the trade offs we were making when we chose to close schools and open bars and restaurants.

It also wasn’t too early to do something about it. In August 2020 we published two comprehensive blueprints for policymakers, Fund Everything and Measure Everything, drawn from the best ideas from across the education world. As Derrell Bradford and I wrote in our USA Today op-ed that same month: If we continued on the path we were on, “our nation’s already high levels of educational inequality will reach irreversible heights for a generation of students.”

We argued for an alternative: for all families to have the option of full-time, in-person learning, as well as learning pods, homeschooling and rigorous online options. We called for direct educational aid to families to supplement their child’s learning during the pandemic. And we outlined a new approach to ensuring we made decisions grounded in evidence, one which combined a continued investment in state assessments with new investments in online learning tools that could provide real-time feedback to teachers and families–no matter where the learning took place.

This approach was both inspired by the work of 50CAN’s network of local campaigns and served as a framework for collaboration in the next two legislative sessions grounded in five promises to America’s families, a commitment to Believe in Better. The result was more than 50 policy wins on everything from securing hundreds of millions of direct aid dollars to families for their education needs to reforming school funding models with a focus on vulnerable student populations to ensuring that parents had access to how the historic federal school stimulus was being spent.

The new NAEP results are a wake up call to a nation that has hit snooze on the student achievement alarm far too many times over the past two and a half years.

We need a sea-change in the support we provide to students. We need to commit to building school systems of the future with their needs at the center of everything we do. The challenge now is to use the latest data on learning loss to find the will to secure the wins that will bring these ambitious ideas to life.

Last time in the New Reality Roundup, we looked at shifting public attitudes towards K-12 education and put the spotlight on how more students can get access to the recovery programs they deserve. This week we focus on building renewed urgency to combat learning loss and welcome the newest Executive Director to the 50CAN family, JerseyCAN’s Paula White.

Don’t look away from NAEP

By now, you’ve likely heard the reverberations stemming from last week’s release of the long-term scores from the NAEP for 9 year olds. But this deserves to be more than just a one week story.

Here’s how The 74 Million’s Kevin Mahnken describes it:

“The picture it offers is bleak. In a special data collection combining scores from early 2020, just before schools began to close, with additional results from the winter of 2022, the report shows average long-term math performance falling for the first time ever; in reading, scores saw the biggest drop in 30 years,” Mahnken writes. “And in another familiar development, the declines were much larger for students at lower performance levels, widening already-huge learning disparities between the country’s high- and low-achievers.”

We know this because we’ve seen the alternatives. More than 90% of the nation’s Catholic schools reopened on time for in-person instruction in fall 2020, while two-thirds of district and charter schools kept their school doors locked. In Sweden, which kept schools open for the entirety of the pandemic, recent assessments have revealed no learning loss occurred for children of the Baltic nation. Our learning loss was a choice.

Director of the Arizona Center for Student Opportunity at the Arizona Charter School Association Matthew Ladner showed just how precipitous choices made during the pandemic were for Black children, a demographic group that NAEP acknowledged were both the lowest-performing and saw the most drastic drops.

Here’s 50CAN President Derrell Bradford’s take on this chart:  “For the last year, the country has been in the grip of a conversation about racism, race and their role in our schools. If you ever needed proof that the American education system ranks and treats students of color differently, the NAEP results are it. Nearly 30 years of progress for Black students has been erased by the decisions of education and elected officials to put their learning last on the list of priorities. We knew it would likely hurt Black students most to allow this disrupted learning and we did it anyways.”

“When we talk about the number one state in the country, the number two, we think of New Jersey,” the new executive director of JerseyCAN, Paula White, tells me in the latest entry of the New Reality Roundup video interview series. “We flip-flop with Massachusetts, we duke it out from time to time, but we always rank at the top. But the danger of a single story is the reality that when we disaggregate the data and we look at black and brown students, we have a very, very different picture emerging.”

A former elementary school teacher who later founded a charter school and went on to serve as the New Jersey Department of Education’s Chief Turnaround Officer, Paula has spent her career finding new ways to reach our most vulnerable students and help them achieve their full potential.

“This idea of the Matthew Effect, where the rich get richer and the poor get poorer, this has been brought into sharpest relief with the NAEP data,” Paula told me. “When you go to the students who are in the lowest percentiles–so not the 75th, but like the 25th percentile, now you’re looking at double digit drops. 13-point drops, 16-point drops. That’s where we are in America, and it’s not okay.”

Paula’s vision for what’s possible is at the heart of her work ahead in the Garden State, including an expansion of the New Jersey Tutoring Corps to get every student frequent, individualized support. She’s also set on making fundamental curriculum changes on how students are taught reading, following the success of phonics-based approaches in Mississippi and Tennessee. “We need great schools now more than ever,” Paula told me. “We have some great ones, and we need to make sure that they can grow and continue to serve more kids.”

JerseyCAN’s new Executive Director Paula White was featured on CBS News where she spoke about the growing learning gap for low-income students. The JerseyCAN team also announced that applications are open for the third cohort of their Teacher Leader Policy Fellowship. The program invites ten vision-oriented leaders to study the New Jersey education policy landscape and hone their advocacy skills. Applications are open from now until September 12.

GeorgiaCAN and their grassroots parent advocates led the way to making a major change in the screening process for dyslexia. Beginning in two years, every Georgia school will need to screen all K-3 students for dyslexia, along with a mandate to provide academic intervention and monthly monitoring. The team also reflected on the recent release of state test scores and some troubling results for parents in Savannah.

DelawareCAN’s Britney Mumford launched a new fiscal transparency tool. The tool is designed to keep families informed–dollar by dollar and cent by cent–on how the state and districts are spending ARP/ESSER funds.

Amanda Aragon of NewMexicoKidsCAN was featured in the Albuquerque Journal where she warned that the new collective bargaining agreement would hamstring the school board’s efforts to bring about needed change.

The Hawaii Department of Education released a new dashboard tool looking at the prevalence of computer science courses being taught in schools. The tool is a direct result of a law HawaiiKidsCAN passed last year, which requires every school to offer computer science courses. The dashboard data also includes demographic information on student participants and their teachers.

Urban Institute released an analysis of the Biden administration’s proposal to shift to an income-driven repayment plan for student loans, which would allow borrowers to repay their loans in proportion to their income.

The Center for American Progress studies the role of air quality–including the filtration and ventilation improvements that a number of districts are spending ARP funding on–and the connection to student health and learning outcomes.

PACE looks at four challenges confronting the implementation of strong computer science course offerings in high school, including qualified instructors and the need to make space in the curriculum.

Dan Goldhaber, writing for FutureEd, suggests that focusing retention and signing bonuses for teachers on areas of critical need, like special education, should be a key strategy to address teacher shortages.

The New Yorker looks at the rise of the science of reading and phonics-based approaches, along with the challenges at implementing a change in pedagogy in the nation’s largest school district.

The Washington Post surveyed college graduates to find what majors were regretted the most by alumni. Leading the pack in dissatisfaction: arts and humanities majors. Those with the least regrets? Engineering majors. 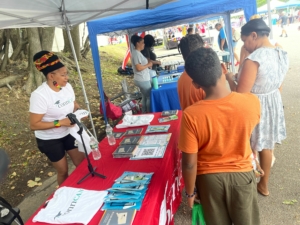 ConnCAN parent fellow Essence Divine meets with families in Waterbury, CT at a Bombazo, a community event honoring the ancestral dance of Tanio and Africans in Puerto Rico. The ConnCAN team spoke with parents to hear their concerns, handed out copies of their Field Guide to Education and answered questions related to educational options and opportunities in the Constitution State.