It’s week 128 of our new reality and recent state test results make clear the enormous learning losses students have experienced during the pandemic.

“For the second year in a row, Virginia public school students fared worse on the annual state accountability tests than in years before the coronavirus pandemic,” writes Jessica Nocera for the Richmond Times-Dispatch. “Across all grade levels, 66% of students overall passed the mathematics exam, compared with 82% who passed in 2018-19, the testing year prior to the pandemic. Science passing rates also plummeted statewide, from 81% in 2018-19 to 65% this year.”

Similarly, Chalkbeat’s Erica Meltzer and Melanie Asmarin report that in the newly released Colorado statewide test results only “40% of ninth graders met or exceeded expectations in math, compared with almost 50% in 2019.” In Denver Public Schools, the new results also revealed enormous achievement gaps: “72% of white students met expectations on state literacy tests, while 26% of Black students and 24% of Hispanic students did.”

Every new piece of information we get adds to a growing picture of a generation of students whose learning was significantly disrupted by school closures, interrupted instruction and our failures to meet their learning needs.

Last time in the New Reality Roundup, we explored what we all can learn from the educational innovations in Arizona and looked ahead to the 2022-23 school year with a focus on heading off potential disruptions to learning before they start.

This week, we look at shifting public attitudes towards K-12 education and take a look at whether students are getting access to the recovery programs they deserve.

Seize the opportunities created by renewed support for education reform

“A renewed support for most education reform measures,” blares a headline from EducationNext’s 2022 Survey of Public Opinion, one of the sector’s most important public opinion polls that is now in its sixteenth year. 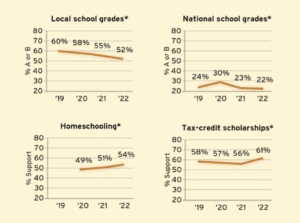 For decades, there’s been an enormous gap between the public’s perception of their own schools vs. the school system at large but this educational truism is no longer true. While public opinion on national school quality remains at extremely low levels, people’s satisfaction with their own local schools has consistently declined over the pandemic period.

The poll results from Education Next are further reinforcement of the idea that the pandemic has created a window of opportunity for bigger changes in the way our education system functions so that it works better for all kids.

Writing for the Brookings Institution, researchers Dan Silver, Anna Saavedra and Morgan Polikoff have a sobering takeon the state of pandemic learning recovery.

Drawing upon the results of a survey of nearly 1,500 parents, they find that participation in learning recovery opportunities is low, despite the $190 billion of federal stimulus dollars meant to dramatically expand these programs.

“We must provide learning recovery options that are feasible for parents and communicate their existence and importance to parents clearly,” the authors write. “Districts only have through 2024 to spend the biggest influx of federal education funds in history, and now is the time to ensure that children’s needs are met.”

Solving the information gap will require more candor than many districts have so far been able to muster. Parents have a right to know how their children are doing with communication from schools free of the feel-good language and grade inflation that obscures more than it enlightens. NewMexicoKidsCAN’s Executive Director Amanda Aragon shares one example of how this is playing out on the ground: “We haven’t tested for two years in New Mexico, meaning that parents haven’t received accurate information on their kids’ academic progress since 2019. That’s unacceptable – especially given that so many parents are being told through inflated grades that their children are doing well.”

The TennesseeCAN Action Fund won 13 of the 15 races they worked on for the primaries earlier this month, including victories over two incumbents who, for years, have stood in the way of families choosing the education that’s right for them.

JerseyCAN and new Executive Director Paula White kicked off their inaugural summer program for parents with the help of Senate Majority Leader Teresa Ruiz and Senate Education Chair Vin Gopel. Leader Ruiz told the parent advocates: “JerseyCAN is training the next generation of parent leaders, which can help further develop needed activism and information sharing on the local level. I applaud these parents’ advocacy on behalf of their children. Their commitment to our state’s future was inspiring, and I look forward to seeing these parent advocates in action in upcoming months and years.”

GeorgiaCAN continues in their years-long advocacy to support families with students with special needs by hosting a webinar this Thursday to help parents understand, analyze and self-advocate with IEPs.

Time Magazine is the latest outlet to deep dive into the science of reading revolution, with fascinating portraits of a reading crisis in Oakland, efforts in New York to move to a phonics-based model and the Mississippi Miracle.

Excel in Ed provides a state-by-state analysis of policies that support early literacy, including support for educators, clear information for parents and instruction.

A new report from Brookings finds that teacher diversity has a substantial impact on students who share the race of their instructors, with noticeable improvements in grades, attendance, self-management and even memory.

Doug Lemov, who we’ve interviewed previously in this newsletter, argues in Education Next that cellphones are impeding student achievement and should be banned from high schools.

According to Pew Research, Generation Z has dethroned Facebook as their primary social media app, with usage rates of TikTok and YouTube soaring. Black and Hispanic teens are more likely than white teens to say they are online “almost constantly.”

Urban Institute is out with a new report documenting their pilot project to connect HBCU undergrads with apprenticeships and internships as they pursue a degree. 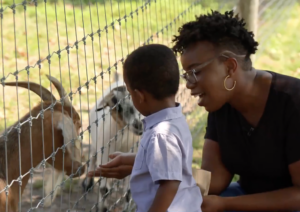 In this photo, New Jersey mom Brenaea Fairchilds helps a child interact with goats on a local outing for the homeschool collaborative she founded, The Melanin Village. Ms. Fairchilds and other homeschooling moms were featured on a recent Today Show segment that noted Black homeschooling rates have increased from 3% pre-pandemic to 16% now. Bernita Bradley, who works with homeschool collaborative Engaged Detroit, spoke for many parents drawn to homeschooling during the pandemic: “We don’t have time to see generation after generation fail. We don’t have time to keep waiting.”