We’ve now reached the seventh week of our new education reality. Nearly all states–43 of 50–have announced they will not reopen school buildings this school year.

At the same time, it is increasingly clear that we can’t afford to simply wait until we can return to normal. We will likely be grappling with the challenges created by Covid-19 for much of the next school year as well. As CDC Director Robert Redfield told the Washington Post: “There’s a possibility that the assault of the virus on our nation next winter will actually be even more difficult than the one we just went through.” Or put more colorfully by the New York Times’ science and health reporter Donald McNeil: communities may need to “dance” in and out of shutdowns for the next year or two before this crisis is truly over.

Last week we shined a spotlight on how we can prepare for an uncertain future and the importance of prioritizing the needs of students in how federal stimulus funding is put to use. This week we focus on how we can reimagine rather than cancel summer programs and the need to ensure every school is a resilient school that can adapt in what will certainly be a challenging summer and fall.

If you were sent The New Reality Roundup from a friend or colleague and would like to receive future issues every Monday, you can sign-up here.

“New York City’s pools, beaches and parks are typically filled with families trying to find respite on humid days, and subway cars are often crowded with students enrolled in free summer camps heading to air-conditioned museums,” writes Eliza Shapiro in The New York Times. “But with so many of the city’s usual summer activities called off or up in the air, there will be few such havens this July and August… Mayor Bill de Blasio recently announced that city pools will not open this summer… The usual roster of city-funded camps will not happen. The summer youth employment program, which typically enrolls about 75,000 low-income students each year, is canceled.”

While education thought leaders like Andrew Rotherham have argued that schools should stay open this summer to fill the gap, Shapiro reports that “Top officials at the United Federation of Teachers indicated that the powerful union would push back vigorously against any attempt to continue the school year online through the summer.”

All of these cancelations and prohibitions have created a huge vacuum that can only be filled by creative and resourceful leadership. While Shapiro describes the continued suffering for the city’s most vulnerable children during the summer months as “inevitable,” the failure to put in place a robust response to this summer vacuum is a choice.

With two months left to go before most school systems go on break, there is still time to reimagine summer for this new reality so that kids and families aren’t left to struggle through on their own. That means finding ways to make virtual schooling available as an option for every family that wants it rather than declaring summer school a non-starter, making structured outdoor activities safe for kids in an era of social distancing rather than canceling camp outright, offering opportunities for older students to secure meaningful work opportunities rather than ending programs for lack of imagination of what is possible, and building up an army of tutors to work one on one with students rather than resigning ourselves to huge gaps in learning when students return to school in the fall.

“Anyone who thinks we’re going to come back and have the same start we always have is fooling themselves,” says Stephen Pruitt, former education commissioner of Kentucky in an interview with USA Today’s Erin Richards. From Philadelphia to Cleveland to San Diego, and many school districts in between, officials are predicting that when schools do reopen this fall, they’re going to look very different than before this crisis hit.

A key goal for every state should be using the next few months to ensure that every school is resilient enough to handle what may be a challenging mix of problems in the new school year: waves of teacher and principals absences, students missing long stretches of in-person classes, and new shutdowns to respond to the reemergence of Covid-19.

One crucial opportunity to invest in resilience is through the billions of dollars in federal assistance on its way to the states. These funds can help complete the efforts underway to ensure every school age child has their own device for use in distance learning, that they can connect into lessons through free internet access, that schools have sufficient masks for everyone entering a school building, and that all teachers have been trained in effective distance learning instructional practices. Unfortunately, right now many states aren’t committing to use these funds on behalf of all of their schools. In North Carolina, for example, many charter schools have been left out of the planned distribution of federal aid. And as 50CAN’s own Derrell Bradford notes, many private schools could end up with no help in making this transition to safe and effective operations, leaving their students unprepared for the challenges to come.

“The coronavirus has brought much of the American economy to a halt,” writes Matt Barnum for Chalkbeat. “Another recession is possible, even likely. And the poorest school districts, which are particularly reliant on state funds, may once again bear the brunt of the budget crunch.”

It’s for this reason that the way federal stimulus funds are spent over the next few months will make such a big difference for kids. To ensure this funding is put to the best use, JerseyCAN launched a coalition to demand their federal representatives and senators address the financial shortfalls, while DelawareCAN put out specific recommendations about serving and protecting the immigrant community during and in the aftermath of Covid-19. The TennesseeCAN and CarolinaCAN teams released recommendations for the highest-impact ways for stimulus funds to be spent. Recognizing that awareness of how funding is spent is crucial, NewMexicoKidsCAN joined a coalition asking Secretary DeVos for new transparency requirements. Meanwhile, as states, like ConnCAN, are surveying parents to ground their advocacy in what families are experiencing, we’re seeing broad differences in the quality of instruction students are receiving. 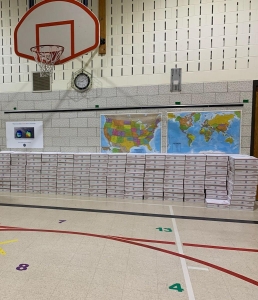 Each of these boxes, stacked in a school gymnasium in Baltimore, has a laptop ready to be sent to students in one of the most impoverished cities in America. There are 10,000 more boxes just like these. It’s a reminder that even as we enter Week 7, there are countless individuals across the country working long hours to bridge the technology divide so that students can learn no matter how long this crisis lasts.