One year ago, you received the first issue of The New Reality Roundup.

In our opening letter we wrote, “As the needs of our students shift dramatically this morning and for weeks and months to come, so too must our work as advocates shift to meet them. Make no mistake: In this new era, America’s students need advocates more than ever before … To support a new wave of collaboration, we are launching a weekly email focused on how we can better support students in this new era … Together, we can rise to this challenge, meet the new needs of education in America and reemerge even stronger than before.”

This has been a year of loss–in human life, in the connections to our friends and family, in the educational progress of our children. Yet, as we embark this morning on year two of our new reality, we see hope on the horizon. Every day more Americans receive the gift of an amazingly effective series of vaccines. Slowly, school buildings are reopening for families who need an in-person option for their children. Tens of billions of emergency federal K-12 education aid has already been sent to states with another $125 billion likely to be signed into law before the month is out.

After a year of emergency response, where we obtained 34 essential wins that connected kids to technology and meals, sent funds directly to parents to empower educational choices and expanded innovative learning programs from pods to summer camps, we are aiming for year two to be one of recovery. Our eyes are fixed on a brighter horizon with the recognition that we have a once-in-a-generation opportunity to rebuild American education on a more equitable, effective and empowering foundation than ever before.

Today in The New Reality Roundup, we take a look at the top tasks that await us for the second year of the Covid-19 crisis.

On Saturday, after a round-the-clock session, the Senate approved President Biden’s $1.9 trillion coronavirus relief plan on a 50-49 vote. If passed by the House of Representatives, as is widely anticipated, K-12 education will receive a $125 billion influx of federal funding. This new money adds to $67 billion of K-12 federal dollars provided by two earlier stimulus bills in 2020, resulting in an unprecedented $192 billion funding infusion into our schools or about $2,600 per K-12 student.

In a series of last minute changes, the Senate set aside $1.25 billion for summer enrichment, $1.25 billion for after-school programs and $3 billion for education technology but 87.5% of the money will go directly to school districts on a formula basis. This federal funding offers a once-in-a-generation opportunity to catch kids up who have fallen behind and to fundamentally change the way American education works so it delivers for all kids.

Yet, without forceful local advocacy on behalf of students and their families, the most likely outcome is that this money will be diverted away from these transformational goals. American Federation of Teachers President Randi Weingarten has seized the opportunity provided by these federal funds to push for a more expensive version of traditional schooling, sometimes saying her goal is “20% more space and 20% more staffing” while other times saying it is “47 percent more teachers and 47 percent more space.”

Not only would this staffing surge create a huge fiscal cliff for districts when the federal money ran out but it would also fail to address the deep inequities built into our existing education system and direct resources away from approaches that would be more effective and more transformative.

With poll after poll showing that parents want their children to return to a better education system, not just more of the same, it’s clear that there is a significant demand for state and local leaders to focus on bolder approaches to how we fund education, measure progress and provide individualized support to students.

Harness the new wave of grassroots energy for change

“A year into the pandemic, less than half of students nationwide are attending public schools that offer traditional, full-time schedules. Now many parents are beginning to rebel, frustrated with the pace of reopening and determined to take matters into their own hands,” Dana Goldstein observes in The New York Times. “Parents are filing lawsuits, agitating at public meetings, creating political action committees, or running for school board seats.”

What these parents advocate for next could go a long way towards determining whether we build a better education system during this period of recovery, or as Andrew Rotherham worries in The 74 Million, “we snap back and move on so fast that the actual challenges to a more equitable education system are swept aside in our collective relief.”

Yet, as Prof. Pamela Oliver notes in our AdvocacyLabs report on the science of advocacy, “When you trace it backwards in time you see that social movements build upon each other in waves … participation needs to be understood as a continuous process of making the opportunity to get involved visible to those around you and creating an expectation of action.”

With thousands of parents newly activated through the past year of challenges, the work now is to make the opportunities for the next stage of advocacy visible to all and create an expectation that the work must continue long after school buildings reopen their doors.

JerseyCAN received a major win last week when Governor Murphy announced a new initiative, “The Road Forward,” that addresses core issues of measurement and programs to mitigate learning loss. The JerseyCAN team played a key role, both in helping crafting the policies and building public support for the ideas. Executive Director Patricia Morgan expands on the wins in an op-ed for NJ Spotlight.

In the Peach State, the team at GeorgiaCAN was encouraged by important progress on one of their key legislative priorities when the Senate passed an expansion of the special needs scholarship program. If it becomes law, the legislation will provide educational options to children who have often been without necessary services during the pandemic. The bill now moves to the House of Representatives.

“Every day matters,” HawaiiKidsCAN’s David Miyashiro told KITV4 News, as he continues to advocate against the board of education’s plan to shorten the current school year by nine days. Worried about how the shortened calendar will compound the learning losses of the last year, HawaiiKidsCAN is launching their own spring break learning camp with volunteer educators from across the island.

The team at ConnCAN continues to fight for greater equity in how schools are funded in the Constitution State. “We think so many families in Connecticut don’t have the option of real estate choice and the only way to get their child to a high-performing school is by exercising school choice,” Executive Director Subira Gordon testified to the General Assembly’s education committee.

TennesseeCAN’s Victor Evans appeared on WREG Memphis where he made the case that annual assessments are more important this year than ever before. “Students have struggled with virtual learning and so it’ll be important for there to be assessments that show where kids are, be it in-person or virtual,” Evans said. 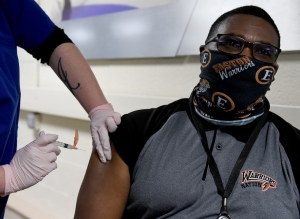 Dennis Kellum Sr., the head custodian at Easton High School, receives a dose of the Moderna coronavirus vaccine in Easton, Md., in late January. Teachers are now eligible for vaccines in 38 states across the country, although much more still needs to be done to overcome the trend of Black teachers and staff being vaccinated at lower rates than their peers.