“Students at high-poverty schools that stayed remote for more than half of the 2020-21 school year lost the equivalent of 22 weeks of instruction,” writes Sarah Mervosh in The New York Times, citing research by Harvard economist Thomas Kane. “Recovery is expected to take the longest for … low-income students and Black, Hispanic and Native American students. Research has found that extended remote learning was a primary driver of lost learning.”

It is a clear statement of a problem that was unfortunately largely missing from coverage when the decisions were made in the summer of 2020 to keep so many schools closed. What do we owe these students who were robbed of the learning they deserved? That’s the question we need to keep at the forefront of our public conversation and insist not just on answers, but actions.

Last time in the New Reality Roundup, we looked at polling from the National Alliance for Public Charter Schools and how to scale up our support for students to match the size of their learning losses.

This week we examine the political shifts underway around education and the need to push for a full recovery from school closures.

“As confidence in public schools wanes,” writes Keivn Mahnkren for the 74 Million, voters increasingly “see Democrats as out of touch.” Drawing from two new polls, one from Democrats for Education Reform and the other from the American Federation of Teachers, Mahnkren illuminates a dramatic decline in the Democratic Party’s traditional strength on educational issues: “Forty seven percent said they trusted Republicans to handle public education today, compared with just 43 percent who trusted Democrats. That pronounced flip … seems to be driven by a widely held view that Democrats aren’t concentrating on the education issues that most concern voters.”

This is the latest data point in a broader pattern that we’ve noted since week 86 of this newsletter, where we argued in the days following the election of Governor Glen Youngkin in Virginia that the needle was moved in the race by parents concerned over the welfare of their children after pandemic disruptions.

Having underestimated voter frustration over lengthy school closures, Democratic leaders are now at risk of missing the mark again with tepid responses to the enormous learning losses created by those closures. It wasn’t that long ago that Democratic presidents made bold education reforms a signature issue. Under Presidents Clinton and Obama, the country saw a dramatic expansion in charter schools, raised academic standards and insisted on school accountability for results. Under the Biden administration, we have seen a one-time cash infusion to schools with little oversight into how that money would be spent and an ill-advised crusade against the federal charter school program that resulted in no real help for families, just more red tape.

Chalkbeat’s Matt Barnum, took a look at the latest data from NWEA last week and highlighted some rays of light in the storm clouds: “In the last year, students in younger grades have recovered between 15% and 35% of the learning they had lost.” At the same time, Barnum noted, little to no progress was made in helping middle schoolers catch up.

So what’s working? Ms. Rosenberg laid out a series of steps that could be taken: high-impact tutoring, quality summer school, extending the school year for the next two years by six weeks, and doubling the amount of instruction in math and reading. Yet, the progress in these areas so far has been slow. With federal funds running out – nearly all will be spent by September of 2024 – if we stay on the current path it’s likely that tens of millions of students will never recover the learning lost from two years of disrupted schooling.

While we should keep pushing districts to implement bold solutions for learning recovery, we also need to look outside of these districts for new approaches from philanthropists, nonprofits and community groups to create an ecosystem of support around our students.

GeorgiaCAN launched a Back-to-School Toolkit for parents, offering resources, tips for relationship building with teachers and other school staff and more. They guide is freely available to all parents, but will also be utilized by GeorgiaCAN’s parent advocates in trainings and outreach.

HawaiiKidsCAN announced six legislators and two advocates as recipients of their “2022 Legislative Champion Awards.” Executive Director David Miyashiro celebrated each of them on the HawaiiKidsCAN Youtube channel in a series of interviews showcasing their legislative accomplishments over the past year.

CRPE is out with a pair of new reports. One looks at KaiPod learning, a company designed to sustain and improve learning pods. Another, at staff reductions and school closures happening in over 40% of America’s largest districts due to enrollment declines.

EdWeek announced an ongoing, serialized journalism project on the Science of Reading. The project will take readers through the opportunities and challenges of implementing the new approach to reading across the state of North Carolina.

Brookings released a study on educational opportunity in rural America, with the key finding that student achievement rates are substantially different across separate rural communities.

50CAN and FutureED released the latest in our AdvocacyLabs series. The new report focuses on lessons advocates can learn from the world of social simulations.

In The Grade, Alexander Russo surveyed members of the Education Writers Association on what they’d like to see moving forward, including a desire to hear more conservative voices and for the establishment of communities for education journalists of color.

Urban Institute studied the importance of mentorship in apprenticeship and CTE programs, from training to student retention.

John Bailey, a senior fellow at AEI, launched a new project, 22 for 22: A Marketplace of Ideas for State Leaders. The 22 suggestions range from competitive grants to public-private microschool partnerships. 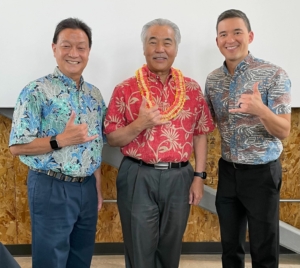 HawaiiKidsCAN Executive Director David Miyashiro celebrates with Hawaii Governor David Ige and Hui Broadband Strategy Officer Burt Lum after the signing of a package of digital equity bills that were a centerpiece of HawaiiKidsCAN’s 2022 legislative agenda. The bills are an important step forward toward our vision of a world of open and connected learning, expanding broadband access to all Hawaiians, establishing a flagship digital literacy program and appropriating seven million dollars for the construction of a digital learning center that will enable more students to supplement their learning with a suite of online courses.