It is week 86 of our new reality and tomorrow voters will be making their voices heard in thousands of school board races across the country.

One unexpected area where these typically local school decisions have overtaken all other issues is the governor’s race in Virginia, which has captured national attention as a potential political bellwether. The race — which pits Democrat Terry McAuliffe against Republican Glenn Youngkin — is one of the few in recent memory where local education policies will likely determine the outcome, with the Washington Post reporting Friday that the issue of education is now the number one concern of voters.

“Youngkin seems to have moved the needle in recent weeks by campaigning on issues related to schools,” according to the Washington Post. Youngkin’s message combines promises “to ban the teaching of critical race theory” with a big push to expand school choice. “Alexander Karrar, a 28-year-old building engineer who lives in Richmond, plans to vote for Youngkin in part because of … Youngkin’s plan to support charter schools. Karrar and his wife have a week-old daughter, Eleanor, and have always assumed they’d have to leave their city neighborhood for the suburbs once they had children in school. He thinks charter schools might give them another option.”

CNN explained further: “There are few areas as important and emotionally resonant to voters of all persuasions as the welfare and future of their kids. And senior Republicans believe that the pandemic — and the frustration felt by many parents over school closures for much of last year — means they can get a hearing from voters who might not always listen … So far, the focus on education seems to be helping Youngkin.”

Part of the reason McAuliffe has lost control of the education debate is Youngkin’s focus on hot-button issues and parents’ desire for more control, but the other reason is McAuliffe’s top education goal — raising teacher salaries — isn’t connecting with voters as an urgent issue in a time of crisis. By not speaking directly to parents’ immediate concerns like school closures and learning loss, McAuliffe left a lot of room for Youngkin to define the terms of the debate.

The outcome of this race tomorrow will likely have an outsized impact on how the two political parties approach the issue of education in the key elections to come in 2022.

Last time in the New Reality Roundup, we examined the precipitous, pre-pandemic drop of scores on the nation’s report card and looked at how JerseyCAN and other states are piloting new approaches to address teacher shortages in critical areas.

Today, we look at two concerning, lingering effects of the Covid-19 pandemic: sharp declines in student enrollment numbers and reports of rising violence in schools across the country.

“Enrollment in New York City’s public school system has dropped by about 50,000 students since the fall of 2019, the Department of Education said on Friday, the latest example of the profound disruption the pandemic has had on public education across the country,” Eliza Shapiro reported on Friday for The New York Times. “The 4.5 percent drop was likely driven by a number of factors, including parents choosing to home-school their children either temporarily or long-term, families leaving the city during the pandemic and some parents delaying the start of school for their young children altogether.”

The New York City numbers reflect a nationwide pattern, with The 74 reporting back in June that 1.5 million K-12 students had left the system during the 2019-2020 school year; the largest decrease since the turn of the century.

It isn’t only K-12 schools facing enrollment drops. Lauren S. Camera reports for US News & World Report that undergraduate college enrollment is on track for the largest two-year drop on record, including an 8% drop for less selective public colleges and universities.

The question we need to be asking: where are these students going? In many cases, parents who consistently voice that they’re ready for a school system that feels different are voting with their feet. Increased enrollment in charter schools, private schools and homeschooling is likely part of the new normal. But in a large number of cases we are likely seeing children simply fall off the radar with states failing their constitutional responsibility to provide an education.

“Much of the attention around the return to school after months of remote learning has focused on academic losses, but educators also feared emotional damage and behavioral unrest as students who have seen their lives upended by the pandemic adjust to being in school buildings again,” report Laura Meckler and Valerie Strauss for the Washington Post. “Those fears now appear to be materializing, in big ways and small.”

In New York City, Mayor Bill deBlasio stepped up security at schools, including additional metal detectors and a greater police presence. The city also banned Halloween costumes from the hit Netflix show Squid Game, after some students mimicked aspects of the violent show on the playground.

“Tempers are running high for many students as they return to school after a year and a half of loss, stress and disrupted learning,” school counselors told Gothamist. “Conflicts that simmered online are boiling over now that kids are back together in school. Students are also out of practice socially, struggling to relate to one another and misreading social cues.”

Now, the burden falls on educators, parents and community leaders to not only address and mitigate the learning loss incurred during the pandemic, but also the school culture and social skills that atrophied as many students spent more than a year outside of classrooms..

After a long and hard-fought campaign to ensure transparency in the Garden State, JerseyCAN was thankful the state administered over one million students diagnostic testing this fall. Executive Director Patricia Morgan told NJ Spotlight, “If we don’t go through a methodical process, we won’t know what has happened to these children.” The team also held a webinar for parents and educators on accelerating student learning in the wake of the pandemic with a panel of guests that included former Commissioner of Education Dr. Kimberly Harrington Markus.

“In testimony before the board on Thursday, David Miyashiro, executive director of the education nonprofit HawaiiKidsCAN, rightly said the Strive HI data should set off alarm bells,” wrote the editorial board for the Honolulu Star-Advertiser in an editorial demanding an urgent response to learning loss. HawaiiKidsCAN’s advocacy continues to be at the center of efforts by the state to ensure parents have a meaningful understanding of their children’s learning.

GeorgiaCAN, in collaboration with Latino Parents for Public Schools Atlanta, released an equity report, cited in an analysis by the 74 Million of the upcoming school board race and equity concerns throughout the district.

“Splitting the Bill: Understanding Education Finance Equity,” a new series of reports from Bellwether, examines how the funding of public schools remains inequitable and offers key questions for local advocates to ask in their communities.

CATO Institute is out with a new analysis that concludes private schools saw large gains in enrollment both throughout 2020 and 2021.

VELA Education Fund announced six grantees that received over $600,000 in funding this month including Black Mothers Forum, Free Forest School and Smart Girls HQ. Applications for their next round of microgrants are open until November 5.

The American Federation of Children released their 2021 School Choice Guidebook, which compiles longitudinal enrollment data and information on the advancement of private school choice policies.

The Kennedy School at Harvard held a panel on school choice in the post-pandemic era, featuring 50CAN President Derrell Bradford.

ProPublica investigates a question that we’ve been asking for some time at 50CAN: how is the $190 billion of federal relief funding being used? 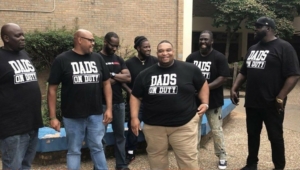 Following the arrest of over 20 students at Southwood High School in Shreveport, LA for fighting, a group of fathers created “Dads on Duty.” Working in shifts, the dads supervise hallways and the cafeteria to promote safety, calm and a culture of learning. The fighting came to an immediate halt. “We give high fives and share encouraging words,” father Michael La’Fitte told the Washington Post. “And we also crack dad jokes, of course.”