Summer is officially here and for most students across the country, school is out. That doesn’t mean, however, that education and the continued efforts to recover from the school shutdowns have any less relevance to parents and families seeking to get their children back on track.

Last time in the New Reality Roundup, we dove into two states–Mississippi and New York–to examine their use of Covid-19 relief funding over the past two years, with Mississippi posting historic gains in academics and New York City in the midst of a budget crisis as the federal funding runs out.

This week, we look at new polling from the National Alliance for Public Charter Schools and how to scale up our support for students to match the size of their learning losses.

We will be taking a break from the summer New Reality Roundup and the newsletter will return to your inboxes on Monday, July 25.

“I was blown away by the number of people who said they were willing to vote outside their political party for someone having the same position on education they do,” the National Alliance for Public Charter Schools’ Debbie Veney told The 74 Million on the release of their new survey, conducted by The Harris Poll. According to the poll, 82% of respondents would vote for someone of the opposing party if they shared beliefs on education policy.

In the fallout from the Covid-19 pandemic, education continues to be a major issue for Americans, ranking second behind the economy for voters in state and local elections and fourth for voters in federal elections. That’s a big shift from a Pew Poll released in the summer of 2016, where education was ranked eighth behind issues like social security, immigration and terrorism. It also confirms trends first spotted in 2021, where education rose to the top of the list of issues voters cared about, propelling Republican Governor Glenn Youngkin to office in a state that has trended blue since 2008.

“How did the pandemic disrupt learning for America’s more than 50 million K-12 students?” Cory Turner asks at NPR. “For two years, that question has felt immeasurable, like a phantom, though few educators doubted the shadow it cast over children who spent months struggling to learn online. Now, as a third pandemic school year draws to a close, new research offers the clearest accounting yet of the crisis’s academic toll—as well as reason to hope that schools can help.”

“Students at high-poverty schools experienced an academic double-whammy: Their schools were more likely to be remote and, when they were, students missed more learning …Teachers in remote, high-poverty schools were more likely to report that their students lacked a workspace and internet at home, and were less likely to have an adult there to help. Many older students disengaged because the pandemic forced them to become caretakers, or to get jobs,” Turner reports.

But there is hope. Turner shines a spotlight on the work of Penny Schwinn, Tennessee’s state education commissioner, who led the creation of the TN ALL Corps, “a sprawling, statewide network of tutors who, Schwinn hopes, can reach 150,000 elementary—and middle-schoolers over three years…If there is a silver lining for districts rushing to create new learning opportunities, it’s that many school leaders—and politicians—are realizing they make good sense long-term too.” It’s a program that TennesseeCAN has been fighting for since the beginning of the pandemic and one that will continue to be central to the team’s work in the years ahead.

HawaiiKidsCAN Executive Director David Miyashiro joined Hawaii Now to promote his student-led gubernatorial forum that aired on local television on June 16. The forum gave K-12 students from across the islands the opportunity to ask questions of candidates vying for the governor’s office.

50CAN National Voices Fellow Cooper Conway was featured on both the Young Voices policy podcast and Nashville’s Hub City Podcast, speaking about the merits of school choice. “I had four different options for high school–I decided to stay at my private school, because it worked better for me. I enjoyed the morals, I was growing in my faith at the time …I’m so thankful I had the choice.” Cooper told the host.

Brookings Institution looks at three questions for the near-term labor market, including whether the end of the school year and depleted savings will result in food insecurity for children.

The National Alliance for Public Charter Schools held their annual conference last week, announcing the first class of Rising Leaders, a group of 10 high school students who will develop leadership and advocacy skills.

Urban Institute examines how registered apprenticeships can be an ideal solution both for empowering students with skills needed in the technology industry and for companies looking to hire more diverse and talented employees.

Transcend synthesizes the data from 20,000 student survey participants in their Student Voice project, finding that most students say their experiences at school feel irrelevant, with few opportunities for agency. 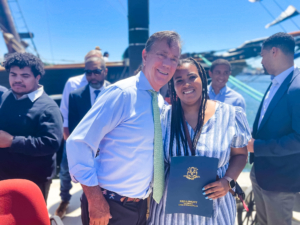 ConnCAN Executive Director Subira Gordon gathers with Governor Ned Lamont and members of the Black and Puerto Rican caucus for the signing of a bill that made Juneteenth a holiday in the Nutmeg State. The bill signing was conducted on a dock in New London, floating in front of a replica of the slave ship Amistad.