It is week 146 of our new reality, the first for this roundup in the new year.

In his New Years poem “In Memoriam,” Alfred Tennyson wrote:

Ring out a slowly dying cause,
And ancient forms of party strife;
Ring in the nobler modes of life,
With sweeter manners, purer laws.

No one watching C-SPAN over the past week would conclude that the US Congress is on track to live up to that lofty ambition, but in statehouses across our network we are seeing promising signs that 2023 can be a year where we ring out the destructive culture war clashes of the past year and ring in policies that bring us all together by providing students with whole new ways to get the educational opportunities they deserve.

This week we spotlight how parents are calling out for something new for their children and take stock of the predictions that our partners are making about what change is possible in 2023.

Deliver on parents’ desire for something different

One of the patterns of the past that is being left behind is the default approach to where kids go to school. The pandemic accelerated a trend that was already underway that will test the traditional public school system in ways it has never faced before.

“Nationwide, public-school enrollment fell by more than 1.4 million students to 49.4 million between fall 2019 and fall 2020 …The following school year, enrollment failed to return to pre-pandemic levels and remained roughly flat,” reported Ben Chapman and Andrea Fuller in the Wall Street Journal. “In those three years, enrollment fell in roughly 85 of the nation’s largest 100 public-school districts for which data was available, according to a Wall Street Journal analysis. New York, Los Angeles, Philadelphia and Fort Worth, Texas, all saw school-system enrollment drops of around 10%, the analysis found.”

Meanwhile, writing for the Fordham Institute, EdNavigator CEO Tim Daly argues that these enrollment declines are just the beginning: “Due to enrollment shifts and falling birth rates, many districts nationwide are experiencing a surge in empty seats … Just 60 percent of the available placements in Indianapolis are occupied. After shrinking by several hundred thousand students since 2000, Los Angeles expects to lose another 28 percent of its enrollment over the next eight years. Shifts in Boston have left the district with the equivalent of 16.5 unused school buildings … Chicago has 80,000 fewer students than it did in 2013. This school year, district data show over forty schools with fewer than 200 students.”

This new analysis landed last week around the same time yes. every kid. put out new polling showing Americans support Education Savings Accounts and other forms of direct-to-parent educational funding by a 4 to 1 margin, 54% to 13%, including three out of every five K-12 teachers polled. Also last week: Virginia Governor Glenn Youngkin proposed sweeping school choice legislation “that would allocate a portion of per-pupil state funding to a savings account for parents to spend on private school tuition or other approved education expenses.”

These dual trends of declining enrollment in the traditional system and growing momentum behind policies that provide educational funds directly to families could lead to a whole new wave of educational innovations that rivals the burst of activity in the 1990s around public charter schools, mayoral control and alternative certification programs like Teach For America. Whether that potential is fulfilled through bipartisan and enduring coalitions for change will be up to local advocates and innovators and the work they undertake this year.

To harness that energy, we need significant progress across three key areas of work:

Make 2023 the year to dream bigger

What will the education system look like ten years from now? Forbes’ Jabez LeBret collected the predictions of several education leaders on how they see the future of American education. One common theme: learning that breaks out of the four walls of a school.

Education Reimagined president Kelly Young sees a world of open and connected learning where students can collect credit from a variety of educational programs: “We will have programs credentialing learning no matter where it happens so that learner-centered after-school and summer programs can be part of a child’s formal education.”

America Succeeds president Tim Taylor is betting on the rise of career pathways: “The next decade will see a rapid expansion of education pathways to meet the needs of all learners. This will include more career and technical programs and skill certifications along with two-year degrees and four-year degrees.”

Meanwhile, the National Microschooling Center’s Don Soifer released his predictions for the new year. The first one? “The number of learners attending permissionless, alternative learning environments as their main source of schooling will continue to increase across the United States”

K-12 Dive predicts that districts will strengthen family engagement programs as a tool to combat growing parent dissatisfaction with the education system.

The team at Bellwether argues that school systems need to be bolder in response to the perfect storm of learning losses, declining enrollment and looming fiscal cliffs: “Expanding family and student access to learning experiences within or outside the school system can help alleviate the burden on schools to meet all needs of all students, while empowering families and students to get the support they need.”

While recognizing the challenges school systems face, Fordham Institute’s Checker Finn makes the case that there was a significant amount of progress we can now build upon in 2023: “We watched the swift invention of new forms of schooling, new choices, and the exercise of unprecedented engagement and interest by parents. We also saw political energies engaged that, while sometimes worrying, mostly feel like fresh breezes blowing through the stuffy corridors of districts and schools.”

One challenge these dreamers will likely face? The media. Education journalism watchdog Alexander Russo has his own predictions for 2023, including a frustrating but likely accurate one: “Education coverage will continue to focus on hot-button controversies like school culture wars and distracting novelties like artificial intelligence. Bad news will attract an inordinate amount of reporters’ time and attention. Most stories will be told from the point of view of the school system.”

NewMexicoKidsCAN Executive Director Amanda Aragon launched her new podcast, New Mexico Rising. The show features candid conversations with education leaders throughout the Land of Enchantment as they work to lift the state from the bottom of the rankings. The first episode features Yasine Armstrong on how one charter school in Roswell is providing a model for other schools across the state.

50CAN President Derrell Bradford was featured on a panel at FREOP’s Freedom and Progress Conference on repairing the damage done during the pandemic. “People are acting like we should move on. This wasn’t an earthquake that happened on land, with the shaking happening all at once,” Derrell offered. “It happened in the water. What we’re waiting for is the tidal wave of its impact to crash onto our daily lives.”

Transform Education Now in Colorado celebrated the State Board of Education overturning a local district decision to not approve a charter for University Prep, a school the team has fought to open. The state board lambasted the district for a closed decision making process in reversing the decision.

HawaiiKidsCAN Executive Director David Miyashiro offered Civil Beat his thoughts on how the Aloha State can use a $2 million surplus to improve education in 2023: “This is a real opportunity for bold action.”

50CAN CEO Marc Porter Magee joined Fordham’s Mike Petrilli for a look back at the most significant stories of 2022 on the Education Gadfly Podcast: “The more constructive leadership ultimately plays better with voters who want you to get elected and help solve their problems.”

In the 74 Million, John Bailey suggests that it wasn’t so much school closures, but rather lengthy quarantine procedures that kept kids out of classrooms that are most responsible for learning loss.

The 74 Million’s Kevin Mahnken analyzes the new omnibus spending bill that passed late last year and the $70 million increase for R&D on innovations with quick turnaround times in education.

Education Post sits down for a Q+A with literacy expert Laura Bollman to discuss the science of reading, implementation and teacher training.

Urban Institute looks at the connection between masters degrees, earnings and debt, finding “policymakers have done little to prevent institutions from offering high-cost programs and those that consistently leave students with high debts relative to their incomes.”

This Wednesday at 11:00am ET the Brookings Institution will host an online panel discussion exploring the future of charter schools featuring new KIPP CEO Shavar Jeffries and US Department of Education’s Roberto Rodríguez. 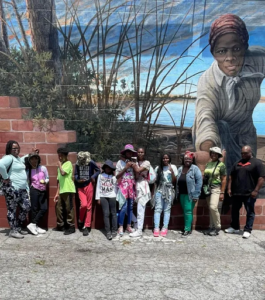 Students at Youth Empowered, a day-long microschool and one of the VELA Fund’s grantees, pose beneath a mural of Harriet Tubman. The program, now in its sixth year, uses the outdoors to build students’ understanding of both STEM and Black history, including a trip last summer that had students learn about the history of Black sailors from the Universal Sailing Club and hiking portions of the Underground Railroad. It’s yet another example of the incredible educational experiences that await our children in the education system of the future.

More posts from In the News