It’s week 148 of our new reality and we are focused on what it will take to create the future our kids deserve with a look at the investments we are making in new ideas and new organizations.

In her research on the characteristics of change agents, sociologist Pamela Oliver observed that the most successful leaders are “more optimistic about the prospect of change and about the efficacy of their participation” than most of the people around them. Over the past 12 years since we first launched 50CAN, we have strived to take this insight to heart.

When looking for local leaders to partner with, new organizations to support or new staff for our national team, we have focused on people who are truly committed to the mission of putting kids first and who believe they can make a difference for kids every day. Helping positive, constructive people bring needed change to their communities has always been our North Star and it will continue to guide our work in the years ahead.

Last week, 50CAN President Derrell Bradford announced our 46 policy goals that our network will advocate for in 2023. These locally led, nationally supported policy change campaigns are a central element of how 50CAN is working to bring the future of education to life. At the same time, over the past several years we have made three complementary bets to these local advocacy campaigns to help more visionary leaders accelerate the pace of change:

Last time in the New Reality Roundup, we examined the shifting tides in education and the need to deliver on parents’ desire for something different while also looking at our partners’ predictions for 2023.

Today, in this Special Edition, we take a closer look at 50CAN’s build and spark initiatives with a focus on the year ahead. 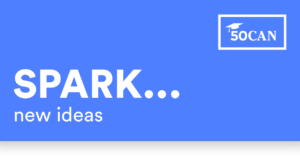 A decade after the publication of A Nation at Risk, in the middle of the 1990s, there was a palpable sense of optimism that change was coming to American education. A whole new generation of innovation was sparked through the discussion, debate and dissemination of new ways to respond to this crisis.
Over the past decade, as challenges, barriers and partisanship increased, some of this optimism in our nation’s ability to fundamentally reshape American education for the better has been lost. Optimism doesn’t mean ignoring all the problems our kids face or the challenges of finding real solutions to these problems, but instead having the belief that if we persist we can find a way to a brighter future.

At 50CAN, we choose to be the optimists by lifting up those who share our positive vision for the future and ensuring they take center stage. We believe our national and local fellowships can be a primary driver in ensuring that new ideas are sparked in communities across the country.

Over the past four years, that’s been the guiding factor behind the creation and expansion of 50CAN’s National Voices Fellowship, which helps to grow bipartisan cohorts of mid-career professionals into the media-savvy communicators who advance new ideas through opinion pages, radio and television appearances and conference panels.

When 50CAN President Derrell Bradford first had the idea for this fellowship, he thought there were education leaders out there with ideas that needed to be heard. What he didn’t anticipate was how many there were of them. Now we are getting ready to launch our fifth cohort, which will be our largest one yet. That’s out of necessity–there’s way too many good people, with strong ideas for the future, that need to be heard.

As a result, Derrell and VP of Communications Ned Stanley will be tripling the size of our national fellowship programs in 2023. National Voices will be joined by its first local iteration, New York Voices, which will charge the group with fundamentally reimagining the education ideas being considered by the families and educators of the nation’s largest school district. And in recognition of strong support and polling for a new education system by members of Generation Z, they’ll also launch a spin-off that elevates their voices.

With the majority of decision-making in education happening in state and local communities, we’re committing as a network to double down on our local parent and educator fellowships as well. National Outreach Manager Steven Quinn puts it best: “No one is closer to the problems and opportunities in education than parents. Most parents know the changes they want to see, and our local fellowships give them the tools and strategies to make them a reality.”

Have ideas you want to spark? Email spark@50can.org to discuss and learn more. 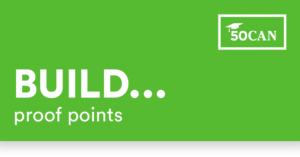 New ideas are important but they aren’t likely to lead to big changes without proof points that put those ideas into action for everyone to see. The other part of the optimism so many in our sector were experiencing in the 1990s was rooted in the fact that new, emerging proof points were all around us. Mission-driven educators were proving that heroes like Jaime Escalante weren’t outliers or unicorns, but trailblazers of a new, student-centered approach to teaching. The early success of high-performing charter schools like the KIPP network led others to conclude that they could replicate the model. Good ideas spread and hundreds of thousands of students have benefited as a result.

It’s time for the next generation of proof points and that means we need a new era of building. One thing we have learned in our work over the past decade of supporting new advocacy campaigns is that no one should have to start from scratch. That’s why we built up a national team of professionals who work side-by-side with our local leaders to help take the desk work off their plates so they can do what they do best. Over the past four years we have leveraged these national services by making them available to a new generation of leaders looking to create new organizations and bring ambitious new initiatives to life.

“The question that keeps me up at night, after I put my three little ones to bed,” reflects 50CAN Vice President of Finance and Operations Kenna Little, “Is how many more great organizations could get off the ground if they had a trusted partner from day one. No one should have to spend their first year buried in questions about payroll, staffing and operations, but for far too many dreamers that becomes the biggest barrier to building the future.”

In 2022, in addition to supporting our nine core advocacy campaigns, Kenna and her team provided the financial and operational platform for nine education organizations, ranging from one-woman shops to multimillion dollar initiatives.

CarolinaCAN Executive Director Marcus Brandon explains what makes this approach so powerful for a movement committed to change: “As a former state legislator and current advocate, you know what made both jobs easier? Proof points. It’s one thing to ask a legislator to imagine the possibilities, it’s another thing entirely to show them the good that’s happening and determine how we can expand it. The more examples of success we have, the better off we’ll be.”

Ready to make your own idea a reality and playing a role in ushering in the future of education? Email build@50can.org to discuss your dreams.

Amanda Aragon and her team at NewMexicoKidsCAN are celebrating their fifth anniversary this week. Join others to support the team by making a donation to power the next five years of advocacy in the Land of Enchantment.

ConnCAN’s English Learner Parents’ Bill of Rights has found a new home in HB6211, gaining support from key members of the House Education Committee, the Black and Puerto Rican caucus and a handful of new partner organizations. We’ll keep you posted as the bill–and others–develop.

After months of conversation and congressional testimony by HawaiiKidsCAN’s David Miyashiro, the Hawaii Board of Education announced that “learn everywhere” has been officially added as a core value in the board’s strategic plan, laying the groundwork for multiple pluralistic learning opportunities to be developed for students.

GeorgiaCAN’s annual Atlanta School Choice Expo garnered the attention of local papers throughout the state. The event brought together parents with a variety of school operators to showcase the variety of school types and opportunities available to families.

In the 74 Million, Shelby Doyle highlights a new poll of parents from the National School Choice Awareness Foundation, finding that 54% of parents are considering choosing new schools for their children.

FutureEd released a spreadsheet tracking policy and promises on education in governors’ State of the State addresses.

AEI examines the idea of Teacher Spending Accounts for both materials and professional development, in order to give educators increased autonomy in meeting student needs.

Education Week asks how writing instruction should complement the science of reading, finding that strengthening writing skills in the early grades is a critical component of literacy.

A new report from Urban Institute finds that, as a result of pandemic learning loss, average annual wages for current K-12 students will be 3.2% lower at age 30.

Today at 1:30pm ET, the Brookings Institution will host a forum on “Understanding and addressing gender, class, and racial disparities in college enrollment.” 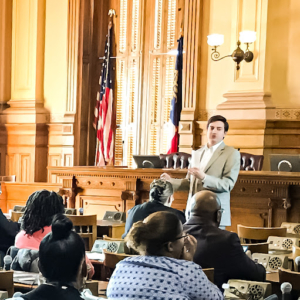 In this photograph, a younger Michael O’Sullivan at the Georgia State Capitol presents to some of the early members of the GeorgiaCAN parent coalition. Michael is celebrating his 10th anniversary as the leader of GeorgiaCAN this month and his work is an example of what we call in our AdvocacyLabs work “the power of persistence.” Year after year, Michael has pushed for big changes that expand options for kids and put more power and information in the hands of parents. “He’s taught me how to be a better advocate,” says ConnCAN Executive Director Subira Gordon. “Michael has a balance in being both passionate and objective at the same time. Using his ability to connect with people to his advantage, Michael is a powerhouse in the Georgia education advocacy and political world.”

More posts from In the News