With Kendrick Lamar’s “Humble” in the background, a camera winds its way into Busboys and Poets, a D.C. franchise that has become a popular gathering place for locals and visitors alike. Throughout a two minute video, there is a series of handoffs as adult after adult stands in front of a rapt group of young African-American men. 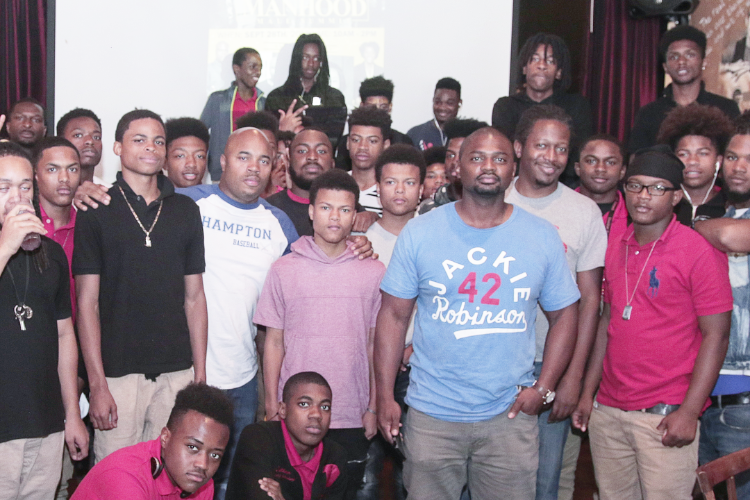 The lectures have all the feel of a small room TedTalk: vibrant presentations back-lit behind the speakers, coupled with a compelling voice and strategic advice, quips and clips that likely stuck out for the young men in the audience.

“Stay away from drama” reads a slide. Presenters remind the young group before them that social media accounts like Instagram and Facebook and how they’re used (or misused) can be “dangerous,” and warns of being responsible with a tool that can be more powerful than they realize. In YouCAN Advocate David Street’s course Passport to Manhood, the content focuses on advocacy, growth and opportunity, with smart-tech trappings serving as a sleight of hand. It’s not just about how to have a better, more responsible Instagram story; it’s about using these social mediums to tell stories with impact.

Impact is something personally important to David as well. Born to a Salvadorian father and an African-American mother, David is the proud product of a Washington D.C. upbringing. As a young man in the nation’s capital, he learned the value of education from his grandparents—particularly his grandfather—a man who only attained a fifth-grade education. His parents grounded the family in a strong feeling of faith and community, two things that have continued to play a huge part in David’s life to this day. All of these factors have made it possible for David to pursue a career that would involve bringing justice, advocacy and voice back to his own community.

He’s got a good sense of what the community needs. His formal education at a local D.C. charter school consisted of an hour and a half commute. Worse, when he got there, he was confronted with frustrating, deflating experiences. Against the backdrop of the everyday challenges of being young, black and male (where seven out of 10 students were expected to drop out of school), the teachers he had “weren’t ready for us; for the life of urban kids,” and they spent more time instructing the kids how to walk in bunches to the bus instead of building relationships. The relevance of having connections with youth grounded in authentic relationships is evident in David’s present work; his aforementioned video closes with David telling the young attendees “I love you.”

It’s clear that love, faith and community helped David make it through high school and his undergraduate years at North Carolina A&T, as well as what brought him back to the District. Passport to Manhood isn’t his only passion; by day he serves as the co-director at Bread for the World, a nonprofit focused on ending hunger in the United States. It’s an issue that hits close to home in some of the under-resourced, under-nourished sections of Washington D.C. where his program reaches, and a disparity that fuels his passion to make a difference. As a proponent of community schools and their potential to enrich neighborhoods with the resources they’re often deprived of, he sees healthy food and hunger tied to issues around access.

“One of the things that hurts me a lot,” David says in an animated voice, “is seeing kids that don’t have access to healthy eating options.” That’s where the link to Passport to Manhood comes in, a program that started in partnership with the local Boys and Girls Club. Seeing both the lack of being heard and the amount of energy being poured into social media, David saw an opportunity to leverage the grassroots organizing and campaigning skills he’s acquired over the years in his work to empower people in the community.

“Showing them the thing they use all the time to post their thoughts and videos on Twitter and Instagram can be used to also directly contact mayors and people in authority about being accountable for things in their community? That’s huge.” It’s also a lesson in brand identity, maturity and voice. The Passport program seeks to instill those soft skill lessons around the ability to engage local councilpersons and other officials on how to be responsible and responsive for anything from trash collection to school policies.

It also means making sure that as they “recognize that small devices can change lives,” that the young men and women learn the importance of telling their story in a way that’s both respectful and compelling when sharing it with wider audiences that might include government or school officials. Since starting, these programs have grown in size, influence and interest. Passport to Manhood is currently working with nearly 40 young men and Smart Girls (the sister program for females) is at nearly 20, but word of the program model has spread. Recently the team presented to 35 young men at Harlem Children’s Zone. At a conference back home in D.C., a group from Paris was also enticed by the model. Because of that, this upcoming summer David and some youth will travel to France to talk about how to use the skills around social media advocacy, storytelling, conflict resolution and community to build capacity around immigrant communities in Paris.

Meanwhile, there’s an even broader umbrella happening back home. David has formed a partnership with University of the District of Columbia to develop and run workshops on workforce development skills like leadership and conflict resolution. He has also laid the foundation to bring the Passport model to Latino families in the D.C. area.

The reality for many people living in urban cities is that life becomes a bizarre game of “choose your own adventure” at times. In some sections of a city, families may feel constrained to focus their energy more on how to get their children safely to school instead of harassing the city about trash collection. It might mean learning to navigate a pothole at an intersection to instead bring attention to issues of stagnant snow removal. With a growing mission, Passport is becoming something more than just a way to teach skills; it’s a meaningful vehicle to help vulnerable populations around the city make demands and tell stories using the egalitarian platforms of social media.

For David, it all comes down to essential questions and beliefs: “How do you bring people together across backgrounds, faith, identities and communities and help them have an impact?” Passport is the beginning of the answer to that question.

Tre Johnson is a writer, educator, advocate and part-time superhero. If you’ve been working in education or activism and would like to share your story, contact him at tre.johns@gmail.com