It is week 66 of our new reality and with legislative sessions in many states coming to a close, we’re putting the spotlight on the work of educational entrepreneurs to make our schools more culturally affirming and on state policy victories that move us closer to equitable school funding systems.

Last time in the New Reality Roundup, we looked at the need to provide a virtual option next year for any family who wants one and reported on CarolinaCAN’s efforts to pass legislation that would give parents up to $3,000 for summer camp and other educational and mental health services.

This week, we’re joined by former DC Chancellor Kaya Henderson, whose new venture is called Reconstruction. Co-founded with economist Roland Fryer, it offers a whole new set of virtual tutoring and courses grounded in and focused on the history and experiences of African Americans. We also spotlight a pair of wins by Transform Education Now in Colorado that expand tutoring and ensure a parent’s right to know how dollars are being spent.

“Reconstruction is a culmination of all of my frustrations in education over almost 30 years,” Kaya Henderson, the former chancellor of DC Public Schools, tells Derrell Bradford in our new video interview. “The goal is to provide an unapologetically Black education to students and families. To teach our young people our own true history–our history of love and joy and resilience and success and intellectualism.”

The Reconstruction platform takes advantage of the expansion of free devices and internet to provide small groups of students, families and even adults with online options that are both academically rigorous and culturally affirming. In each course, which cost $10 per session, students are matched with a tutor and small group of six to ten classmates for a unique, interactive experience. For example, in the course “Black Shakespeare,” developed in partnership with the Folger Shakespeare Library, students analyze Shakespeare’s plays through the lens of the Black experience, and then participate in a virtual table reading of Macbeth, Othello and The Merchant of Venice.

“I wanted to create a space where students would feel a sense of belonging and feel like people were rooting for them and preparing for success.”

Back in March, we made the case at 50CAN’s Federal Funding Forum for prioritizing transparency in all the federal education dollars flowing to states. Our argument was simple: parents have the absolute right to know if those dollars are being spent wisely and in ways that will meaningfully help their children recover academically from the pandemic.

We’re encouraged by a recent win from Transform Education Now in Colorado that ensures that families will be able to keep tabs on district spending of these federal funds, dollar by dollar. HB1259, passed last week, requires districts to submit a detailed plan to the Colorado Department of Education on how they will spend this money to address Covid-19 related learning loss. “These plans will be freely available to the public,” TEN’s Co-Executive Directors Ariel Smith and Nicholas Martinez write. “Our recent poll found that the average Colorado family spent more than $1,500 on educational expenses during the pandemic. They now have a right to know how districts will be spending the federal windfall.”

Several weeks ago in the New Reality Roundup, we noted that through ConnCAN’s leadership–and over 130 legislative meetings–the Constitution State was on the cusp of the biggest school funding reform in 20 years. We are thrilled to share that the suite of reforms championed by ConnCAN were passed last week in the final days of session. The new budget sends more than $130 million to Connecticut’s highest-need school districts, provides charter schools with the largest per-pupil funding increase in two decades and creates new weights for English Language Learners and concentrated poverty for a more equitable funding formula. “These changes add up to a generational investment in education,” writes Executive Director Subira Gordon.

Transform Education Now’s win on transparency wasn’t the only policy victory that emerged from their legislative session. After determining the average Colorado student only received 15 hours of weekly instruction during the pandemic, the team knew tutoring would be essential to catch kids back up. Partnering with several Representatives and Senators, as well as coaltion partners DFER-Colorado, the team at TEN passed HB-1234 last week. The bill allocates $5 million to support districts in creating or expanding access to high-impact tutoring programs.

HawaiiKidsCAN’s David Miyashiro went on a Believe In Better media barnstorm, making the case for both for giving more kids access to great summer programming and for the need to give parents across the Aloha State a virtual option for next year.

On Tuesday, June 15, GeorgiaCAN will host a webinar with the Metro Atlanta Chamber of Commerce on the importance of assessment and educational data and the role it plays in ensuring an educated workforce. The team also graduated 48 new parent advocates from their EPIC training program.

Excel In Ed looks at the importance of family engagement and suggests that policymakers should make parent partnerships a higher priority.

The Reinventing America’s School Project and The 74 Million will host a webinar on Wednesday, June 16 taking stock of the last thirty years of charter schools and their legacy on school reinvention. The event will feature a video message from Bill Clinton.

The US Department of Education released a new report, Education in a Pandemic: The Disparate Impact of Covid-19 on America’s Students. Among the findings: students are further behind in math and far further behind in reading than before the pandemic.

yes. every kid. notes that many Fortune 500 companies have begun to look for certifications in hiring decisions, making it all the more important for high schools to offer certification programs that will match students with high-skill, high-wage careers.

A for Arizona launched the Expansion and Innovation Fund to provide microgrants to visionary teachers and principals looking to redesign their schools. Applications are open now. 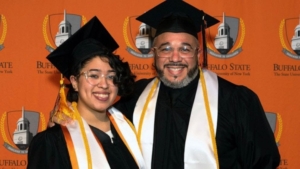 Good Morning America shares the story of Clarimar Galarza and her father Cesar who both graduated from Buffalo State College in May. “In 2008, Galarza and his family moved from Puerto Rico to New York,” GMA shares. “Nine years later, he decided to go back to school and continue his education.”

Despite English being a second language for both father and daughter, the pair excelled by studying together over lunch and persisting through virtual education when the pandemic hit.