It is week 40 of our new education reality and as 2020 comes to a close, we wanted to use this last roundup of the year to look back with gratitude on all the ways that education leaders, journalists and advocates stepped forward to illuminate the needs of kids and the concrete steps we can and should take to meet them.

When we launched the New Reality Roundup back in March, we hoped that a newsletter collecting all these resources in one place might make it a little easier to put the needs of kids first in our response to this crisis. We are as inspired today as we were in those initial weeks of all the ways–big and small–that Americans have risen to the challenge.

Last week, we welcomed back Doug Lemov for a video interview on strengthening virtual learning and also looked at districts that are leading the way forward in ensuring that the most at-need students could return to school buildings first.

This week, in our final Roundup of 2020, we bring together a list of articles, interviews and resources that made a difference as we navigated this unprecedented time together.

From all of us at 50CAN, we wish you safe and happy holidays. The New Reality Roundup will be back on January 11th, 2021.

When the American education system confronted a challenge unlike any it had seen before, educators and advocacy leaders across the country stepped up to meet the moment. Parent groups organized to ensure that the voices and experiences of families were being heard by public officials. Educators and innovators built new online curricula and shared best practices to strengthen virtual learning. District leaders, grappling with immense financial and logistical challenges, found new ways to connect with students. And policy advocates helped ensure that new resources made their way directly to students and their families.

Over the past 40 weeks, we featured the work of countless educators and advocates making a difference in 2020. Here are some of favorites:

Express gratefulness for the education journalists who kept us informed

Back in March, we issued a call for districts to find the missing kids, spurred by exceptional reporting from Howard Blume and Sonali Kohli of the Los Angeles Times. Within days, that reporting was coupled with other pieces from the New York Times and Huffington Post that sparked immediate actions by districts across the country. It was an early indicator of the deeply important role that education journalists would play in informing the public about the state of an education system in crisis. They did so, often without the ability to meet sources in person, and shaped our understanding of both the pandemic and how our schools were responding.

Here are some of the stories we found the most illuminating in 2020:

Given the ever-shifting challenges presented by the pandemic, 2020 marked the first year where we revised our campaign goals in the spring and coupled them with an additional set of fall campaign goals to meet the needs of parents across the country. As the year draws to a close, we’re buoyed by our network achieving 34 policy victories, the largest number of wins in our 10-year history.

Some of the highlights from work of our local teams:

Over the course of 2020, we shared hundreds of resources for advocates, educators, district leaders and policymakers to consider. Here are 15 of the most widely-shared: 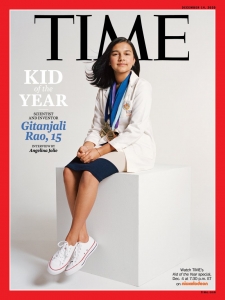 “I was like 10 when I told my parents that I wanted to research carbon nanotube sensor technology at the Denver Water quality research lab, and my mom was like, ‘A what?’,” explains 15-year old scientist Gitanjali Rao, who was just named TIME Magazine’s first-ever Kid of the Year. “It was just that changing factor of, you know this work is going to be in our generation’s hands pretty soon. So if no one else is gonna do it, I’m gonna do it.”