It is week 80 of our new reality. While some districts across the country have released detailed spending plans and budgets to the public, in most school districts we have no idea whether the tens of billions of dollars in emergency federal funds are being well spent.

That needs to change.

Securing transparency won’t be easy. That’s why across the 50CAN network, we are undertaking a coordinated advocacy campaign to ensure a parent’s right to know how districts will spend federal funds–line by line and dollar by dollar.

Last time in the New Reality Roundup, we made the case for a quality virtual option to keep learning happening despite quarantines, and spoke to Doug Lemov and Steven Farr on the importance of keeping great instruction going no matter what disruptions we face this school year.

Today, we outline a plan of action on district transparency and accountability to parents with a spotlight on the work already underway in Georgia.

Learn from Georgia’s push for transparency

“Every district in Georgia submitted a plan to the state with their intentions on how they would use federal funding.” GeorgiaCAN Outreach Director Steven Quinn shared with us last week. “The big thing we found, as we were talking to parents, was that those plans hadn’t been shared with them. Some districts reached out to parents to ask about their priorities for spending the funding but then they never followed up. In some districts, public comment was only asked for after the plans were submitted to the state.”

Over the past month, Steven read through every plan that was submitted by Georgia’s 180 school districts, examining their spending priorities and compiling it into a spreadsheet to give his parent advocates both information on the spending of their own district alongside the ability to compare with others across the state. “I wanted parents to have the ability to ask questions,” Steven said, “and that was only going to happen if they were informed.”

“There’s some positives here and some negatives,” Steven admits. “A lot of the districts in Georgia went in head-first on summer learning programs as well as high-frequency, targeted tutoring. But when you pull back the layers, you also see that districts are spending the bare minimum–just enough to meet the federal requirements–in order to address learning loss.”

The effort has given the GeorgiaCAN team a new perspective on the challenge of making sure this money is well spent. “It’s made me more concerned about transparency–we haven’t seen great examples of transparency of spending programs and that needs to change,” Steven shared when asked about the national implications. “As one of the earliest states to have these plans public, it raises questions for me about what the districts in other states’ plans look like.”

A framework for transparency

Back in March, we put a spotlight on the $190 billion flowing from the federal government to states and districts with a policy memo we released to the public and a virtual forum that examined the role advocates needed to play to make sure the money was well spent.

How those funds are spent is critical and parents have been consistent in their own opinion: Ongoing monthly polling by the National Parents Union, as well as corroborating polls by Beacon Research for the Walton Family Foundation have consistently found, month after month, that a majority of American parents want the nation to rethink how students are educated. Yet after spending the last decade engaged in education advocacy, we’ve seen countless instances of the education bureaucracy choosing to spend resources reinforcing a system that isn’t working for millions of children instead of fundamentally rethinking and envisioning a better one.

We followed these by putting out our own policy framework for how to direct these resources to their best use called Believe in Better. Grounded in the work of local campaigns and their parent volunteers, the framework is built around five promises to America’s children:

As TennesseCAN Executive Director Victor Evans writes in a new op-ed that ran in papers across the state last week, “It is quite possible our schools may never see this level of federal relief funding again. This is not the time to spend once in a lifetime money on buildings, deferred maintenance and a district’s wishlist.”

A win earlier this summer from Transform Education Now in Colorado provides a clear legislative path forward to ensure this opportunity isn’t wasted. In passing House Bill 21-1295, the team at TEN ensured that all district spending plans must be submitted to the state and made available for the public to scrutinize and debate.

Across the 50CAN network, our local teams are gearing up to uphold a parents’ right to know how all this public money is being spent. Over the coming months, you’ll see:

With funds already being spent, we have a responsibility to act urgently to bring information to parents. 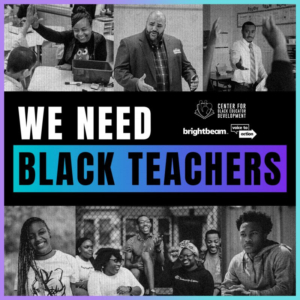 In early September, the Center for Black Educator Development started a new campaign–#WeNeedBlackTeachers–to bring attention to the need to diversify America’s educator pipeline. We support those efforts at 50CAN and also celebrate the leadership of 50CAN alumna Mimi Woldeyohannes, who played a critical role in making this campaign a reality. For more, see Mimi in a video conversation with CitizenEd here.