Those words rode the bus with Quibila Divine in the late 1960s and early 70s from North Philadelphia to the predominantly white northeast neighborhood where she would be among a cohort of African-American kids integrating at Solis Cohen, the local elementary school.

The commute to the school, a product of the desegregation mandate issued by Pennsylvania as a result of Brown vs. Board of Education, took Quibila three separate bus rides. This left plenty of time to reflect on her mother’s four word directive, given in the living room of their house, a common gathering place for many of the kids in the neighborhood. Taking those words to heart, Quibila enrolled in the northeast schools and thrived despite the almost daily racial animus. From day one she recalls being treated poorly—even being called “nigger” by her classmates—and yet still maintained her status as an honor roll student.

Over time Quibila joined the track team, racing every day alongside students that reviled her. Against the backdrop of all of this was the obvious racial climate that had riven the country in half: daily protests, speeches from leaders of the civil rights movement, even the music had contributed to a fragile, volatile climate that implicated the city of Philadelphia. As Quibila and her cohort endured the everyday racial trials that ranged from epithets to violence, the city boiled over occasionally, most notably with a 1964 race riot in North Philadelphia that left nearly 350 citizens and police officers injured, caused $25 million in damages and claimed one life. Eventually, the commute was too much—too violent, too far, too bigoted—so Quibila returned to the schools in her own neighborhood. There she finished school and enrolled as a marketing major at Drexel University, a well-known Philadelphia university that still managed to feel worlds away from her block.

Just two years later Quibila’s younger sister, Sylvia Simms, had an entirely different experience with the northeast schools. If the older sister’s schooling was defined by being on the defensive, Sylvia’s was much more about being on the offensive. Instead of shirking and circumventing the racial animus encountered in the northeast, Sylvia’s cohort of classmates leaned into the times, emboldened by the same things that made her older sister more reticent. With an admitted chip on her shoulder (“I always felt like I was the underdog in the family, kind of in Quibila’s shadow a bit,” Sylvia shared), Sylvia and her friends relished the black militancy and vigilance that emerged as the movement gained steam. At times this proved reckless for her, as her approach to schooling, socializing and rules had her out on the street at hours and with people that weren’t productive. Never quite getting into the kind of trouble that could’ve landed her in court or worse, Sylvia still slid into a different path than her college-going sister. At 17 she had dropped out of school and was having a child.

During this time, Quibila returned home regularly, checking on family and friends. In a familiar way for many people, she was saddened and frustrated by what these visits produced—a mixture of frustration and alienation. College allowed her to be frustrated by how much she saw her community mired in conditions and situations that seemed like perpetual dead ends, and the combination of epiphany and education often left her feeling dedicated but also a bit removed. It was a challenge she was determined to close, particularly after coming home and talking to local kids who were showing her report cards with C’s and D’s. Those conversations led the sisters to start holding tutoring sessions for local kids in the basement of Sylvia’s house. Older kids were recruited to tutor younger kids, with the sisters managing a small but hearty mini-organization that would eventually turn into what they are running together now: PARENT POWER. 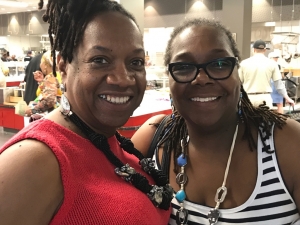 Getting PARENT POWER up and running hasn’t been an easy road. Along the way both women continued to meet and separate from time to time. Quibila’s career took a second life, where she spent a few years in Harrisburg working with the state’s Human Relations Commission; ironically the same group that was pushing for the desegregation initiatives that her and her sister lived through. It was during that time that Quibila saw the intersection of education and community services issues, and the inability—at the highest levels—to empower and inform citizens to influence systems to provide what they needed. Simultaneously, Sylvia was in the midst of long career as a bus attendant back in Philadelphia, a role she’d ultimately hold for almost 20 years. That career exposed her to what she saw as school closings and student reassignments grew—an inconsistency in quality student services for special needs students. These situations awakened the ever-present underdog in her, and over time she became vocal about advocating for the kids she knew, angering her administration to the point that she was removed from the school.

In 2005, Quibila returned to Philadelphia to attend to their ill mother who would eventually pass. She joined her sister as an employee at the School District of Philadelphia, seeking to make more of an education investment and connection after her Human Relations Commission days in Harrisburg and a role at the Pennsylvania Department of Education. As the director in the Office of Parent and Family Engagement, Quibila applied those Harrisburg and Department lessons to her work, starting a series of parent- and community-centered empowerment initiatives. Her work at the Department was used as a model for the district’s School Advisory Councils, combined community members, parents and school staff together to provide input on school operations and practices. She also piloted a series of parent workshops via Parent University, which focused on equipping district parents with tools around understanding lesson plans, curriculum, addressing issues in schools and preparing kids for college and career paths. But Parent University also meant addressing the parents’ needs as well, providing classes around computer training and refreshing math and literacy skills.

Meanwhile, it was a trying, political time for the School District of Philadelphia. Superintendent Dr. Arlene Ackerman’s leadership and approach was focused largely on race and equity, often challenging the comforts of the city. The district had confronted issues on school selection and quality access for years, and it’s likely that the dynamics around those themes are what spurred the sisters to do the work they’ve come to be known for: empowerment and community engagement. As Sylvia was eventually removed from the district, she spent more and more time doing the work of PARENT POWER, gradually cultivating a base of black and brown parents who were not only being educated about education and policy, but also about how to advocate for resources for their schools. From computer training to restocking libraries to informing parents about their rights around engaging with schools, Quibila and Sylvia learned to move about the city in ways that has at times raised both ire and respect. This amassing of power and community support drew the attention of the city, enough to get Sylvia appointed as a School Reform Commissioner on the district’s hybrid state- and city-appointed school board in 2013.

The sisters have continued to persist with community work, advocating around quality, access and empowerment in ways that seem to have an echo back to their childhood Philly days. This sort of ambition, alliance and advocacy persistence hasn’t come without consequences; their work and their unique presence in the Philadelphia education landscape has often been met with controversy, forcing these two sisters to navigate an already notoriously political terrain with a nimbleness that most wouldn’t care to attempt. During her tenure as a school board commissioner, Sylvia found herself in the line of fire on several occasions.

One time she was recorded scolding a group of activist students at a public screening of the Hollywood film Won’t Back Down, telling the group from the local Philadelphia Student Union that they were “probably in failing schools” in answer to their chant of “Save our schools!” The optics of the incident were jarring: here was the well-known former community organizer, now a member of a wildly unpopular school board presiding over a struggling, charter-heavy, school-closing district, shouting down a group of black kids, many of whom likely hailed from the same types of neighborhoods Sylvia grew up in.

Not long after there was an even bigger incident, where, in the middle of a school reform commission meeting, Sylvia reversed Superintendent Hite’s decision not to convert a neighborhood school, Wister Elementary, to Mastery Charter Schools, a high-performing network in the city. Four hours into a school board meeting, Sylvia walked on a resolution to reverse that decision, citing her conversations with parents and community members dismayed by the school’s persistently failing conditions. The move was emblematic of the complicated, complex lines around standing up for disempowered families, the heightened tensions around school conversions, race and achievement. Not helping matters was the murmurs that Quibila, deep in the work of parent advocacy and empowerment, was seen conversing with families in the surrounding Wister community, talking with families about the opportunities and potential with Mastery running the school.

You can almost hear their mother’s voice echoing in all this: “messy.” Through it all, the sisters have continued to do their work. Their current platform, Parent Leaders Advisory Network (PLAN), is back in their familiar wheelhouse of collaborating with families and local entities to push conversations. It means that they continue to be caught in a knotted world where “quality”—a word that the two women use often to talk about the importance of moving the community forward—has become synonymous with an educational agenda most closely associated with the education reform movement rhetoric. Their focus nowadays on parent convening, political action, school improvement and advocacy is likely a beautiful mess in a city still divided by charter and traditional school debates, funding crises and the emergence of similar types of parent advocacy groups that trend whiter and more affluent than the families they tend to work with.

Advocacy splits in all sorts of directions, routinely making heroes and villains of people sometimes in the same conversations, let alone the same week. There isn’t a linear path in long-term advocacy; it’s not a neat, linear ladder climbing from issue to issue, success to success.

It doesn’t always build, and Quibila and Sylvia’s work shows that it’s actually prone to political, financial and professional setbacks. For these women—sometimes accused as opaque, sometimes as too open and raw—there isn’t the luxury of tiring of the work, the city, the community and packing up and moving to a new opportunity. Philadelphia has continually changed over their lifetime, becoming aesthetically more cosmopolitan as narratives and alliances change on the dime of the city’s reinvestment strategy. And yet for all of that, some persistent things remain. High poverty and low literacy levels still stain the city. Black and brown children, despite the strides to reverse the story, remain disproportionately locked in substandard district and charter school conditions.

Thanks to the center city corridor of housing and business development, Philadelphia has slowly acquired a new brand and a new story. But if you ride far enough on SEPTA to the further reaches out, in some of those same North Philadelphia areas where these women once rode buses around the city as two black girls, and see how little has changed.

Tre Johnson is a writer, educator, advocate and part-time superhero. If you’ve been working in education or activism and would like to share your story, contact him at tre.johns@gmail.com