It is week 76 of our new reality and in many schools and districts sharp divisions over masking and vaccinations threaten to derail an already difficult return to in-person schooling.

As our campaigns across the 50CAN network work with parent advocates to put the needs of students front and center, we are excited to announce Michele Mason as our new Chief Operating Officer. We’re thankful to have such a strong advocate for children with deep experience in schools and communities on the team at this key moment.

Last time in the New Reality Roundup, we spoke with Meredith Olson of the VELA Education Fund on the educational opportunities that await students outside of the schoolhouse walls and examined the need to meet parent demands for a full-time, virtual option.

This week, we look at how partisan debates over masking have obscured the much more significant problem lying before the education sector: the vast learning loss students have experienced nationwide. We also highlight the work of Keri Rodrigues and the National Parents Union to make sure the views of parents are front and center in the halls of power when decisions are made.

Put the spotlight back on the needs of students

“As the nation emerges from the Covid-19 pandemic and billions of dollars of federal relief funds flow to states, resource allocation and strategic interventions should be targeted on the basis of need and tailored to specific student populations based on evidence identified in data,” we wrote this week in a letter to Secretary Cardona, alongside fourteen other education groups, including EdTrust, Chiefs for Change, the Data Quality Campaign and the National Parents Union.

The joint letter is part of a wider push to put a spotlight on the critical real needs of students, and that begins with every parent’s right to know how significantly their students have been impacted by the school shutdowns of the past two years.

That sentiment was echoed yesterday by the New York Times editorial board: “Governors and other elected officials are trying to whistle past the devastating learning setbacks that schoolchildren incurred during the shutdown. That story is coming to light in studies and reports that lay out the alarming extent to which all groups of students are behind where they should be in a normal academic year and how the most vulnerable students are experiencing the steepest drop-offs in learning … These findings constitute a scalding rebuke of those who have minimized the impact of the school shutdowns.”

In concurrence with the Times, at 50CAN we believe that without a return to regular assessments, our understanding will continue to be spotty at best. But the facts we do have right now are troubling: 9% of Newark students are on grade-level in math, information we have access to only because of journalist Patrick Wall’s FOIA request for documents. A 17% drop in proficiency rates for students in Memphis. A gap equating to six months of lost learning for Texas’ Black and Latino students. In Colorado, new math test results show a five point drop in student proficiency in fourth and sixth grades, and a seven point drop in eighth grade, compared to 2019.

Yet, the needs of children are at risk of being ignored as the spotlight shifts to the food fights among the adults. As Sarah Mervosh and Giulia Hayward write for the New York Times, “As summer fades into fall, nearly all of the major issues dividing the country have dropped like an anvil on US schools … For many of the country’s 56 million schoolchildren, it has been a year of lost learning and widening inequities. But at this critical moment, many school officials find themselves engulfed in highly partisan battles, which often have distracted from the most urgent issues.”

“Districts and educators are underestimating the very deep chasm between our education system and parents, families and communities,” Keri Rodrigues, founder and president of the National Parents Union, told us last week. “They underestimate the erosion of trust that has happened that the system has come to rely on. Parents trust their child’s individual teacher, but when it comes to principals, superintendents, systems leaders – that trust is gone. We’re fooling ourselves if you think we can flip a switch and put the toothpaste back in the tube.”

Rodrigues, who worked as a community organizer for over 25 years before founding NPU in January of last year, has emerged as a critical partner in elevating the voices of families nationwide. Those voices have clearly been heard: in recent weeks, Rodrigues and members of her union have met with the White House, Department of Education and Department of Health and Human Services to convey their concerns, along with insights from their regular and publicly available polling of parents.

“Eight out of ten parents have said the pandemic and school closures have been an eye-opening experience for them,” Rodriguez told us, noting that the time was ripe for systemic change, but would require partnership between parent organizers and local advocates. “There are moms and dads all over the country that are doing advocacy from their living rooms. We have to couple that in coalitions with local advocates, like those of the 50CAN network, who bring the deep policy knowledge and political acumen to drive real change.”

HawaiiKidsCAN was recently selected as the recipient of a prestigious Change Grant from the Hawaii Community Foundation, in part due to their efforts to provide internet access to rural and low-income communities which has now garnered HawaiiKidsCAN Executive Director David Miyashiro national media attention.

This week also marks the beginning of HawaiiKidsCAN’s #BelieveInBetterHI online giving campaign, as David works to build grassroots support for the work to put Hawaiian kids’ needs first. Supporters and partners from across the Aloha State have lined up to offer appreciation and testimonials for the work HawaiiKidsCAN has done throughout the pandemic.

In Denver, the Transform Education Now team is building upon legislation passed this summer to ensure districts meet parents’ requests for transparency in how federal funds are being spent. In a new op-ed, co-Executive Director Nicholas Martinez notes, “The proposed budget presented for the board’s consideration in May indicated that most of the federal stimulus dollars will go to maintain the status quo.”

After graduation rates soared this year in Santa Fe, NewMexicoKidsCAN’s Executive Director Amanda Aragon is pushing for more transparency on how students are actually doing. “I do know, out of an abundance of trying to navigate a crazy world, there was a lot of push from the education department to make sure that students were able to graduate,” she told the New Mexican. Tracking college remediation rates will help us understand if the high school graduation rate is representative of true student learning or merely shifting the work to other institutions. 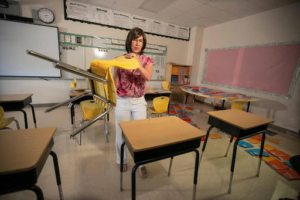 Third grade teacher and cancer survivor Teresa Murphy, who was selected as Miami-Dade’s 2022 Teacher of the Year, prepares to teach in her classroom for the first time in 17 months. “I love what I do,” Murphy told the Miami Herald. “And I don’t think I realized that I still love what I do, as much as I did Day One, until last year.” The challenges will be immense. As Ms. Murphy’s colleague, fourth grade teacher Lidys Toro asks, “How can I meet my learners, as far as what they need academically, but also emotionally, because they have gone through so much this past year?”