It is week 60 of our new reality and as many students enter their last full month of school, the basic task of providing every family with the option of in-person schooling remains incomplete.

“Biden celebrates school reopening but we’re still in an acute crisis: a third of K-12 students attend schools that aren’t offering a 5-day, in-person option. Millions more are opted out of school because of fear it’s unsafe. Black, Latino, Asian kids most likely to be out of school,” NYT reporter Dana Goldstein pointed out in reaction to President Biden’s address to a joint session of Congress last week, which largely sidestepped school closures.

This crisis in American education takes place against the backdrop of an enormous influx of federal education funding into the states with the promise of even more money in Biden’s new $4 trillion economic plan.

Last time in the New Reality Roundup, we looked at the importance of reimagining summer programming for kids and the need to stand up for measuring what matters.

This week, we take a closer look at several key victories in the Aloha State and explore the potential implications for education in Biden’s plan.

“As a Hawaii public school graduate, it was important for me to introduce SB242 and SB516 and collaborate with my colleagues in the legislature and community organizations like HawaiiKidsCAN to pass these bills,” Senator Donovan Dela Cruz said in a video message to constituents. “I truly believe this is a step towards closing the achievement gap and addressing the inequities that exist within our school system. I appreciate all the advocacy work done by the community to make this possible.”

The result of this collaboration is a new path forward into the future of education through courses, connectivity and career pathways.

The first bill, SB242, requires every school–including elementary and middle schools–to offer computer science education courses by the 2024 school year. The legislation puts a big emphasis on equitable access to these courses, with the state required to annually report the demographics of students enrolled in the coursework and provide additional support to underrepresented students in the program.

The second bill, SB516, establishes that families have a right to know about how well their childrens’ schools are preparing them for career-readiness. The bill also sets the goal of ensuring every child will emerge with the industry-recognized credentials necessary to secure a job that will allow them to earn the level of income needed to stay in Hawaii when they leave the public education system.

To support these efforts, HawaiiKidsCAN also championed a third bill, HCR161, which sets the goal of universal access to high-speed internet and technological devices for all students by the year 2030.

Taken together, this legislation represents an important step forward for education in Hawaii, placing the Aloha State at the forefront of efforts to modernize their public school system to meet the new needs of students in today’s world.

Start planning for the next big federal influx of funds

“The proposal includes $1 trillion in new spending and $800 billion in tax credits, much of which is aimed at expanding access to education and child care,” write Dana Goldstein and Jim Tankersley of President Biden’s American Families Plan.

If passed, the legislation would result in an enormous influx of federal funding that would bookend the beginning and ending stages of the traditional K-12 public education system. The proposal includes $600 billion for child and dependent care tax credits, $225 billion for child care, $200 billion for free universal preschool, $109 billion for two years of free community college, $85 billion for Pell grants, $62 billion for completion and retention programs and $46 billion for colleges and universities serving minority groups.

In his speech last week, Biden framed the investments as necessary for American students to reverse our nation’s drop in global education rankings and to emerge ready to compete on a global stage where China is vying to supplant us as the next superpower.

HawaiiKidsCAN isn’t the only state with a win this week. The governor of New Jersey signed the first bill of a larger package that JerseyCAN developed with Senator Teresa Ruiz to improve teacher quality, broaden teacher pipelines and increase the recruitment of teachers of color. This first bill creates a reciprocity program for teacher certification with other states, easing the ability for the state to recruit high caliber teachers currently teaching outside of the Garden State.

TennesseeCAN also saw major wins in the Volunteer State as the legislature passed a budget that improves and guarantees parents will have the ability to access the education that’s right for their children. The budget includes $24 million for charter school facility funding and $29 million for Education Savings Accounts. It also makes critical inroads into recovery programs to address learning loss, with over $141 million earmarked for the effort, and additional funding to transport students to summer camps across the state.

NewMexicoKidsCAN’s Amanda Aragon continues to be an unwavering voice for transparency and accountability. After the Department of Education approved a waiver for standardized testing requirements, Aragon fired back in the press. “For the second year in a row, we have no idea how New Mexico students are doing which means we can’t then come back and provide what they need. Without that data, we won’t know whether or not we’re wasting that money or whether or not we’re actually using it to give every kid what they need to get back on track after last year,” she told KOB4 News.

Transform Education Now in Colorado is hard at work on a bill for greater transparency and accountability for the federal education dollars being spent in the state. That bill has successfully passed out of the House and deliberations are ongoing in the Senate. Meanwhile, the team is working with a coalition to research and define a high bar of quality and equity in schools across the state. 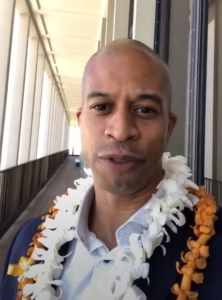 Hawaii State Representative Justin Woodson, lead sponsor of the House companion bills for HawaiiKidsCAN’s important wins this week, celebrates with a video message after the bills’ passage. “I wanted to say a special mahalo to David Miyashiro and HawaiiKidsCAN, because it is always an honor and privilege to work with you folks. We look forward to working with you next year.”