It is week 56 of our new reality and in states across the country education advocates are hard at work to put the policies in place to help students on their path out of a challenging year.

Last time, we issued a call for states and districts to aim higher in their use of federal education funding and for advocates to make the case for ensuring we measure what’s working in these plans.

This week, we put a spotlight on the growing number of policy wins across the country that provide more resources and options to families and we check in on the Garden State, where the JerseyCAN team is driving a statewide conversation about learning loss.

Expand Options for Families to Speed Up the Recovery

“Nearly 50 school-choice bills have been introduced this year in 30 states,” the Wall Street Journal editorial board observes. “It’s a testament to how school shutdowns have made the advantage of education choice more evident, and its need more urgent.”

Last week, those efforts culminated in multiple policy victories putting 2021 on track to be one of the most successful to date for advocates of greater educational options. Among the most important was SB 47 in Georgia, a key priority for the team at GeorgiaCAN, which was passed by the legislature and sent to the governor for his signature. When signed into law, it will provide an additional 55,000 students with access to the program. Families will receive an annual scholarship of about $6,000 per child under the program. GeorgiaCAN Executive Director Michael O’Sullivan explained why he and his team had pushed so hard for the bill: “Children with special needs deserve every opportunity to attend a school that works for them and their unique needs.”

The victory in the Peach State was joined by others around the country. In West Virginia, the Governor signed a bill to create the first Education Savings Account (ESA) in the state’s history. It will provide parents with about $4,600 annually for private tuition, tutoring and more. In Kentucky, the legislature overrode a veto to create a new $25 million tax-credit scholarship program. Meanwhile in South Dakota this month, the Governor signed a bill to expand eligibility for the state’s tax-credit scholarship program. Work continues on other major expansions of educational options in Arizona, Florida, Indiana and Missouri.

After over a year of the school closures, parents know their kids need more than a return to normal, they need the learning environment that is going to best help them in a year of recovery. Empowering families with new educational options is one important step to getting there.

Provide Families with the Facts on Learning Loss

“It is projected that nearly two out of every five students who were previously proficient in ELA are no longer on-track and about half who were proficient in Math are not meeting or exceeding expectations anymore,” JerseyCAN states in their new report, A Time to Act.

“We felt it was important to use real New Jersey students and real New Jersey data to tell the story of where our students are,” JerseyCAN Executive Director Patricia Morgan told Gothamist. “Without knowing the problem you are solving you can’t meaningfully solve for it.”

Among the report’s recommendations: Extensive summer programming, high-dosage tutoring and giving parents the option to hold back or retain their child for additional learning supports.

Gothamist’s write-up of the report was one of a dozen media hits which also included stories in NJ.com, Chalkbeat and NJTV–a testament to how eager parents are to understand the cost of a year without in-person education.

Legislative progress is happening across the 50CAN network. HawaiiKidsCAN’s three priority bills have all passed out of the Senate and the House Education Committee, with only the House Finance Committee vote remaining before the bills are brought to the floor. As the legislative work continues, Executive Director David Miyashiro penned a new op-ed for the Star-Advertiser, advocating for specific proposals the new superintendent should take to address learning loss.

Similar progress is being made in the Constitution State, where all three of ConnCAN’s priority bills have passed the Education Committee and are now with Appropriations. The bills include a comprehensive overhaul of the state’s funding formula so that all types of schools are equitably funded, an expansion of minority teacher recruitment and programs to mitigate learning loss.

The special needs scholarship program wasn’t the only legislative victory for GeorgiaCAN. Along with their partners at the Georgia Charter Schools Association, the team was successful in the push to increase per pupil funding and facilities support for charter schools and provide teachers with the option of being part of the state health plan. Other victories in the Peach State included protecting learning pods from unnecessary red tape and providing homeschoolers with the option to join their neighborhood school’s sports teams and extracurricular activities.

In the Volunteer State, the push to focus on addressing learning loss continues to gather momentum. “A great use of federal Covid relief funding is to quickly recruit, train and support tutors this summer who are committed to building a short-term, but strong relationship with the students, and with open lines of communication with the students’ most recent teachers,” writes TennesseeCAN’s Victor Evans in a new op-ed for the Tennessean.

NewMexicoKidsCAN’s Executive Director Amanda Aragon is standing firm in insisting that children get more time with their teachers through summer and afterschool academic programming. Her voice was part of a chorus in an Albuquerque Journal editorial calling for districts to opt-in to the state’s fully funded extended learning day program. 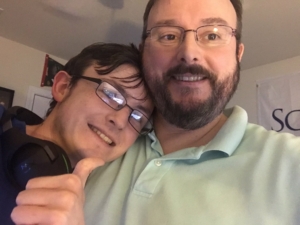 Scot Turner celebrates with his son as SB 47, the expansion of the special needs scholarship, passed both chambers. “We’re cheering over here like we are watching a college football game,” Scot wrote in a powerful reminder of the thousands of real kids that will benefit from the legislation spearheaded by GeorgiaCAN and their partners.