When we have written about our “new reality” in this roundup the past 44 weeks, we have used that phrase to refer to a pandemic that has created an emergency situation for America’s school children.

The insurrection that threatened the peaceful transfer of power in our nation’s capital last week is another kind of “new reality”–one that strikes at the heart of American democracy.

The proximate causes are the actions of President Trump, who on the morning of January 6 directed the angry mob of supporters he had invited to Washington DC to march on to the Capitol, where a joint session of Congress was set to certify his loss. “You’ll never take back our country with weakness,” he implored. “You have to show strength, and you have to be strong.” A few hours later five people were dead, including 42-year-old police officer Brian Sicknick, who was bludgeoned to death by insurrectionists with a fire extinguisher. The hearings were cut short as our elected representatives fled for their lives and the Capitol building lay in shambles, the result of the first mass breach of its walls by enemies of our government since the War of 1812.

As we wrote in the wake of the tragedy in Charlottesville in July 2017, “When you choose to march with Nazis you are rejecting our country’s founding belief that all people are created equal and dishonoring the basic convictions of the American political system. Because our common humanity binds us together, we also know that there aren’t two sides to this debate; only right and wrong.”

By inciting violence to disrupt the transfer of power, Trump proved beyond any reasonable doubt he is unfit for his office. The correct response now is that he be impeached, removed and barred from ever holding elected office again.

Whether the President is removed by Congress next week or simply leaves the nation’s capital when his term expires, we know that the threat to American democracy runs deeper than the flaws of one man. The collapse of trust in our country, the drumbeat of disinformation, the racism that twists institutions into instruments of oppression, ever-deepening political polarization and the increasing normalization of violence as a means of change have collectively brought us to the brink of disaster.

There are no easy answers on our path out of the problems we face, yet we continue to believe that local advocacy–grounded in hope, committed to building bridges across divides, focused on delivering real change for communities in need–can make a difference. This, and the belief that Americans can and will overcome the forces of evil that attacked our democracy last week, are what inspire us to work at 50CAN.

From civics to history to the critical thinking needed to separate fact from fiction, events like these are a reminder of how crucial it is for our children to receive an education that fully prepares them to uphold the great American experiment.

That work continues in neighborhoods and statehouses across our network this week and the weeks to come in this new year.

“A small number of teachers and school nurses in a few states have been vaccinated against the coronavirus, but most are still waiting amid a stumbling rollout of the vaccine across the country,” writes Valerie Strauss for the Washington Post. “The Centers for Disease Control and Prevention has recommended that states prioritize teachers as part of the second group of people eligible for vaccines — but each state will make its own decision, and there are big differences in approach among governors.”

Starting today, teachers in Michigan will be eligible to receive the vaccine, based on new guidelines issued by Gov. Gretchen Whitmer. They will join police officers, prison and jail officers and child care providers as the rollout continues in the Wolverine State. The DC Mayor announced last week that K-12 teachers will be included in the next round of vaccinations that begin Jan. 25, joining child-care workers, grocery store workers and other front-line workers in this priority grouping.

At the same time, as Eliza Shapiro and Shawn Hubler pointed out in The New York Times last month, even where teachers are being prioritized for vaccination, “it may be too early for parents to get their hopes up that public schools will throw open their doors soon, or that students will be back in classrooms full time before next fall.”

Reporting last week from the San Francisco Chronicle indicated that state union officials still have concerns: “Right now there’s no research evidence that the vaccine alone eliminates or reduces transmission,” said Claudia Briggs, spokeswoman for the California Teachers Association. That’s why advocates will continue to have to push to ensure that our most vulnerable students are also prioritized by creating safe, in-person learning environments.

“Miguel Cardona is a very steady person and he really, really cares about kids – specifically kids that have been marginalized,” ConnCAN Executive Director Subira Gordon told Mike Petrilli and David Griffith on the Education Gadfly Show, “He wants the best for all kids, whether they attend a magnet school, charter school or traditional public school.”

Cardona, who was nominated last month by President-elect Biden to lead the Department of Education, has been noted for receiving the support of both teacher unions and student-centered reform leaders.

The conversation with Subira is wide-ranging, covering her insights into Cardona’s efforts on chronic absenteeism as well as his work on the state’s achievement gap task force. She also explores the nominee’s leadership style and potential policy agenda.

When asked by Petrilli and Griffith on reading the tea-leaves of Cardona’s policy leanings, Gordon responded: “Cardona has been very clear that Connecticut was not waving standardized testing. He was clear we’d be doing testing in 2021. And while I can’t speak to what his national platform is going to be on charters, I have not found him to be unfriendly whatsoever to charters.”

Listen to the full interview here.

In the first few days of 2021, 50CAN’s campaigns across the country are beginning to see real progress in turning their ideas into action and legislation. Back in December, the team at TennesseeCAN released a memo to legislators on the importance of addressing learning loss. This week, Governor Lee announced that a special session on education will commence on January 19, where legislators will work to address learning loss, accountability and early literacy.

Last year, JerseyCAN released a two-part report on the educator workforce and that study has begun to yield results with the Senate Education Committee set to debate a bill package introduced last August by Senator Ruiz. The policies include a loan redemption program for bilingual teachers, a male teachers of color pilot program, a teacher apprenticeship program and mandated training on culturally responsive practices. 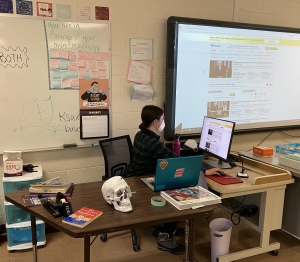 Katie Saint Raymond, a high school civics teacher at Spaulding High School in Barre, Vermont, prepares for a discussion with students last Thursday, following the insurrection at the Capitol. “The best that I could do was just to be as honest with them as possible,” Saint Raymond said when asked about how she approached the conversation, “I tell them this is something I have never seen in my lifetime. My mom, my grandma did not see this in their lifetimes.”