When the dust is settled on last week’s election and all the votes are counted in the US House of Representatives races, no matter which party prevails it is clear that they will be working with one of the smallest House majorities in American history. This will make pushing through big education legislation unlikely if not downright impossible.

As 50CAN President Derrell Bradford put it in an election debrief hosted by the American Enterprise Institute last week, “The Covid spigot will be closed.”

That will compound the fears of district leaders as they look toward an approaching fiscal cliff as ESSER dollars run out in 2024. Edunomics Lab’s Marguerite Rosa predicted the danger last year: “It doesn’t seem to matter why funding drops—be it a result of steady enrollment decline, the arrival of a new more equitable state funding formula, a local levy failure, or in this case, when federal relief funding inevitably ends—a reduction of even 1 percent of funds wreaks fiscal havoc on most districts.”

This makes the work of local, student-centered advocates all the more essential in driving limited resources to policies and programs that will have the highest impact in rectifying the damage done to children during the pandemic.

We have a collective responsibility to ensure that the programs we know work–high quality tutoring and summer camps, the science of reading, pathways for a more diverse workforce and direct aid to families–are continued. Pandemic-era innovations that are the initial building blocks for the future of American education, from learning pods and career programs to the civic and community partnerships that enable education outside the schoolhouse, must be cultivated and expanded as well.

It will be up to state and local advocates, working round the clock at statehouses and school board meetings in the coming months, to keep the focus on kids.

“Researchers say the 2022 election had the second highest voter turnout among voters under 30 in at least the past three decades,” reports Ashley Lopez for NPR. Yet, even with this success in youth turnout, this translates into only 27 percent of people under 30 actually casting a vote in the election. Clearly there is real progress but also much more work to do.

What’s the implication for the politics of education? Our best insight into Generation Z’s views comes from polling commissioned by Murmuration and first reported by Kevin Mahnken in The 74, which found that divisions on education policy were nearly as stark between Gen Z voters and older generations as they were between Gen Z’s left and right. Young Democrats, for example, support school choice by a 20% point margin; young Republicans have a favorable opinion of teacher’s unions by a 15% point margin. The traditional political divisions don’t hold and the extreme “culture war” approach to education issues is a particularly bad fit for this new generation.

All this suggests that local and national advocates will be well-served by making outreach and engagement of Gen Z a key priority. Derrell Bradford and Ned Stanley view these young voices as essential in our efforts to build the education system of the future, which is why they’ve ensured that each cohort of the National Voices Fellowship has featured young voices along with more seasoned communicators. “Their energy is contagious for the entire group,” Ned tells me, “Their proximity to the experience of schools and classrooms gives them an authenticity that can’t be countered.”

This is particularly important now, as the experiences of young people in school during the pandemic will be crucial guides as we debate the policies needed to ensure their recovery.

That’s why we’re doubling down on our support for Gen Z. In 2023, the National Voices Fellowship will be expanding to a second fellowship made up solely of people who were high school and college students during the pandemic.  We’re excited to share more–and interview any candidates you recommend–in the coming months.

How did education advocates do in last week’s elections? Below is the update Jonathan Nikkila, the Executive Vice President of the 50CAN Action Fund, shared with the Action Fund’s supporters last week. Jonathan and team are celebrating two records: involvement in nearly 100 political races across the country and winning 75% of them.

“The highlights of the Action Fund’s 2022 electoral activity:

50CAN President Derrell Bradford spoke on an AEI panel discussing the implications of the midterm elections on our education system.

Urban Institute writes on how the country can best support young parents, finding that we need to take a collaborative, cross-sector approach.

The Manhattan Institute’s new report focuses on redlining and educational boundaries, finding that open enrollment districts are often not working as intended due to logistical constraints like transportation preventing many families from accessing schools.

According to polling from the Walton Family Foundation and Stand Together Trust and reported in The 74, a majority of parents want control over their children’s educational experiences. Over 70% of parents believe that learning should happen everywhere. 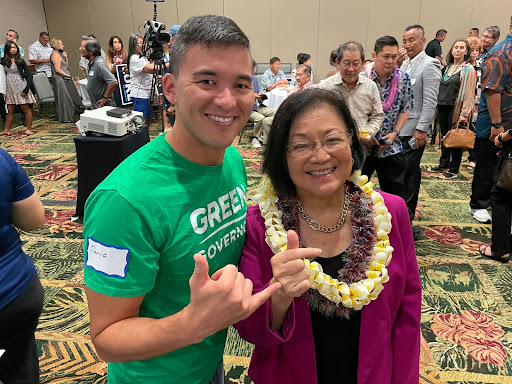 HawaiiKidsCAN Action Fund Executive Director David Miyashiro poses with United States Senator Mazie Hirono (D-HI) at an election night party after a day that saw a number of the Action Fund’s legislative champions reelected. After a string of policy innovations during the pandemic, Hawaii saw smaller drops on the 2022 NAEP than nearly any other state. Now, it will take the momentum into the 2023 legislative session with the opportunity to do even more for kids.