In the fourteenth week of our new education reality, we continue to grapple with the challenging news of an unequal education system that has only grown more unequal in the era of distance education while simultaneously drawing hope from the fact that country is standing together in historic numbers to demand justice for George Floyd and the many other victims of police brutality.

Six years ago, in response to the murder of Michael Brown and the decision by a grand jury not to indict Ferguson police officer Darren Wilson for that crime, the 50CAN leadership team wrote that “the injustice of an unequal education is just one of many interconnected and deeply rooted injustices that must be undone if we are to create the society of opportunity we seek and we cannot afford to be silent on the other injustices that work against the students we are working so hard to serve through our education advocacy campaigns.”

Just as we did back in 2014, and in every year since, the 50CAN team stands in solidarity with the Black Lives Matter movement in the fight for the right of Black Americans to live lives free from the violence and oppression of racist policing.

This week, I talk with Derrell Bradford, 50CAN’s Executive Vice President, about the intersection of Black Lives Matter and education reform, what we have learned from the past six years and where we go from here. We also look at how the education system did not deliver on its promise over the past several months, examine why it didn’t have to be that way and discuss the implications for fall.

Support, and learn from, #BlackLivesMatter

“Black people in America are the only people who have both been in physical bondage and intellectual bondage through policy,” Derrell Bradford shares with me in a new video conversation. “And so we can’t ever meet the highest expectations of who we want to be as a country unless we look at that and decide we’re going to attack it.”

In our conversation, we touch on the similarities and differences between how the criminal justice system and our education system have failed Black Americans, the unexamined racism behind appeals to nostalgia in public education, the necessity of disrupting discriminatory boundaries and the joy of finding anti-racist protests in unexpected places.

Look to the leaders who refused to fail

“New research suggests that by September, most students will have fallen behind where they would have been if they had stayed in classrooms, with some losing the equivalent of a full school year’s worth of academic gains,” writes Dana Goldstein for The New York Times. “Racial and socioeconomic achievement gaps will most likely widen.”

“The disparities in educational progress do not appear to be caused by any lack of effort on the part of families,” Goldstein reports. “The poorest parents spent about the same amount of time during school closures assisting their children with learning — 13 hours per week — as those making over $200,000 per year.”

Instead the disastrous loss of learning among poor families is a result of the inequalities within our education system that existed before Covid-19 and the failure of most schools and districts serving poor families to maintain instruction during the crisis.

Yet, as we have documented in this newsletter over the past three months, this was a preventable tragedy. The schools and districts that broke through the bureaucratic resistance and creatively problem-solved for kids found a way to ensure that high-quality schooling continued even when the school buildings were closed. From public districts like Phoenix Union and Marietta City Schools to charter school networks like Uncommon, Success and Achievement First, we saw firsthand in our video interviews the way leaders could overcome the challenges in their way and continue to meet the needs of their students.

“The calls for change and justice must be met with real and concrete action,” write TEN‘s Ariel Smith and Nicholas Martinez in a statement advocating for the Denver School Board to cancel their contract with the Denver police department. “Our schools must be a place of peace, of safety and a place where identity is celebrated.”

Across the 50CAN network, our local campaigns have stepped forward to voice their support for Black Lives Matter and bring calls to action into the education world, including GeorgiaCAN, HawaiiKidsCAN and JerseyCAN. And Atnre Alleyne, executive director of DelawareCAN shared further reflections.

Our campaigns also continued their efforts to invest in the organizing strength of their communities. TennesseeCAN organized calls to connect community members with decision-makers, having hosted a call with Senator Steve Dickerson and preparing for another next week with Senator Ferrell Haile, the senate speaker pro tempore. DelawareCAN hosted a Facebook Live conversation with the state’s election commissioner. And organizers from across the 50CAN network held a first-ever virtual seminar on online organizing.

TennesseeCAN also continued to drive the conversation in the Volunteer State regarding the use of CARES Act stimulus funds, with Executive Director Victor Evan’s op-ed on the topic being republished by the Commercial Appeal. And in New Jersey, the JerseyCAN team kicked off its new cohort for their teacher leadership fellowship. 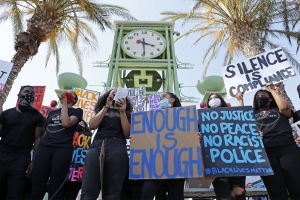 In the fourteenth week of our new education reality, we continue to grapple with the challenging news of an unequal education system that has only grown more unequal in the era of distance education while simultaneously drawing hope from the fact that country is standing together in historic numbers to demand justice for George Floyd and the many other victims of police brutality.