100 weeks ago, Tom Hanks and NBA basketball player Rudy Gobert revealed they were in quarantine after contracting Covid-19, San Francisco became the first city in America to announce that they were locking down and we recognized as a nation that a new reality had arrived. In our first issue of this newsletter, I wrote: “Most experts estimate that developing a vaccine for Covid-19 will take 12 to 18 months or longer. That means we need to accept school disruptions as a new normal that may not last only weeks or months but continue through much of the year.”

That prediction of long-term school disruptions unfortunately came true, time and time again. Now, 22 months later, Apoorva Madavalli writes for The New York Times that the “best-case scenario is that the Omicron variant is the last bad variant of the virus and that the worst is behind us. It’s possible that as early as March or April, we’ll start to get back to some version of our pre-pandemic lives.”

Yet, “back to normal” can’t be our goal for American education. At 50CAN, we’re seizing upon the desire among students and their families for something better. This push for better can be found in the work captured in our recent 2021 CANnual Report, the 2022 policy goals of our local leaders and the call for a new generation of advocates in the recently opened applications for our National Voices Fellowship, whose participants and alumni will play a key role in building support for the education system of the future among parents, journalists and the public.

Last time in The New Reality Roundup, we featured NewMexicoKidsCAN’s Amanda Aragon on the launch of her news website, NMEducation.org, and looked at the importance of building great tutoring programs to address learning loss.

This week, we explore the importance of seeing the potential in every child by spotlighting two stories: one, of our Board Chair Michael Phillips and another of a child in Georgia who was given a new chance through a special needs scholarship.

“We have zero tolerance policies that exclude children from learning time and they are oftentimes placed right in front of the criminal justice system at an early age,” 50CAN Board Chair Michael Phillips told the TODAY Show. “If we are really going to have equality and equity, then we should have restorative practices … because what they did is not who they are.”

Michael’s commitment to this work comes out of his own experiences in Baltimore’s public schools. “When you don’t see what you can become, when you don’t see success in your color often, it’s very easy to become what you always see,” Michael shared.

At six years old, Michael told his third grade teacher he wanted to be a lawyer. “She said that would never happen for someone like me,” he shared. When he raised his voice in response, shouting that he could become a lawyer, he was given a suspension. It was the beginning of what would become years of increasingly harsh punishments that pushed him further from that dream. 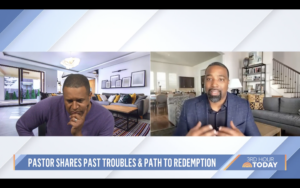 That story becomes a core scene in Michael’s new book, Wrong Lanes Have Right Turns: A Pardoned Man’s Escape from the School-to-Prison Pipeline and What We Can Do to Dismantle It, which traces Michael’s journey from his troubles in school to the death of his father; from dealing drugs to an arrest where he was facing 30 years in jail. After months spent alone in jail awaiting a trial, a judge called him into his chamber and gave him a choice: prison or a special program that would send him to college instead.

He seized that opportunity and embarked on a new life that would lead to a rediscovery of his faith, graduating college, success in the world of business, returning home to Baltimore to found a church, opening a charter school, serving on the Maryland State Board of Education and leading our work as 50CAN’s board chair.

Address the immediate concerns of students with special needs

“Reading is the foundation for every aspect of our lives,” Missy Purcell, a parent of a child with dyslexia and a graduate of GeorgiaCAN’s parent advocacy fellowship, told the Gwinnett County school board last week. For Missy and the parents she has organized, this was the latest event in what has been a months-long advocacy campaign that has already succeeded at bringing mandatory dyslexia screening to the district, and secured a plan to expand teacher training and programming for dyslexic students.

Missy’s fight for her son also underscores the need for parents to be able to select the education system that’s right for them. After growing increasingly concerned that her son’s neighborhood school wasn’t able to meet his needs, Missy enrolled him in a private school instead through the Georgia Special Needs Scholarship, a program that was established and expanded through GeorgiaCAN’s advocacy work.

There are seven million families across the country who can relate to Missy’s frustrations, especially in the midst of a pandemic that has been especially difficult for students with special needs and their families. “Modified instruction, behavioral counseling and speech and physical therapy disappeared or were feebly reproduced online, for three, six, nine months,” NPR reported.

Equipping parents with the skills, tools and resources to advocate for their children has been at the core of GeorgiaCAN’s Outreach Director Steven Quinn’s work. Over nearly a decade, Steven has organized thousands of parents, giving parents like Missy the ability to bring about change while also building momentum for GeorgiaCAN’s statewide policy priorities. In his new role as 50CAN’s National Organizing Manager, Steven is now bringing this expertise to our campaigns across the country.

HawaiiKidsCAN had a strong start to the 2022 legislative session. As of the start of February, five of the team’s priority bills have passed out of their all-important first committees. Policy initiatives include a statewide family grant program, incentive funding to quality career readiness programs, and the diversification of state board of education members.

In Tennessee, Governor Bill Lee gave his State of the State address that touched on several core priorities that have been advanced by TennesseeCAN, including $750 million for a new student-based funding formula, $500 million for career and technical education, $25 million to continue summer learning camps and $32 million for charter school facilities. Providing direct aid to families, another key priority for TennesseeCAN, was filed as SB2389.

In the Peach State, progress continues toward expanding students’ right to choose the education system that works for them, with one of GeorgiaCAN’s ESA bills, HB60, passing out of the House Education Committee.

NewMexicoKidsCAN’s Amanda Aragon made the case that with New Mexico spending an additional $3,000 per student this year, the state has the necessary resources to ensure budget transparency, restart student assessments and provide students with additional learning time.

The team at Transform Education Now fought for the creation of a new, bilingual elementary charter school in the Adams 14 district. This new option for families was approved by the school board after a close vote.

50CAN President Derrell Bradford participated in a debate on school choice and public education on C-SPAN. “The idea that the place where you live—and the zone around that place where you live—are the things that fund your school is fundamentally zero-sum,” Derrell argued. “The mindset is: MY house, MY taxes, MY school.”

Chalkbeat’s Matt Barnum investigates how the $190 billion of federal funding is being spent by districts, and finds that district plans vary in detail and that state and national data are limited.

Thomas B. Fordham Institute’s Chester Finn argues in Education Next that the rising desire from parents for dramatic change is grounded in the public education system’s failure to innovate.

Reconstruction’s Kaya Henderson announced a new package of online classes for Black History Month, focused on “bringing the beauty of Black culture, Black genius, Black excellence and Black history to students in a space where they can be unapologetically themselves.”

Education Week suggests that pandemic learning loss is not only worse than expected, but that the academic slide is continuing even now.

FutureEd continues their look at how districts are spending federal stimulus funds, finding that the biggest trends are in boosts to teacher salaries and upgrading HVAC systems.

US Secretary of Education Miguel Cardona spoke on his current priorities, including addressing expanding achievement gaps for students of color. 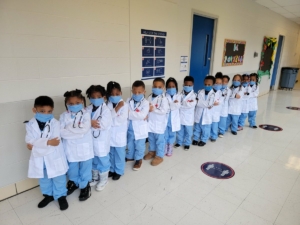 Dominique Foster, the 2022 Washington DC Teacher of the Year, shared a photo of Pre-K students dressed up as the doctors of the future in celebration of Black History Month. Foster, a teacher at Friendship Public Charter School, is beloved by her students and administration. “Working with some of our youngest scholars, you really have to find creative ways to bring them in and engage them in the learning,” her principal, Gregory Spears, told the Washington Post. “That’s never a question as you walk through her space.”