It is week 88 of our new reality and while nearly two weeks have passed since the election results in Virginia, New Jersey and elsewhere across the nation, the debate about what it means for education continues without much sign of slowing down. 50CAN President Derrell Bradford shared his reading of the post-election tea leaves in an op-ed for the New York Daily News.

Today, we take stock of the implications this month’s elections will have on the next year, and the immense opportunity for education advocates, and look at the disruption being spurred by severe school staff shortages happening in multiple states.

In the wake of the elections, respond to parents’ frustrations

“Republican Glenn Youngkin’s victory in Tuesday’s Virginia gubernatorial election was about schools,” writes Zacahry Carter for The Atlantic. “It wasn’t really about critical race theory or transgender rights — though those issues shaded the situation a bit by highlighting anxieties surrounding the education system. Fundamentally, the contest was about schools — specifically, how many parents remain frustrated by the way public schools have handled the coronavirus pandemic.”

With Youngkin’s come-from-behind victory earlier this month, we can expect education policy to remain a central topic of national, state and local political conversations from now until at least the 2022 midterm elections, with Republicans seeking to capitalize on long-simmering parent anger. “It was not just Virginia, but clearly Virginia was the loudest message,” House Minority Whip Steve Scalise told Politico. “The Youngkin victory is one more sign that issues like school choice, parental involvement in their kids’ education … are going to be even more powerful messages next year.”

According to Politico “Democrats hold the governorship in eight states up in 2022 that are less or similarly favorable than Virginia — Kansas, Maine, Michigan, Minnesota, Nevada, New Mexico, Pennsylvania and Wisconsin — a grouping that has topped Republicans’ target list.”

In San Francisco, which captured national attention for keeping schools shuttered while spending countless hours pursuing an ill-conceived plan to rename schools, three school board members are facing a recall. Perhaps San Francisco’s Democratic Mayor London Breed said it best when she endorsed the recall effort: “San Francisco’s public school parents aren’t just voicing normal, commonplace frustrations. Their kids have fallen far behind in their education, and they are breaking down from the mental health challenges of a pandemic, exacerbated by chaos in our public school system.”

Get creative about solving teacher shortages

“Schools in Seattle will be closed on Friday because they allowed too many staff members to take the day off following the Veterans Day holiday. A Michigan school district has already closed down for several days this month. And some Colorado public schools have moved to remote learning this week, while others canceled classes altogether,” reports Giulia Heyward for the New York Times, noting the impact that short and long-term teacher shortages are having on students who already face a steep climb to recover learning lost during the pandemic.

“Some schools are lowering their standards for substitute teachers, which were already lower than those for full-time faculty,” Heyward continues, “The situation has become dire enough that within the last month, at least two states, Missouri and Oregon, temporarily removed their college degree requirements for would-be hires.”

There aren’t easy solutions to these problems but we can be doing more to get creative about how we recruit and retain talented people in education. Across the 50CAN network, we’ve been working with elected officials in New Jersey to create more flexibility in teacher certification, including securing a new law, promoting teacher apprenticeship programs and developing new partnerships with colleges and industries. In Connecticut we helped create new residency programs for teachers of color. In North Carolina, we recently secured passage of a law that allows professionals to enter the profession in STEM-related subjects on a part-time basis, enabling engineers, scientists and others to contribute their expertise to the classroom.

At the same time, we need to Believe in Better by embracing a vision of education that isn’t limited to what happens inside school walls. That means providing extra support to students through open and connected learning, allowing students to earn credits from civic, non-profit, university, professional and government organizations and embracing the learning that can happen through internships and other CTE opportunities.

TennesseCAN’s Victor Evans chaired the first meeting for the Economically Disadvantaged and Highly Mobile Students subcommittee for the governor’s review of the state funding formula. “My committee members are a diverse group, ranging from representatives for the nonprofit sector to legislators to former educators and the NAACP,” Victor reports. In the coming weeks, Victor and his team will be hosting open sessions for parents to contribute their thoughts and will share notes and video from the ongoing meetings, with a goal to ensure that voices from all pockets of Tennessee are heard.

In North Carolina, Opportunity Scholarships have historically been capped at $4,200, but after recent legislationchampioned by CarolinaCAN was incorporated into the state budget, the cap has been removed and the scholarship amount will now be 90% of per-pupil funding. Not only was the legislation crafted to be future-proof, but it also will provide immediate relief to Carolina families, as it will immediately raise the scholarship amount to approximately $6,500. The budget has passed both chambers and is now in conference.

“I love the public education system in New Mexico, I just think we can do a lot better,” NewMexicoKidsCAN’s Amanda Aragon told a packed house at the New Mexico Economic Forum after a slate of candidates endorsed by her Action Fund PAC won, giving reform and parent-power minded electeds control of the Albuquerque Board of Education. The Albuquerque Journal-Constitution reported on the event.

FutureEd takes a look at the latest research on the political implications of teacher strikes.

ExcelinEd is out with a new analysis, comparing mandatory open enrollment policies across 20 states.

A for Arizona announced the awardees for the Arizona Transportation Modernization Grant, a fund to improve safe and reliable transportation access to students.

Transcend’s Jenee Henry Wood and Gerard Robinson offer USA Today three lessons for the transformation of America’s schools, including breaking education outside of the classroom box.

Brookings Institute explores how education systems adapted to Covid across the globe and what lessons can be learned from efforts to scale educational innovations.

Writing for the Fordham Institute, Dale Chu makes the case for K-2 assessments. 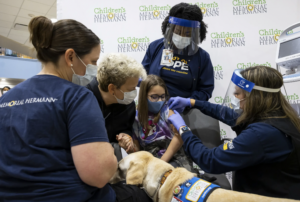 10-year-old Miranda Morales from Houston, Texas receives the pediatric Covid-19 vaccine with the help of a hospital therapy dog. Over 1 million students have received the pediatric vaccine since it was approved, with hundreds of thousands more expected in the coming days.