It is week 50 of our new reality and the debate over the right path forward for K-12 education in America shows no signs of slowing down.

Local advocates are advancing key education policies at state houses across the country while the Biden administration presses forward on an unprecedented $130 billion in additional educational aid to the states. The outcome of these legislative sessions and the way those federal dollars are spent will go a long way towards determining how well we meet the growing needs of 74 million K-12 students.

One important question under debate is what to do about summer, which we explored in our video interview with TennesseeCAN Executive Director Victor Evans in the last roundup and in the follow-up forum on tutoring as an emergency response. We also had a chance to take stock of what we learned in our 2020 policy campaigns with our new CANnual report.

This week, we focus on what it will take to provide every family with the option of in-person learning and how we can ensure that the funding we are providing to schools is equitably distributed.

In the last edition of this newsletter, we noted the need for advocates to support leaders who are standing up for students by insisting on the option of in-person education in areas where schools had been closed for almost a year.

Since that time, the debate over how and when to fully open our country’s schools has now become one of those rare moments where a discourse previously confined to education circles has broken into the national political conversation. It has, perhaps not surprisingly, also become increasingly intertwined with partisan politics. Republicans sense they can make in-roads with frustrated parents while the White House has struggled with muddled communications over their pledge to open the majority of schools in President Biden’s first 100 days.

In fact, a new working paper published by the Annenberg Institute at Brown University finds that “Partisanship was much more associated with district reopening plans than COVID-19 rates.” Writing in the Washington Post, Megan McArdle observes: “In districts where the schools are run by school boards, elected in low-turnout, union-dominated elections, the schools stayed closed.” Or said differently by the Washington Post editorial board: “Cities where mayors oversee schools have made far more progress in reopening during the pandemic than those with school boards. That has underscored the importance of school governance not disproportionately influenced by teachers unions.”

Trapped in this tug of war are parents who want options that their schools or districts aren’t providing. A new survey by University of Southern California found that about one in four families are unhappy with the type of instruction they are being offered, with the majority of those families wanting an in-person option that is not available.

Perhaps most alarming, a recent survey published in Education Next reveals large racial and income gaps in who is being given the choice of in-person learning. While 54 percent of white families say they had the option to send their children to school in-person, only 33 percent of Black and Hispanic families say the same. Likewise, 42 percent of high-income families said they had the option of in-person schooling compared to 29 percent of low-income families. If left unchecked, this opportunity gap in in-person learning is likely to expand the achievement gap in educational outcomes.

This week, ConnCAN captured attention across the state when Executive Director Subira Gordon, along with her coalition partners, held a press conference to urge the Governor and legislators to adopt a new funding formula that would redirect $420 million to the neediest schools and districts across the state.

“The proposed acceleration to the new ECS distribution formula is about investing in communities of color and breaking down the barriers of systemic racism in education funding,” Gordon told supporters and coalition partners, including Rep. Geraldo Reyes, the head of the Black and Puerto Rican caucus and Rep. Robert Sanchez, the co-chair of the Education Committee.

The disparities in funding pointed out by ConnCAN and their partners are a prescient reminder of the deep inequities that existed prior to Covid-19 and will continue without forceful advocacy. As the country focuses on reopening schools and recovering from the pandemic with an huge influx of new federal education funding, having a framework grounded in equity will take on even more urgency.

“The data cries out for aggressive intervention,” HawaiiKidsCAN’s David Miyashiro testified last week to the state board of education, as he continues to advocate for using federal funds to establish a high-dosage tutoring program. He also testified in opposition to the Hawaii Department of Education’s request for a waiver that would shorten the school year. Read David’s full testimony on the HawaiiKidsCAN blog.

In New Mexico, NewMexicoKidsCAN continues to advocate for HB0213, a bill requiring districts to maintain a special education services fund that would provide funding for families of any student not receiving in-person services. They’ve issued a call to action for parents to add their voice.

For DelawareCAN, State Outreach and Partnerships Coordinator Erika Gutierrez hosted a series of convenings for Spanish-speaking families on how to advocate for their children during the pandemic. 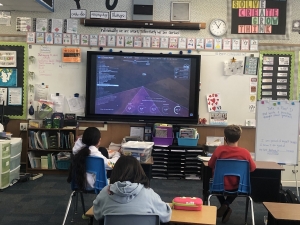 Students across the country, including those at Walnut Elementary School in Conejo, CA, cheer on NASA’s Perseverance rover as it attempted to land on Mars. The school, that serves Pre-K-5, has operated on a blended learning model since reopening in November, giving parents a choice of virtual instruction or in-person classes.