We’re now in week 32 of our new education reality and as Emily Peck and Rebecca Klein observe in an important new article in the Huffington Post: “The kids are not all right.”

“It’s been seven months since schools in the U.S. shut down to deal with the pandemic and the economy cratered, and across the country, a generation is falling behind,” they write. “Young children are suffering learning losses. Some are simply failing to log in to online school. Enrollment in public schools is down. Teenagers are at risk of dropping out … If policymakers don’t act with urgency, the scars could be long-lasting; so much potential will be lost, so much talent wasted.”

Meanwhile, as Lauren Leatherby documents in The New York Times, coronavirus cases are climbing towards a third peak, which will put even more pressure on school systems that are struggling to adapt to this new reality.

Last time in The New Reality Roundup, we presented the fall campaign goals from across the 50CAN network to address the urgent needs of kids and families in the communities we serve.

This week, we look at why we need to set our sights on more than just a “return to normal” in education by breaking free of historical injustices like educational redlining so that all kids from every background have the same opportunities to learn, grow and thrive.

When it comes to education, aiming for a “return to normal” after Covid-19 will leave too many kids behind. That’s because, as 50CAN Executive Vice President Derrell Bradford explains in a compelling new video, while “America is a country founded on equality” the truth is that “some of our systems, particularly our education system, have never been truly equal. Why is this? One example is redlining … Even though redlining has now been outlawed, if you look at a map the school zones of today now align with the color-coded zones from the 1930s.”

Derrell argues that if “we really want to make meaningful progress on big seemingly intractable problems like racial injustice, we need to make significant structural improvements to our public education system. One solution is simple: stop assigning kids to public schools based on their home address.” That’s why 50CAN recently partnered with the LeBron James Family Foundation and Stand Together to focus on this issue and bring this message of change to communities across the country.

While ending redlining can’t happen overnight, there is important work we can do right now to remove the barriers keeping children away from the educational opportunities they need. One example is found in Connecticut, where ConnCAN recently announced a plan “to provide families that are currently facing inadequate online district offerings with in-person options in neighboring districts.” Under the plan, families will be able to bring a prorated $11,525 per child from the state to the new school or district to enable this public school choice.

Shine a light on the non-academic costs of Covid-19

“Parent and child well-being has taken a serious hit during the Covid-19 pandemic, three studies published this week in Pediatrics show,” writes Mary Van Beusekom for the Center for Infectious Disease Research and Policy. Among the findings:

More evidence of the enormous stress being felt by American students is found in a recent report by CNN: “In an average year, calls and texts to Teen LifeLine decrease between 30% and 40% over the summer. Kids are simply less stressed during summer vacation. This year, summertime volume at the hotline went up by 6%, instead.”

Parents know that a lack of social interaction can have drastic effects on their children’s mental well-being and personal growth. Yet, we still don’t have good ways to help measure the social-emotional costs on children as this crisis enters its eight month. It is one more reason we need an approach that seeks to both #MeasureEverything so we know how our children as doing and also #FundEverything so that kids can make the most of such a challenging environment.

Last week, we announced that for the first time in 50CAN’s history, our network launched fall campaign goals to meet the immediate needs of students and families in the most sustained crisis our education system has faced. We’ll be keeping you updated on the progress of these campaigns in the New Reality Roundup throughout the rest of the year.

The TennesseeCAN team secured a win when, after months of pushing for expanded broadband access in rural communities, a new round of investments totalling $17 million was made by the US Department of Agriculture. The funding will rapidly expand high speed internet access, giving more students access to distance learning. Executive Director Victor Evans was also named to an advisory group to craft a transition plan for ASD schools to return to the control of local districts.

HawaiiKidsCAN celebrated Senators Hirono and Booker for introducing the Learning Opportunity and Advancement Act, with Executive Director David Miyashiro telling Maui Now, “By investing in school and system capacity, LOAA will help to mitigate the impact of COVID-19 on learning loss, while helping our schools more boldly take a step forward into the future of learning.” In addition, an editorial in the Star-Advertiser, the state’s newspaper of record, encouraged the school system to be flexible and innovative, citing HawaiiKidsCAN’s WiFi on Wheels program as a model example.

In Denver, TEN’s co-Executive Director Nicholas Martinez penned an op-ed for the Denver Gazette, advocating for direct stipends to parents to find alternatives to a distance learning program “that is failing many of our children.” And in Georgia, a coalition of advocacy organizations spearheaded by GeorgiaCAN wrote a letter to Governor Kemp urging him to use CARES Act dollars to directly fund low-income parents and parents of students with special needs. The letter is already garnering attention, with reports from both CBS and FOX. 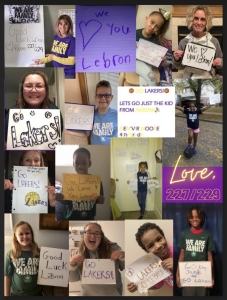 Students from LeBron James’ I Promise School created a virtual collage to wish the player good luck before game three of the NBA Finals. LeBron clearly heard them, given that the finals ended with his fourth championship and fourth Finals MVP Award. Thousands of students have benefited from James’ focus on education, and millions more will join them as his foundation dedicates itself to advancing equity and excellence throughout the system.