We’re now at the beginning of week 12 since school buildings in America closed their doors. The past week has been a particularly difficult one for advocates across our country as each day brought searing reminders of the broader injustices we face as Americans while we continue our work to ensure all students receive the education they deserve.

We believe that Black Lives Matter and we stand in solidarity with all those who have protested over the last week to elevate the issue of police brutality. Every American deserves to live a life free of fear.

Last week, we focused on the questions superintendents, state task forces and advocates are trying to answer as they think about what school will look like in an autumn that is still full of unknowns. This week, we turn our attention to a topic even closer on the horizon: how we can set a high bar for summer learning and the role of advocates in helping districts and legislators craft an approach to summer that goes beyond business as usual.

And as we bring this initial spring chapter of our new reality to an end and embark on this second summer chapter, a final note on The New Reality Roundup. This summer, we’ll be sending the NRR every other week rather than weekly, in order to clear space for more direct support for our on-going advocacy campaigns. This means, your next issue of The New Reality Roundup will be on June 15th. For real-time updates from the field in between these editions, please follow us on Twitter, Facebook and Instagram.

Set a high bar for summer learning to stop the slide

“If we do nothing, children will come back 30 percent to 50 percent behind in reading and math,” Dr. Grant Rivera, superintendent of Marietta City Schools tells Steven Quinn, state outreach director at GeorgiaCAN, in our new video interview. Rivera made critical choices early on that have made a difference: every student now has regular access to free meals, internet and devices and Marietta schools are seeing 93 percent attendance and connectivity. Building on this early leadership, Rivera and his team are now hard at work on implementing robust plans for summer learning.

“Our goal was: continue learning throughout the summer so we’re not in an academic pandemic come fall,” Rivera shared. His ambitious plans for every student interested in joining the summer program: three hours of live, small group virtual instruction each week and three hours of supplemental learning using an online platform. Rivera has also taken an additional step: partnering with a local university where students in the college of education will tutor children, at a 1:1 ratio, for an hour each week. “I think this could be the most productive summer we’ve ever had,” Rivera says.

Push back on plans to cancel summer programs

“Our students need as many opportunities as possible to engage with their schools,” says Amanda Aragon, executive director of NewMexicoKidsCAN. “It’s more than just an academic issue, it’s an equity issue. Summer programs are targeted to the most vulnerable, so it’s unacceptable if these programs are weakened instead of strengthened.”

Unfortunately, in New Mexico state leaders quietly announced on May 21st that they were cancelling their K5-Plus and summer extended learning programs. That didn’t sit well with Aragon, who heard from a number of enraged parents and helped channel the public pressure to prioritize summer learning into a win.

The result came just six days later: the summer extended learning program was back on. Aragon was thankful but didn’t hide her displeasure that this would have ever been up for consideration in the first place, “I just can’t get over the lack of urgency. Summer has started. We can’t have people scratching their heads and wondering what should happen in a summer that started a week ago.”

“The unique thing about Covid-19 is that its universal in how its being experienced – from teachers on the ground to partners to funders to industry leaders like AT&T, we’re trying to figure out how to get everyone on the same page and speaking the same language,” HawaiiKidsCAN Executive Director David Miyashiro told Burt Lum this week on Hawaii Public Radio. Across the country, our campaigns are engaged in the work of bringing disparate groups of stakeholders to the same table. For Miyashiro, this means adding to the coalition forming around his idea to bring internet access via school bus to remote areas of Hawaii, as well as gathering educators to discuss emerging concepts related to virtual learning.

With so many evolving needs for students and families, this work of bringing groups together to confront these difficult challenges is all the more essential. The GeorgiaCAN team hosted a summer learning conference featuring educators from across the state. In the Nutmeg State, meanwhile, ConnCAN arranged a youth townhall with legislators to discuss the food justice issues facing the Hartford school system. And at DelawareCAN, the team continued their advocacy and outreach to the immigrant community and they spoke to Telemundo about the Delaware Immigrant Fund their coalition is advancing.

Lessons from these advocacy efforts will be the centerpiece of 50CAN’s “grassroots organizing in cyberspace” webinar on Wednesday, June 10th at 3 p.m. ET. We hope you’ll register here and join us! 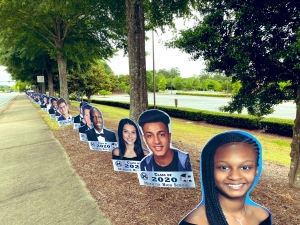 The seniors of Marietta High School, in Dr. Rivera’s district in Georgia, were greeted by the faces of their classmates during a graduation day drive-through ceremony. It stands as another example of the creative, student-centered thinking by educators who are finding a way forward through the challenges of our time.