Amidst war and chaos, Vallay’s family immigrated to the United States as political refugees. Vallay’s family arrived in a new land with nothing more than the clothes on their backs. Vallay’s parents quickly realized that they needed to put their children on an express train to the American Dream. That train was the American education system, which they believed was the key that would free them from the shackles of poverty.

Vallay’s parents believed that if their children immersed themselves in educational opportunities, they would transform their lives beyond what her parents could ever dream. Their convictions inspired Vallay to finish high school, go on to college and get a master’s degree in education policy.

Vallay served as education policy director for St. Paul Mayor Chris Coleman and as school board director for the St. Paul Public Schools. Prior to joining the city in 2006, Vallay served as a program manager at the Minnesota Literacy Council, director of the AmeriCorps Minnesota Reading Corps and as a classroom teacher at the University of St. Catherine Pre-K Education Center. In January of 2011, Vallay announced the launch of MinnCAN, 50CAN’s second state branch, as its founding executive director.

In the fall of 2014, Vallay stepped into the role of president of 50CAN. As president, Vallay oversees organizational operations, including state advocacy operations, new site development, national support services and leadership programs. She lives in Maryland with her husband and three children.

I aspire to be like Minnesota State Senator Mee Moua. Here’s why:

I aspire to conduct myself in the likeness of former Minnesota State Senator Mee Moua, the first Hmong American woman elected to state office. Senator Moua spent her tenure advocating for progressive policies that affect middle-class Minnesotans, the working poor and young people. Her small stature but booming voice provided leadership and recognition for young emerging leaders across a broad spectrum of social and political issues.

Moua secured a historical milestone for Hmong Americans with her successful election and used her post to forge bridges across cultures and nations with her thoughtful understanding and public messaging that one’s political identity can not be separated from one’s personal identity. Those who knew her integrity and commitment to the democratic process look upon her legacy fondly, and I’m especially honored and lucky to have her as my big sister.

I love my job because I’m constantly challenged to do more, to do it better and to do it smarter.

Education is core to my personal and professional life. I have two children in public schools and a third one who will join them soon. I am a former public school board director, a proud auntie to nine nieces and nephews who attend public schools, a sister-in-law to an elementary school principal and a daughter-in-law to a former special education teacher.

I’ve experienced first hand the frustrations many mothers feel everyday in America when my son didn’t have an opportunity to attend the public school of our choice because we didn’t live in the right neighborhood.

His limitations fuel my drive to ensure that all children have access to great public schools in their community.

I’m terrible at appreciating the beauty of caterpillars and the adventure of extreme heights.

The Statue of Liberty is a symbol of immigration and the promises of a new life in America. The trajectory of my life, moving from political asylum to political involvement, is a direct result of the opportunities my education gave me, and I’m at 50CAN to make sure all kids get the same chance I got. 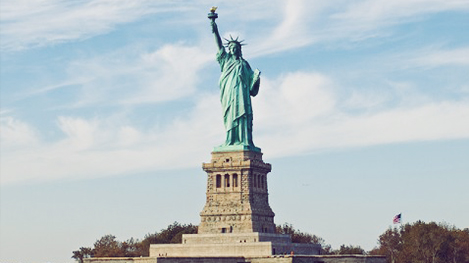